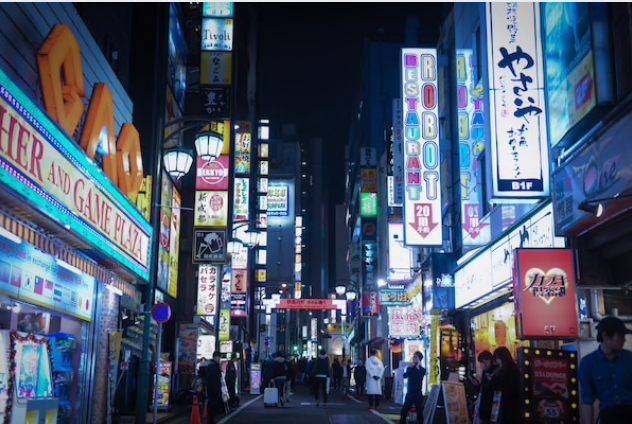 Illuminated signs in Tokyo's Shinjuku district on July 21, 2018. Entertainment will look quite different in virus-era Japan. MUST CREDIT: Bloomberg photo by Noriko Hayashi

Singing your heart out at karaoke boxes may never feel the same in Japan in the coronavirus era.

To encourage customers to return following the lifting of the state of emergency, the Japan Karaoke Box Association has drafted a set of guidelines detailing recommendations on how the industry can safely resume. They call for a limit on how many people can be in one box -- typically a small booth smaller than a motel room -- and for people to wear masks "and/or other protective gear that covers the eyes and face" while belting out the latest hits.

A national pastime and cultural export, karaoke unfortunately ticks every box in the government's guidelines of environments to avoid: crowded, cramped and potentially laden with virus-carrying droplets. But that didn't stop customers from lining up outside outlets of Manekineko, Japan's largest karaoke chain, as they reopened for business on Wednesday in Kanagawa, south of Tokyo.

"We're asking for everyone except the person singing to wear masks," said Hitomi Baba, a spokeswoman for chain operator Koshidaka Holdings Co. "We're also giving out a mask to each customer where possible, and where we can't, giving disinfectant sheets instead." About half of the chain's 527 outlets across the country have resumed business.

Japan lifted its state of emergency nationwide on Monday, as new infections and overall hospitalizations dropped to fractions of the peak. The government has warned people they must adjust to a "new lifestyle," with recommendations covering everything from how to commute and shop to the right way to enjoy leisure and hobbies.

Some recommendations may be easier to obey than others, however. An organization representing theme parks, including the operators of Tokyo Disney Resort and Universal Studios Japan, unveiled a set of measures to reduce risk at the parks. Among the recommendations was one calling on customers to refrain from screaming on roller coasters and attractions and, of course, to wear masks while on the rides.

Countries around the world are cautiously reopening their economies as people try to resume a sense of normality while mindful that the virus could return in second waves until there is a vaccine for widespread use.

People in Japan have begun to speak of the "With Corona" era, meaning a time in which people live with the virus as part of their everyday lives and try to reduce risk of infection, instead of sheltering at home to avoid it. Japan's approach to the pandemic has assumed that the virus won't be wiped out, with small clusters already spreading days after the emergency was declared over.

Amid lingering questions over why Japan hasn't seen anywhere near the level of cases and deaths from the virus as other countries, the nation's experts have credited advice given early in the pandemic to avoid what they term the "Three Cs" -- closed spaces, crowded places and close-contact settings where the virus is thought to spread most easily.

The seven-week loose lockdown -- which requested some firms to close and urged residents to stay home, albeit no penalties for disobedience -- has pushed many businesses to the brink, and left industries scrambling to create environments where customers will feel safe spending.

"Companies that don't take care of their customers will be subject to fierce criticism if it comes to light," said Tomoki Inoue, chief analyst at NLI Research Institute. "That's a risk, so everyone will be looking to turn behavior into daily habits."

Japanese TV shows will begin filming again, with one widely reported book of guidelines from Nippon TV calling for kissing and action scenes to be avoided to the extent possible, no meetings over lunch, and for actors to dress and microphone themselves.

"Japanese organizations like to create rules," said Rochelle Kopp of Japan Intercultural Consulting, who advises and trains Japanese firms. "And Japanese individuals like to have rules so they know what's appropriate or not. Going along with what the rule is, what has been determined, is very important."

In Tokyo, the metropolitan government has laid out a three-stage reopening road map for when businesses can resume operations. While the government can't force businesses to close during the pandemic, a name-and-shame campaign against outlets that defied calls to voluntarily close, such as pachinko parlors, was highly successful in securing cooperation. Karaoke booths can resume in stage three, while gyms may be reopened in stage two of the plan, which is reported to begin as early as Saturday.

High-end fitness gym operator Rizap Group Inc., which saw its shares drop as much as 59% this year during the pandemic as it closed outlets, has gone as far as announcing that it will provide coronavirus antibody tests to more than 6,000 employees and trainers, and in principle test all new clients.

"We have established our own safety and security standard protocol, 'Rizap Standard With Corona,' as a new normal, developed under the guidance of infectious disease control doctors," the company said in a statement.

One sector that has yet to get guidance from the authorities is Japan's nighttime entertainment sector, known as "mizu shobai," meaning "the water trade," which spans everything from casual bars where young women chat to customers to prostitution, which is in large parts legal.

Hostess bars, where female escorts pour drinks and chat with multiple tables of men throughout an evening, have been particularly singled out as a source of multiple infection clusters. The government has continued to urge people to avoid them, with several of the recent cases identified in Tokyo linked to such outlets, according to an NTV report.

With no end to the situation in sight, some have resorted to opening hostess bars online to alleviate the financial hit. Customers can choose a bar of their choice, and chat and virtually drink with a hostess or other customers in an webcam "nomikai" or drinking session.

Whether it's a small bar or a fairly large one, you can't avoid close-contact settings with these places as hostesses need to socialize with customers, said Mayuko Igarashi, who started an online bar. "We launched it May 14 and it's been full house the past four, five days."