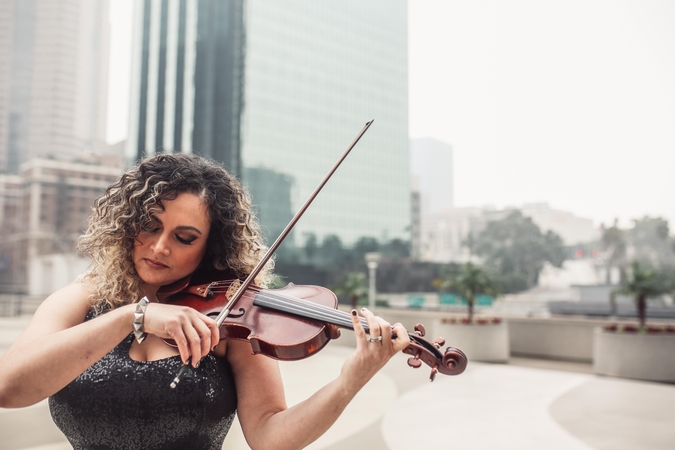 For one of the 10 new Library of Congress commissions, violinist Jannina Norpoth is collaborating with composer Niloufar Nourbakhsh. MUST CREDIT: Handout photo by Laura Ise

The limbo of this extended quarantine has forced us all into a state of increased resourcefulness. This has been especially true for artists, curators and musicians, whose outlets for sharing their work have been swiftly limited to laptops and balconies.

Take David Plylar, lead curator in the music division at the Library of Congress. In considering how he could continue the library's mission to commission new music (about 600 pieces since 1925), Plylar reached for an idea he's had on his bookshelf for 20 years.

When he was in school studying music composition, he read "The Decameron," 14-century author Giovanni Boccaccio's masterful collection of 100 stories as told by 10 acquaintances isolating from the bleakest stretch of the plague in a secluded Italian villa.

"I always wanted to write a piece about it, doing something with this idea of having multiple viewpoints presented," Plylar says in a phone interview. "But of course, the problem was that I was just myself and didn't have time to do 100 pieces."

He still doesn't. But Plylar did detect parallels between Boccaccio's tales - which served as tethers to a world left behind by its sheltering tellers - and our current circumstances.

Working with other curators and specialists at the library over the past month, Plylar assembled 10 pairs of composers and performers to collaborate remotely on short solo compositions (between one and three minutes) that he's calling the "The Boccaccio Project." The pieces will be recorded and premiere on the LOC website over 10 days starting June 15 and continuing on weekdays through June 26.

Though taking only structural cues from "The Decameron," Plylar expects the 10 works - the manuscripts of which will be archived by the library - to be as wide-ranging in tone and tenor as the text's 100 tales, largely due to the project's unique pairings and the unusual demands of remote collaboration.

Violinist Jannina Norpoth of the New York-based PUBLIQuartet and composer Niloufar Nourbakhsh both had operas in progress when the pandemic struck and cleared their calendars.

"I was so uninspired to finish [the opera], I was really creatively kind of dead," Nourbakhsh says over a Zoom call. "And then when this came up, because it's so short and we have to get it done so quickly, it just gave me a lot of creative energy. It got me out of the hole that I was in."

Norpoth, her neighbor in hard-hit Brooklyn, could relate. "As somebody who thrives off of working with other people all the time," she says, "a lot of the places where I gather inspiration are just not there right now. So this was a really nice way to connect, even virtually."

Nourbakhsh's piece for Norpoth, "A Shared Solitary," incorporates field recordings of the city (specifically its noisy nightly celebration of health-care workers) as well as a delay system she created in the programming language Max. At first, Norpoth's notes stretch out and gently overlap, but over three minutes, their sound gradually tightens toward an ecstatic climax. Things change fast, it seems to say. But Nourbakhsh's elastic approach to time and the music's mediation through technology both feel like ways to capture this unsettling moment, if only for a few minutes.

Elsewhere in New York, composer and sound artist Miya Masaoka hasn't left her high-rise apartment since early March. The pandemic forced cancellations of two premieres - an orchestral work and a Noh opera - a residency and a commission.

For her, the opportunity to quickly collaborate with cellist Kathryn Bates of the Del Sol quartet was a way for a familiar relationship (Masaoka wrote a string quartet for Del Sol in 2010) to explore an uncertain condition.

Her piece for Bates, "Intuit (A Way to Stay in This World)" reflects this shifting sense of the present, capturing everything from the dizzying influx of daily data to the intense compression of our attention spans.

"You're in this moment and you're just trying to keep your feet on the ground," Bates says of Masaoka's piece. "There are these ebbs and flows in the way the music moves. For me, it's what it's like to be in this present. Every minute is different, every hour is different. It feels like it's never going to change and yet it's constantly changing."

For both artists, Plylar's initiative offered a way to be heard beyond the walls of their apartments, but also a heartening signal that they're not alone in trying to keep the music going.

"I think as individual artists, we're maybe already able to pivot very quickly," Bates says. "But to see the great stuff that's happening as the organizations are able to do things they've never done before, I think that's really fantastic."

And the feeling is mutual for Plylar, who, after just a few weeks, has already started receiving finished scores. He expects the forthcoming recorded performances to be enhanced by their tight timelines and technological constraints - features that lend the project a documentary subtext and "show what the situation is in a real way."

"I'm amazed to see how adaptable these musicians are to the circumstances in which they find themselves," he says. "We're kind of embracing this element of making do with what you have."