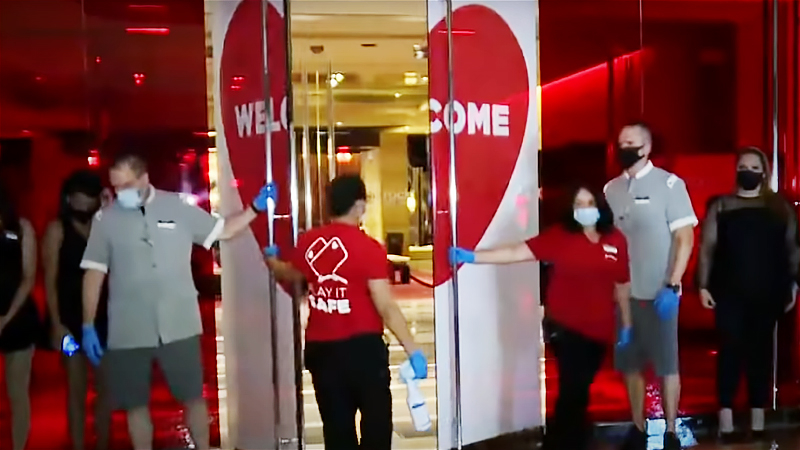 NEW YORK - On Monday, 100 days after the first coronavirus case was confirmed in New York City, the city that was once the epicenter of America's coronavirus pandemic began to reopen.

Gears of New York's great economic machine that had gone idle for months began to turn as the city eased out of a stay-at-home order. Democratic Mayor Bill de Blasio estimated that between 200,000 to 400,000 workers returned to work throughout the city's five boroughs.

"All New Yorkers should be proud you got us to this day," de Blasio said at a news conference Monday morning at the Brooklyn Navy Yard, a manufacturing hub.

Monday marked the first, limited phase of a four-part reopening plan. Wholesale sellers and manufacturers were allowed to resume business and the construction industry made its noisy return. Workers in hard hats swarmed a site in south Queens, installing walls and machinery within the skeleton of a tower that had been mostly hollow since March.

Florists, clothing shops and other retail establishments that have been shuttered for weeks welcomed customers to pick up goods at the curb - with masks and social distancing required. The Brooklyn Grange, a 5.6-acre farm that grows herbs and vegetables on three large roofs in New York, will host its first rooftop farmers market of the season on Saturday and Sunday, said co-founder Anastasia Cole Plakias.

The gradual reopening of New York does not mean the city is returning to the way it was before the coronavirus, said New York City health commissioner Oxiris Barbot. She cautioned that people with weakened immune systems, the elderly and others who are at high risk for serious complications from the coronavirus should stay indoors as much as possible. She urged New Yorkers to wear face coverings outdoors, vigorously wash hands and use hand sanitizer.

"We're still in what I would say is a moderate transmission phase," Barbot said. "There are still, on a daily basis, hundreds of people that are newly diagnosed with covid-19. "

More than 207,000 have tested positive for the coronavirus in New York City and more than 25,000 have died.

Many businesses remained closed. In Lower Manhattan, where City Hall and most city agencies are based, lunch spots were still closed or boarded up. Vehicle traffic was light and there was a fraction of the foot traffic that would normally clog sidewalks. In Foley Square, a few people sat on benches, enjoying the springtime weather.

The park, which is across the street from the headquarters of the New York City Police Department, state and federal courthouses and a major federal agency building, has been the site of protests over the death of George Floyd; one began Monday afternoon.

Transit riders appeared to show up on buses and subways in increased numbers Monday. Over the past three weeks, the system has seen ridership increase by 20,000 to 25,000 passengers per day, said Tim Minton, a spokesman for the Metropolitan Transportation Authority.

Ridership bottomed out at around 500,000 trips on April 9, Minton said; by the end of last week it had risen to 1.5 million across the subway and buses.

De Blasio announced a plan Monday to create 20 miles of new bus lanes by October, which the city estimated will serve 750,000 daily riders.

The agency did not have an official head count for Monday's commute, though Minton and interim MTA president Sarah Feinberg said they anecdotally observed more people than in previous days.

Over the weekend, workers stuck decals and stenciled markings to subway car floors in six-foot increments to encourage social distancing. The city deployed 800 school safety agents to subway stations to distribute masks and hand sanitizer in tiny squirt bottles. The transportation agency plans to give 2 million masks to riders.

The subway will continue to shut down from 1 a.m. to 5 a.m. to disinfect and clean the train cars until the pandemic is over.

Among the masked riders who took the subway Monday morning was New York Democratic Gov. Andrew Cuomo. He greeted other straphangers with a wave or an elbow-bump.

"Reopening of New York City - we did it all based on data and facts," Cuomo said at a news conference Monday.

New York City is the last place in the state to start reopening. It must meet several thresholds to continue with the reopening plan, such as keeping the hospitalization rate below two per 100,000 residents. Testing - with rate of at minimum 30 per 1,000 residents - and tracing are two key metrics that allow restrictions to lift. Jackie Bray, the deputy executive director of New York City's Test and Trace Corps, said that the city recently set a record by testing 33,000 New Yorkers in a single day. More than 3,000 tracers have been hired to follow up with possibly exposed contacts.

"We called 100% of every contact listed where we had a phone number," he said.

Officials urged people who participated in protests against police brutality to get tested for the coronavirus and said they would be monitoring for a spike in infections over the next two weeks. There are more than 150 locations citywide where people can receive a free coronavirus test.

Stay-at-home orders such as New York's prevented 60 million coronavirus cases in the United States, per an estimate published Monday in the journal Nature.

In the second phase of reopening, retail and office work can resume; in the third, restaurants can seat customers; in the fourth, schools, arts, entertainment and recreation return. The city must remain in a phase for at least two weeks before it progresses to the next.

The reopening comes after months of suffering. The outbreak summoned legions of out-of-town medical workers, the National Guard and a Navy medical ship. White tents of a field hospital went up in Central Park. The intensive care unit was chaotic inside Manhattan's Mount Sinai Hospital at the height of the pandemic, said 24-year-old nurse KP Mendoza.

Patients were doubled up in small rooms. "We're trying to keep our I.V. pumps outside the doors," Mendoza said, though nurses would step on the tubing by accident. "It's messy, it's hard." As he went to sleep he lit lavender candles to erase the hospital's deathly odor.

Hospitals ran out of rooms to treat patients and transformed lobbies and cafeterias into ICUs. Some ran out of space to store the dead. In April, police found dozens of bodies stacked in two moving trucks parked outside a Brooklyn funeral home.