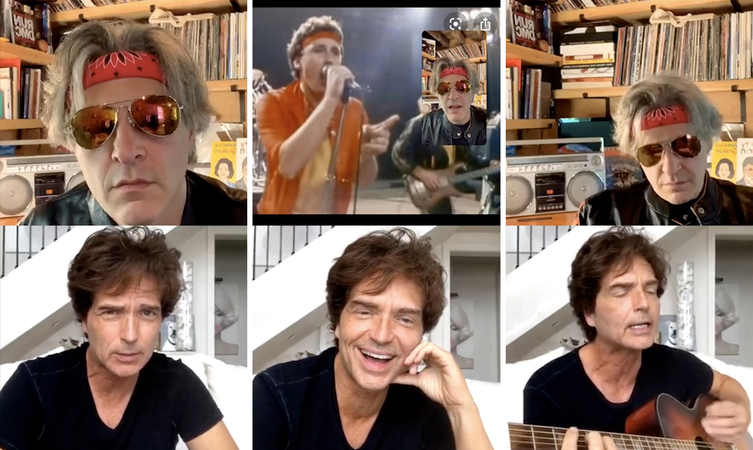 Richard Marx is webcasting during the pandemic

Like so many, national arts reporter Geoff Edgers has been grounded by the coronavirus. So he has launched an Instagram Live show from his barn in Concord, Mass.

Every Tuesday and Friday afternoon, Edgers hosts "Stuck With Geoff," an hour-long show with whoever will take his calls. So far, that has included musician David Byrne, Bill Nye "The Science Guy," singer Annie Lennox, and actress Marlo Thomas and her husband, talk-show veteran Phil Donahue.

Recently, Edgers chatted with pop singer Richard Marx, 56, from his home in Malibu, Calif. Here are some excerpts from their conversation.

Q: So your voice is impeccable and the falsetto, it's all there. But I'm curious. My son, who's 10 and plays guitar, is obsessed with getting an autotune pedal. Have you used autotune? His feeling was it wasn't even about fixing the notes. It was because many of the songs he hears have that sound in it. He wants to re-create that.

A: He's absolutely right. And I was sort of on this get-off-my-lawn kind of bandwagon about never using autotune for people who can't really sing. And then I listened to new music, to what's on the radio. And there is a sound that the autotune processing creates. In some cases, people need it because they can't sing in tune. But if you're not insecure about it, sometimes it's a really cool effect.

Q: The Beatles, they used effects in their voices. And I know John Lennon was very insecure about his voice and would multiple track it. My boy loves Harry Styles, who performed a version of Peter Gabriel's song "Sledgehammer" on Howard Stern's show.

A: I love Harry Styles, and I love the way the way he does it. But if I knew him, I'd be like, 'Dude, you're being so faithful to the Peter Gabriel version." I would love to hear him sort of (mess) with it a little bit. Because I always feel like if you're going to be really faithful to a song in a performance, then you're just going to be constantly compared to the original as opposed to sort of doing it your own way.

Q: Now we're in this lockdown. You're in Malibu, and I keep getting notes from your publicists and they're like, "Richard's launched this podcast called 'Social Distancing.' " You've got like two videocast things. What's going on? Why are you launching so many projects that have no clear revenue source?

A: (Laughs.) The short answer is I was filling time to avoid my anxiety. The first couple of weeks, my wife (former MTV personality Daisy Fuentes) and I were, you know, we were acutely aware of how fortunate we are to be going through this in the way that we are. We have each other. But there was still a lot of anxiety about our three sons, grown men. I worry about them because I'm a dad. I have an 84-year-old immunocompromised mother. There were just a lot of things that were weighing heavily on me, and I found it was just a really great distraction.

I've had no experience with this kind of thing (podcast on Zoom). But it's been really fun. You know, people I've never met before. And we've posted it. I met Paul Stanley from KISS. We had the greatest conversation, and we text each other now. I met (designer) Steve Madden a week or so ago. He was really fascinating. I wouldn't be arrogant enough to say that I'm interviewing these people as much as just chatting with them.

Q: A couple of weeks ago, I covered my first assignment out of my barn in a long time. I covered a concert in New Hampshire as the first sanctioned concert, and it was a guy on a stage they built outside a venue called the Tupelo Music Hall. You know that place.

A: Yeah, I played there. I did my solo acoustic show there last year.

Q: Great place. I mean, you played there, Richard Thompson, Buddy Guy. What they did was build a stage outside and they numbered parking spaces. Seventy-five spaces next to where you could put your chair. You weren't allowed to wander in any way, and they just had a guy on the stage. It was really a test and it went OK, but the energy was different. What's your kind of comfort level, or when do you actually get out there and perform again?

A: That's a really good question, and I think it's going to be much like the reopening of state by state. I think it's going to be a gradual process. And anything could happen. I think what we're probably going to see over the next few months are things like you just described or where everybody's in golf carts, distanced. There are going to be several iterations of it as we go. And then we probably are going to get hit with the second wave and all bets will be off again and again. It's one of those weird things, especially because I tour. Probably 75 percent of my touring is just me, solo acoustic.

I don't think we're going to really see what it's going to look like for at least six or eight months. All my concerts for 2020 have been rescheduled to early 2021. But who knows? I get messages on social media all the time from people. Is the London show still gonna happen? Who knows.