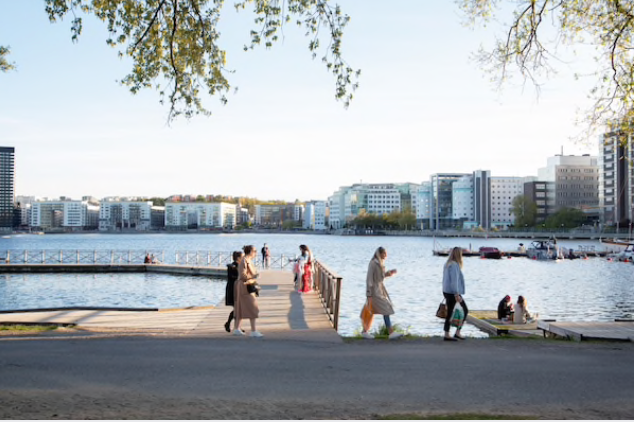 A group of people socialize on a jetty on the water's edge in Stockholm, Sweden, on May 22, 2020. MUST CREDIT: Bloomberg photo by Loulou D'Aki

Sweden has made less progress than expected in achieving immunity to the coronavirus, according to its state epidemiologist.

After leaving schools, shops and restaurants open throughout the pandemic, contagion rates in Sweden are much higher than anywhere else in the Nordic region. Its covid-19 mortality is among the worst in the world. Scientists have been eager to learn whether the flipside of widespread contagion is a higher level of immunity.

But according to Anders Tegnell, Sweden's state epidemiologist, "the trends in immunity have been surprisingly slow." He also says "it's difficult to explain why this is so."

Speaking in an interview with Swedish Radio on Wednesday, Tegnell said it's important to remember "that there is a time lag in all such measurements."

An analysis of 50,000 tests by Werlabs, a private company, shows that about 14% of people tested over the past six weeks in the Stockholm region have developed covid-19 antibodies. That compares with a study published this month of Bergamo -- once the covid-19 epicenter in Italy -- which showed that 57% had developed antibodies.

In Sweden, "the number of immune cases today is much closer to our forecasts than it has been before," Tegnell told Swedish Radio. "The 14% of those surveyed is from two or three weeks ago, meaning that immunity levels are higher today."

Sweden's approach to tackling covid-19 has been among the most controversial in the world. Unlike the rest of Scandinavia, where governments quickly imposed strict lockdowns, Sweden advised its citizens to observe social distancing rules, but left most of society open.

Some analysts have predicted that the softer lockdown means Sweden's economy will fare better than others. But the country's high death rate has triggered considerable backlash, and a recent poll suggested most Swedes have lost faith in their country's strategy to fight the virus.

Tegnell and Prime Minister Stefan Lofven have insisted that Sweden's strategy is the right one. That's based on an assumption that covid-19 will be around for a long time, meaning short-term lockdowns ultimately won't help, and governments need to come up with more sustainable models for living with the virus.