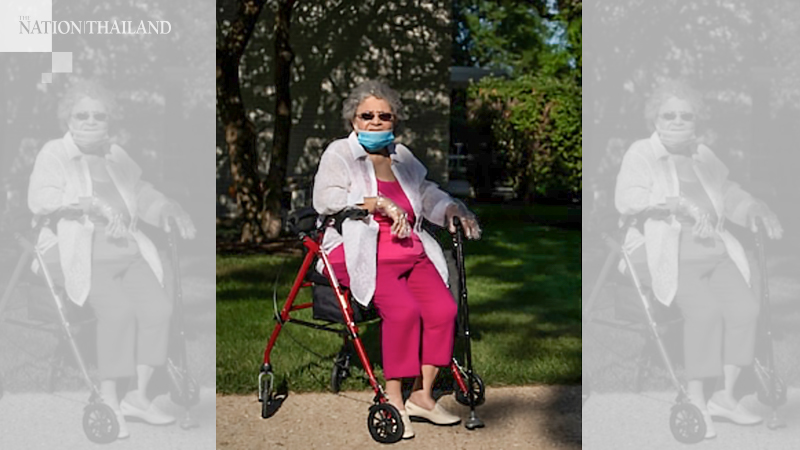 Lois Travillion, 82, a retired Chicago math teacher and school administrator, has had two friends die of covid-19. "A lot of people have lost folks, and who knows who will be next?" she said. MUST CREDIT: Photo by Youngrae Kim for The Washington Post

Nearly 1 in 3 black Americans know someone personally who has died of covid-19, far exceeding their white counterparts, according to a Washington Post-Ipsos poll that underscores the coronavirus pandemic's profoundly disparate impact.

The nationwide survey finds that 31 percent of black adults say they know someone firsthand who has been killed by the virus, compared with 17 percent of adults who are Hispanic and 9 percent who are white. 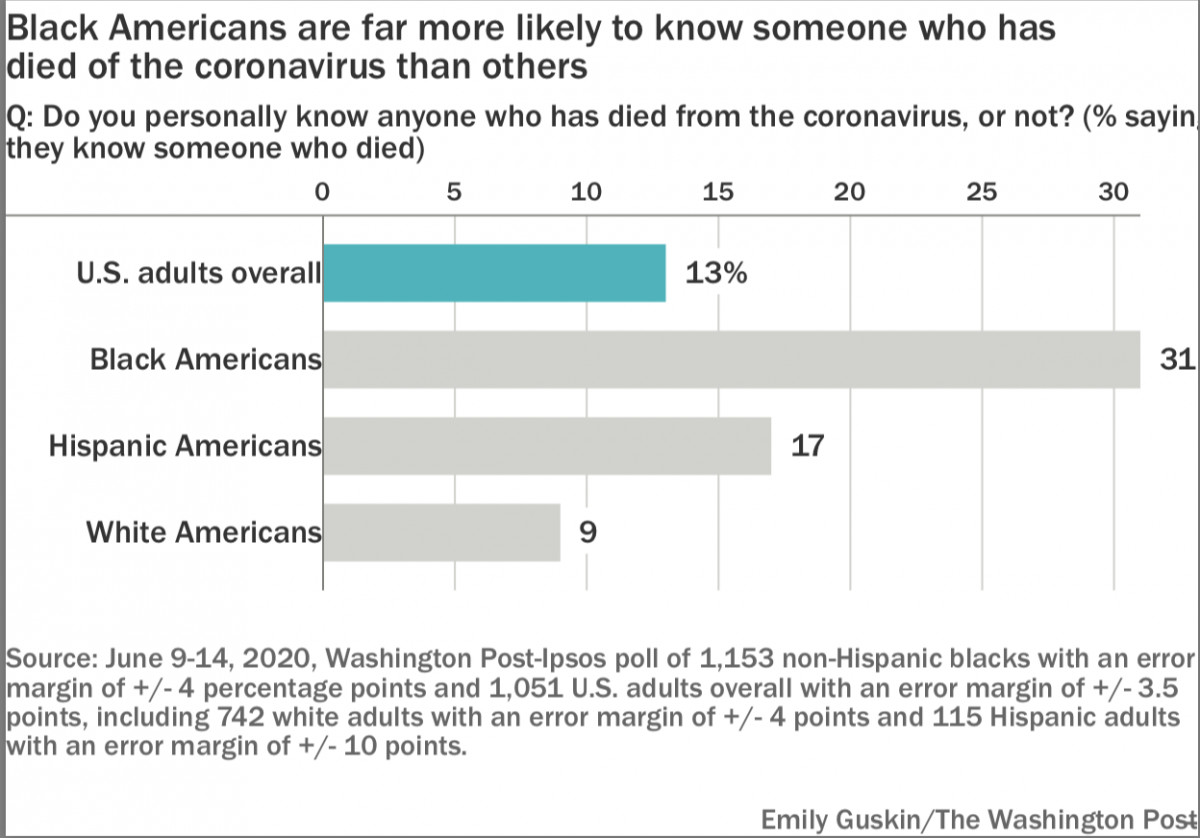 Adding in those who know someone with symptoms consistent with covid-19, slightly more than half of black Americans say they know at least one person who has gotten sick or died of the disease caused by the novel coronavirus. Fewer than 4 in 10 white or Hispanic Americans say they do.

Taken together, the poll's findings attest to sharp racial differences in the sense that the virus is close at hand, after nearly a half-year in which it has sparked the nation's worst public health calamity in more than a century.

According to authorities on health disparities, those differences arise from the nation's deep-seated socioeconomic inequality and help explain the recent spasm of unrest across much of the country in a drive for racial justice.

"This pandemic has really unearthed - shone a real bright light on - the ways these disparities should not be accepted and are not tolerable," said Joseph Betancourt, vice president and chief equity and inclusion officer at Massachusetts General Hospital in Boston.

The differing close-up exposure to the virus's ravaging effects is accompanied by divergent attitudes about the best way for the country to recover. Asked whether it is more important to try to control the spread of the coronavirus or to try to restart the economy, even if one hurts the other, 83 percent of black Americans say trying to control the virus is a higher priority.

By contrast, when the same question was asked in a Washington Post-ABC News poll last month, just about half of white Americans said trying to control the virus is more important.

The differences in proximity to coronavirus sickness and death align, too, with political attitudes, the survey shows. More than 8 in 10 black Americans say that, in deciding which presidential candidate to vote for in the November election, the coronavirus outbreak will be one of the most important factors or very important. Nearly as many Americans who are Hispanic say they hold that view - but fewer than 6 in 10 who are white say the same.

The poll's central findings - the frequency of knowing someone killed by the virus - hold a mirror to the well-established pattern that the coronavirus has made its deepest inroads in the United States among black Americans. The virus has been more likely to infect black Americans and more likely to have a devastating effect on their bodies if they contract it.

"A lot of people have lost folks, and who knows who will be next?" said Lois R. Travillion, 82, a retired Chicago math teacher and school administrator who has had two friends die of covid-19.

In early April, Travillion got a call that a former co-worker in the Chicago school system - a man whom she still saw now and then and still played in his own band - had died of the virus.

Travillion said the other was a man, sharp and mobile in his mid-80s, who always sat two seats away from her at the monthly seniors breakfast, followed by Bible study that she attends at St. Stephen AME Church. Next thing she knew, he was infected, in the hospital, on a ventilator. On one of the last days of April, he died.

She found out just last Sunday that a member of her own church, Kelly Woodlawn United Methodist, had tested positive and is quarantining at home. And another man she knows, Travillion said, "was on a ventilator for a long time - and we thought he wasn't going to make it, but by the grace of God, he pulled through."

When she was a young woman still living in Mississippi, she took part in a 1963 Woolworth lunch counter sit-in to protest segregated seating. When she was new to Chicago in the late 1960s, she took part in the Black Manifesto, a set of demands to improve education at a high school where she taught.

The past months, she has shut herself in against the virus, relying on a former student to bring her groceries, wearing a mask when she walks down the hall to empty trash in the incinerator in the complex where she lives near Lake Michigan.

"People's lives are more important" than focusing on restoring the economy, Travillion said. "There are so many people who have died. You won't even need the economy because there won't be anybody around."

Lester Danner, 28, who lives in northwest Mississippi, has the same view. "It's important to control the virus because we have a walking-dead society with the virus in the air," he said. "A lot of people have died."

Early on, a cousin got infected working in a nursing home laundry, Danner said. But she did not develop symptoms.

Then, an aunt called to tell him a family friend's brother had died. He got sick in March, held on for a month in a hospital, then succumbed. The man and Danner's father were born on the same day 66 years ago.

And now, just across the Tennessee line in Shelby County, cases are spiking - 400 new cases one day this week, more than twice as many as any day in March, April or May. Last week, the city council in Memphis, the county seat, voted to require residents to wear masks in public.

"People, they were so excited to be out of quarantine, they probably thought it would be okay, but now we are getting another wake-up call," said Danner, who does branding and marketing work. "You can't take anything for granted."

According to the poll, there is not much difference among racial and ethnic groups in the proportion of people saying they know someone who has had possible symptoms of covid-19 but do not know anyone who died. Among white Americans, 28 percent say they know someone with symptoms. That is slightly higher than among black and Hispanic Americans, both at 21 percent.

It is the proximity to death that is stark. Among black Americans, the percentage knowing someone who died increases steadily with age. Nearly 1 in 4 adults younger than 35 say they know someone, compared with more than 4 in 10 people 65 and older.

The findings are "a true indication of reality," said Betancourt, of Massachusetts General Hospital.

He said people of color in the United States tend to live with "a series of preconditions" that put them at greater risk of becoming infected with the virus and of then faring poorly. They include higher rates of poverty and the varied effects of structural racism, Betancourt said. The downstream effects, he said, include crowded housing, more frequent asthma, diabetes and other chronic diseases, and a greater likelihood of being in jobs that do not allow them to work from the greater safety of home.