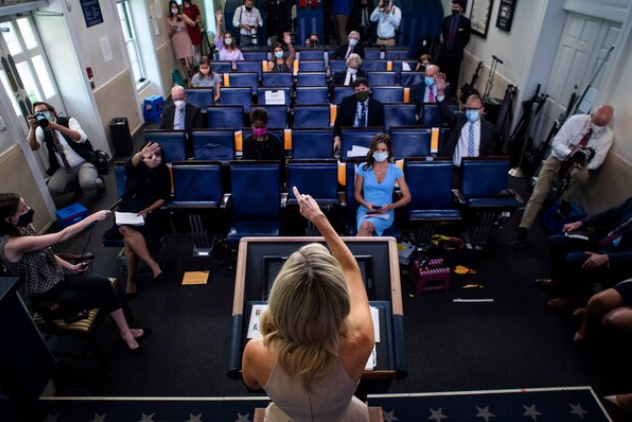 The GOP-led city of Jacksonville, Fla. - which President Donald Trump recently selected to host many of the Republican National Convention festivities in part because of its relatively lax public health restrictions - is now mandating that people wear masks at indoor public spaces. And even Sean Hannity and Steve Doocy, two of Trump's most fervent and loyal boosters on Fox News Channel, have joined the chorus of mask advocates.

"I think that if the president wore one, it would just set a good example," Doocy said Tuesday on "Fox & Friends" as he interviewed Republican National Committee Chairwoman Ronna McDaniel. "MAGA should now stand for 'masks are great again.' Let me give you some marketing advice right there."

McDaniel chuckled and said she would "take that under consideration" - but her laugh underscored the reality that Trump is unlikely to change his campaign slogan.

The president has refused to trumpet his own administration's recommendation that people cover their faces. He he has set an example by not wearing a mask at public events, and he has used his bully pulpit to mock others who do and to cast doubt on the efficacy of masks.

But with coronavirus cases soaring across the nation - and most precipitously across Florida, Texas and other parts of so-called Trump Country - many prominent Republicans are now echoing the pleas National Institute of Allergy and Infectious Diseases Director Anthony Fauci and other health experts that people wear masks to slow the spread of the virus and to help the economy reopen safely.

The recent shift on the political right has left Trump isolated, with the president and his White House staff openly resisting the calls for mask-wearing.

"The president has said he has no problem with masks, that he encourages people to make whatever decision is best for their safety and to follow what their local jurisdictions say," White House press secretary Kayleigh McEnany said Tuesday. "CDC guidelines are still recommended but not required, and the president is the most tested man in America."

That is a marked contrast in tone from other elected Republicans, who have been talking about the issue in recent days with fresh urgency. Particularly among GOP senators, there has been a noticeable uptick in public comments and social media posts proactively encouraging the public to adorn masks as the number of infection rises nationwide.

Sen. Tim Scott, R-S.C. - who usually wears a flag-emblazoned mask on Capitol Hill - tweeted Monday that wearing a mask is "one of the simplest and easiest ways to help stop the spread of #COVID19." Sen. Chuck Grassley, R-Iowa, the second-oldest member of the Senate, on Monday posted a photo on Instagram of himself wearing a mask with the logo of the University of Northern Iowa with the caption, "everybody's got to do their share."

McConnell told reporters on Tuesday, as he waved his Washington Nationals logo mask, "What we're all trying to demonstrate for everybody in the country is, the single most important thing you can do - not only to protect yourself but to protect others - until we get a vaccine, is put on a mask. It's not complicated."

At a coronavirus hearing Tuesday, Senate Health Committee Chairman Lamar Alexander, R-Tenn., said, "Unfortunately this simple lifesaving practice has become part of a political debate that says: If you're for Trump, you don't wear a mask. If you're against Trump, you do. That is why I have suggested the president should occasionally wear a mask even though there are not many occasions when it is necessary for him to do so. The president has millions of admirers. They would follow his lead."

Michael Steele, a former RNC chairman, said Republican leaders have hardened their position on masks simply because the virus is infecting "the heart of their base, which we all knew it would."

Residents in so-called red states, Steele said, "don't have superpowers and aren't somehow immune from the ravages of covid-19. That's why it was paramount for the president to be the voice of leadership here, not to undermine the scientists, not to berate the Dr. Faucis of the world. And now Fox says the president should set a good example and put on a mask. Really, now? After 120,000 deaths? After a million-plus people get infected?"

The rise in cases has not changed the thinking inside the White House. Officials there have long defended the rejection of masks by Trump and many on his staff members by arguing that he and anyone who comes into close contact with the president is regularly tested for the coronavirus.

Vice President Mike Pence has worn a mask on several recent occasions, including a trip over the weekend to Texas, one of the nation's virus hot spots. He decides when to cover his face based on state and local guidelines as well as a predetermination of whether social distancing can or cannot be maintained, according to a White House official.

When Trump travels Friday to South Dakota to participate in an Independence Day fireworks celebration at Mount Rushmore, masks will be available but not required, and there will be no social distancing mandates.

"We told those folks that have concerns that they can stay home, but those who want to come and join us, we'll be giving out free face masks, if they choose to wear one. But we won't be social distancing," South Dakota Gov. Kristi Noem, a Republican, said Monday on Fox News.

At Saturday's "Salute to America" fireworks extravaganza, which Trump is hosting at the White House, social distancing will be observed and facial coverings and personal hand sanitizer will be provided to guests, according to White House spokesman Judd Deere.

The enthusiasm for mask-wearing among congressional Republicans is not universal. Sen. Rand Paul, R-Ky., is one of a very small minority who regularly does not cover his face on Capitol Hill. Paul, who was diagnosed with the coronavirus this year, insists that he is now immune and therefore cannot spread the virus to others, though the medical data on immunity is inconclusive.

Sen. Tom Cotton, R-Ark., one of the youngest members of the Senate, usually does not wear a mask on Capitol Hill, though he wears one in situations where he is unable to maintain much distance from others. Sen. Ron Johnson, R-Wis., was spotted carrying - not wearing - his mask into a senators-only lunch on Tuesday and said, "I haven't seen how particularly effective these are."

Health experts worldwide have strongly pushed for the use of masks to limit the spread of the novel coronavirus, and the strategy has been deployed aggressively in many countries that have been more successful in combating the virus than the United States. In the U.S., one June 16 study by researchers at the University of Iowa found that states with mask mandates had an associated decline in the growth rate of coronavirus cases.

Mask-wearing is popular with the public. An ABC News-Ipsos poll released last week found that 89% of adults who left home in the previous week said they wore a face mask, which was up from 55% in early April.

Margie Omero, a Democratic pollster whose firm, GBAO, has been regularly surveying the public on masks and other coronavirus topics, said, "Mask-wearing didn't have to be partisan. The data about mask-wearing hasn't changed. But Trump has been critical of masks, and many have been taking their cues from him. So when you see Republican leaders now suggesting people wear masks, you have to wonder whether they are just getting caught up on the science, or whether they're making a different political calculation."

Alex Castellanos, a veteran Republican strategist, said the divide over whether to cover one's face is, like many things in the Trump era, political.

"Mask wearing has become a totem, a secular religious symbol," Castellanos said. "Christians wear crosses, Muslims wear a hijab, and members of the Church of Secular Science bow to the gods of data by wearing a mask as their symbol, demonstrating that they are the elite; smarter, more rational, and morally superior to everyone else."