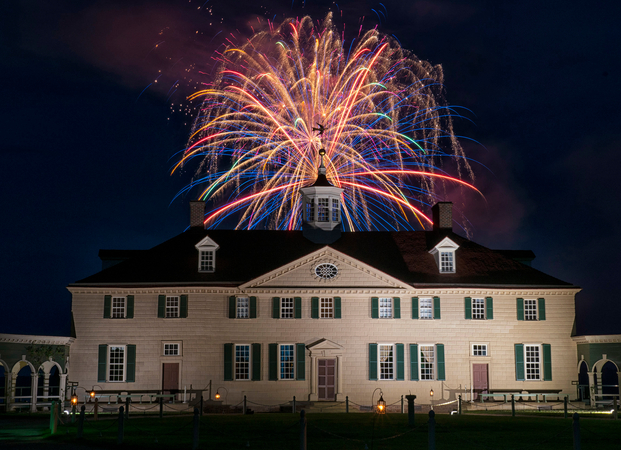 The fireworks show June 27 at Mount Vernon, George Washington's home near Washington. Attendance was restricted to 600, from the normal 2,700, and fireworks were launched from a barge anchored in the Potomac River. MUST CREDIT: Photo for The Washington Post by Kevin Ambrose

The Fourth of July show at the University of Maryland in College Park was canceled in May. The July 4 fireworks at Rockville's Woodmont Country Club was not scheduled at all.

Shows in Elkton, Md.; Middletown, Del.; North East, Md., and dozens of other places were also gone, as a result of covid-19 fears, he said.

"I've never been able to prepare for something like this," said Sagaria, who is based in Paramus, N.J. "About 90 percent of the shows canceled … It's just horrible."

While the virus has the trade in backyard fireworks booming, it has wrought havoc with the aerial fireworks display industry. Across the country shows large and small have been canceled or postponed, fireworks company officials say.

And the promise of a rare Saturday Fourth of July has turned into a fireworks bust.

Traditional displays attract huge gatherings of people, which are now deemed potentially hazardous because of the disease, the officials say.

Fireworks at big league baseball games never happened, because much of baseball hasn't happened. Memorial Day shows dried up. And the loss of Fourth of July events has been devastating.

"Many of the skies around America are going to be dark over the Fourth of July," said Stephen Vitale, chief executive officer at Pyrotecnico Fireworks, in New Castle, Pa.

While President Donald Trump's July 4 fireworks show on the Mall is still scheduled, along with one Friday at Mount Rushmore with him in attendance, the virus has taken a heavy toll on the industry.

Sagaria said he usually does 200 to 250 shows a year across the Mid-Atlantic.

"Three things happened," he said. "People never booked, or people canceled, or people fought to keep their show, and the latter is very small."

Plus, the virus hit at a bad time.

"There's a cycle every year," he said. "During the winter and spring is when we get deposits on the shows for the summer. This thing hit in the middle of deposit time.,"

The industry, much of which was brought to the United States by Italian immigrants a century ago, is appealing to the government for aid - asking Congress for help via the Economic Injury Disaster Loan program offered by the Small Business Administration.

"Typically there are 16,000 Independence Day fireworks displays across the nation," said Julie L. Heckman, the executive director of the American Pyrotechnics Association.

(George Washington's Mount Vernon managed to pull off its fireworks show on June 27 by restricting attendance to 600, from the normal 2,700, and shooting from a barge anchored in the Potomac River.)

"They are so desperate," she said. "This is by far the biggest crisis this industry has ever faced."

"Last Memorial Day we had 69 shows," he said recently. "This year we had four."

But his firm also does fireworks for the Washington Nationals, and the Philadelphia Phillies, who haven't played an inning. It does the National Cherry Blossom Festival's fireworks, which were canceled this year.

Of his usual 600 shows between July 1 and July 4, around 400 have been canceled this year. "It's been devastating," he said.

"Most revenues in the fireworks industry revolve around the Fourth of July," he said. "It can be sixty percent upwards to eighty or ninety percent of a business's annual revenue."

"The Fourth of July is our bread and butter," he said. "Most of that's gone away. We've furloughed about 70 percent of our staff and really don't have the work to bring them back."

He said his firm was started by his great-grandfather, Constantino Vitale, in Italy in 1889. "Fireworks was a village trade in Italy," he said. "A lot of the fireworks [involved] religious festivals."

In the United States, his ancestors worked in tin mills around New Castle. "They would work in the tin mills during the day, and . . . work making fireworks at night and on weekends."

Vitale, who started in the business when he was 13, said the industry has always been hardy.

"We've been recession resistant . . . because people always want to celebrate," he said. "We have not been pandemic resistant."

August Santore, of Garden State Fireworks, in Millington, N.J., has the contract for the fireworks on the Mall, his company's biggest show. But he was long in limbo, waiting to see if the show would come off.

Last week, word finally came that it was on. As he did last year, he would share the stage with another company, Fireworks by Grucci.

"It helps," he said. But damage had already been done.

"I'm lucky if I'm going to have maybe ten percent of my business for the season," he said recently. "We lost 25 [shows] maybe in April. Maybe 30 or 40 in May. Probably 80 in June. It just multiplies."

"It's terrible," he said. "If the government doesn't come up with something for our industry, I believe 75 percent of the companies are going to fold up."

At Melrose Pyrotechnics, Mike Cartolano said the firm might reach twenty percent of its annual revenue. Like others, he relies heavily on Fourth of July and sporting events.

"I've got a lot of longtime customers," he said. "My father started with the Chicago White Sox in 1960 … So we were all contracted. We were set for a banner year."

"A Saturday Fourth of July happens once very six years," he said. "It would have been a wonderful year."

Then the cancellations started rolling in.

"I get up every morning and I turn my computer on and I find more cancellations," he said.

And now companies are stuck with tons of unused fireworks that they must guard.

"There is so much explosives that are usually consumed around the Fourth of July that we now have to safely store," said Sagaria, of Fireworks Extravaganza. "Not only did we have to pay for it, we have the additional expenses of keeping it safe."

"Put it this way: Fireworks is an extremely hard business, without this," he said. "Just normally it's a hard business. The industry is small, but the patriotism is big."

Tags:
The Fourth of July