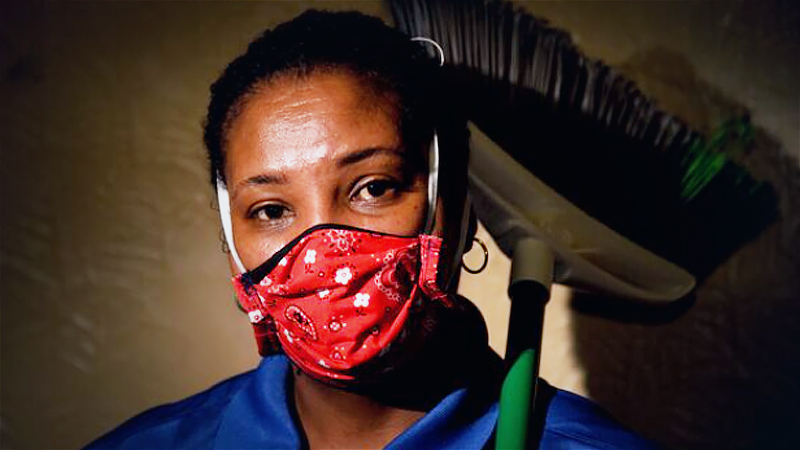 Sabrina Hopps works in housekeeping at a hospital in Washington, D.C. When her supervisor announced the room number of the first case of coronavirus at their medical facility, Hopps instantly recognized it as one she had scrubbed earlier in the day. MUST CREDIT: Washington Post photo by Jahi Chikwendiu

WASHINGTON - When a Waldorf car dealership advertised discounts for medical workers battling the novel coronavirus, Latasha Currie hoped to eke out a hard-won benefit after months on the front lines.

The medical assistant, 31, didn't tell the salesman how her 10-year-old cried for days after patients with covid-19, the disease caused by the coronavirus, began to roll into the District of Columbia clinic where she works. "She kept saying she didn't want mommy to die," Currie said.

She didn't mention her employer told her there were only enough smocks for doctors and nurses during the early days of the pandemic. Yet Currie kept taking vitals and triaging patients, worried what an errant sneeze might spread across her clothes.

"I said, 'Yeah, I'm a front-line worker,' " Currie recalled, asking the salesman about the discount. "He said, 'What do you do?' I said, 'I'm a medical assistant.' And he laughed at me. He said, 'Are you really on the front lines?' I took offense and walked out."

Doctors and nurses have been saluted from front porches and rooftops for their efforts to contain the coronavirus, but more than 80 percent of essential workers who keep medical facilities running labor out of the spotlight like Currie, according to the Brookings Institution.

Housekeepers, cooks, phlebotomists, orderlies and others face many of the same risks as their higher-profile colleagues, but sometimes with less access to protective gear, pay that can fall below a living wage and only a modicum of recognition.

With a median wage of $13.58 an hour, some of the largely female and minority cadre of nearly 7 million across the country worry they are a serious case of covid-19 away from financial ruin.

"I'm risking my life every single day just like the doctors are," said Currie, who triages patients and takes their temperatures. "I just don't want people to think that because I'm not a nurse or not a doctor, I'm not essential."

Sabrina Hopps was stunned as a supervisor announced the room number of the first patient with covid-19 at the Bridgepoint Hospital in Southwest Washington during an April meeting. Hopps instantly recognized it as one she had scrubbed earlier in the day.

The housekeeper said she had been wearing protective gear, but to be sure she was free of any virus, she went home that night, measured a cup of bleach and dumped it in a warm bath.

Her mind has gone to all the frightening possibilities. There was her health. She had asthma and had recently started carrying an inhaler. What would happen if she came down with a disease that attacks the lungs?

There was also rent on her Washington apartment. Hopps, who makes $14.60 an hour, split it with two of her six adult children. They wouldn't be able to afford it if she got sick and couldn't work.

Her doctor recommended she get a coronavirus test. After eight agonizing days, she got the news she was negative.

The days on the job since have been an effort to block every route the virus could take into her body. Hopps follows the same ritual each time she cleans the room of a patient in isolation:

She pulls the gown workers have dubbed the "trash bag" over her uniform of gray cargo pants and blue shirt. She positions her N95 mask and slides a surgical mask over it. She pulls on a face shield. She sanitizes her hands before pulling on a first pair of gloves and then a second. She sanitizes the gloves. She pulls booties over her shoes.

Hopps said she begins to sweat almost immediately as she plunges into cleaning toilets and sinks, sanitizing surfaces and mopping the floor of patients' rooms because the protective gear is suffocating. She repeats the tiring routine up to 12 times a day.

Still, Hopps said she is dedicated to her work because of the gravity of the pandemic. She said she speaks to patients to keep their spirits up. She said she's even learned to read lips to communicate with those who are unable to utter words.

"I'm nervous, but I know this is my fight, so I'm going to continue until I can't anymore," Hopps said. "God put me at Bridgepoint."

Lisa Brown, executive vice president of SEIU Local 1199 for the District and Maryland, said essential workers such as Currie and Hopps have faced a constellation of challenges during the pandemic.

She said union workers in nursing homes and a handful in hospitals had been sickened or killed by the coronavirus, but she couldn't provide exact numbers because SEIU is not always informed when workers fall ill. The union represents about 10,000 employees locally.

Other figures point to a daunting threat for health-care workers on the job. The Centers for Disease Control and Prevention reports nearly 79,000 health-care workers have contracted the coronavirus and more than 420 have died since the outbreak began. An earlier CDC report said a majority of medical workers who were sickened thought they were exposed at work.

Brown said in the early days of the pandemic, there was a tiered system for distributing protective gear that left many employees who aren't nurses or doctors without proper masks, smocks and other essentials.

She said most receive basic gear now, but there are still problems. At one Washington-area medical facility, she said, workers are sharing smocks from shift to shift. Other workers are forced to buy their own equipment if employers don't provide it.

Most workers have health insurance but must use their sick leave and vacation if they contract the virus at work, Brown said. Some have been forced to pay for taxis to get to work because cutbacks to public transit have made commuting slow and difficult.

Brown said few low-level medical workers in the D.C. area have received hazard pay, which has helped workers in other industries weather the unprecedented crisis. It's something the union has been pushing for.

"Every one of our hospitals received millions of dollars from the Cares Act, but they chose not to spend it to give extra pay or money to the workers," Brown said, referring to the coronavirus relief package signed by President Trump in March.

The Heroes Act passed by the House of Representatives in May would provide extra pay, but it faces uncertain prospects in the Senate. Essential workers would receive up to $13 an hour in premium pay on top of their regular salary or $25,000 through the end of 2020.

One of Currie's greatest fears is bringing the virus home.

"She keeps saying, 'Mommy got the coronavirus,' " Currie said of the 6-year-old. "It takes a toll on them."

Each day, Currie drops them off at her mom's house before heading to work. But she doesn't pick them up at night - at least not immediately. She heads home first, stripping off her clothes on the front porch. She takes a shower and sprays her shoes and car with Lysol.

Only then does she pick up the kids.

Brown said many medical workers are single women, heading up households like Currie, while others live with extended family so they can pool resources to pay rent or make mortgage payments.

That poses major challenges for essential medical workers who have to be on the job whether day cares are open or not and may come home to crowded houses where the virus could spread rapidly.

Some workers potentially exposed to the virus have had to turn to GoFundMe to raise money for hotel rooms or donations of accommodations by Airbnb to quarantine themselves away from family members, Brown said.

Those type of sacrifices are why Robyn Jones, a food and nutrition worker at a D.C. hospital, bristles at the celebrations of front-line workers often featured on TV broadcasts. She says doctors and nurses should be thanked for their work, but so should others.

She rarely hears anyone offer a word about the janitors, security guards or food workers such as herself.

"Since this pandemic came, yes, we are even more invisible in the hospital," Jones said.