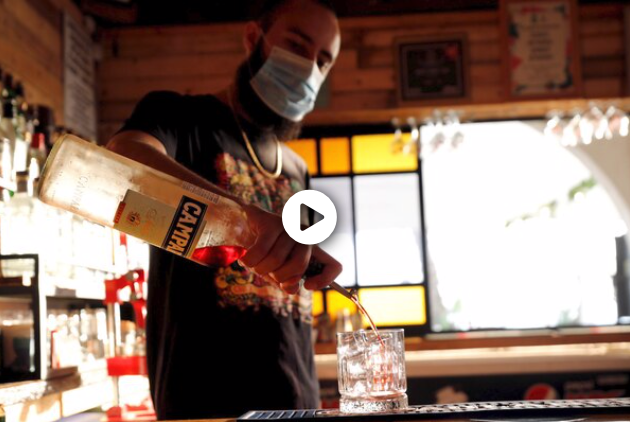 Amid a resurgent pandemic and rising hospitalizations, President Donald Trump pitted America against the world on Tuesday, moving to pull the United States out of the World Health Organization while his FBI director accused China of hacking U.S. health-care companies that are researching the novel coronavirus.

The virus's rampage across the South and West continued to drive up hospitalizations, with patients filling intensive care units and federal health officials moving to shore up testing in hot spots. The border-ignoring virus also infected another world leader, Brazilian President Jair Bolsonaro, who has repeatedly dismissed it as a "little cold."

The Trump administration on Tuesday formally notified the United Nations that it is withdrawing the United States from the WHO, a move that prompted swift criticism from Democrats and showed Trump's impulse to isolate the country even during a public health crisis. Sen. Robert Menendez, D-N.J., wrote on Twitter that Trump's decision "leaves Americans sick & America alone."

FBI Director Christopher Wray, meanwhile, blasted China for its alleged efforts to steal U.S. technology and said China is trying to penetrate companies that are researching how to defeat the virus.

His remarks came as cases and hospitalizations in the United States continued to mount. More than 50 hospitals in Florida said their ICUs are full, according to data from Florida's Agency for Health Care Administration. In another hot spot, Arizona reported 117 deaths on Tuesday, a daily record for the state, as more than 3,000 people were being treated in hospitals and ICU beds neared capacity. Texas canceled its annual state fair, the longest-running fair in the country, as more than 8,000 Texans were hospitalized on Monday, a third higher than last week.

Ohio Gov. Mike DeWine, a Republican, issued an order Tuesday requiring residents to wear masks in public in seven counties, including those that are home to Cincinnati and Cleveland.

Trump administration health officials announced Tuesday that they are moving medical support into three areas of "recent and intense" outbreaks in Texas, Louisiana and Florida. That includes Jacksonville, Fla., the site of the Republican National Convention, where Trump is expected to be formally nominated next month as the GOP candidate.

Trump's handling of the pandemic, which has been most extensive and deadliest in the United States, drew renewed criticism from presumptive Democratic presidential nominee Joe Biden on Tuesday. Biden issued a plan for how he would respond to such pandemics, creating a sharp contrast with the Trump administration's approach.

"Donald Trump needs to do his job," Biden wrote on Twitter on Tuesday.

Biden's plan calls for increasing federal stockpiles of medical supplies and requiring companies to develop strategies to address supply chain disruptions, among other measures, as a way to limit the nation's dependence on other countries in times of crisis.

The blueprint is meant to serve as a rebuttal to Trump's positioning himself as an "America first" president, according to a senior Biden campaign official who noted the president's tagline and was critical of his record. Biden's plan would initiate a 100-day review period upon taking office to "identify critical national security risks across America's international supply chains."

The United States has reported nearly 3 million confirmed virus cases to date, meaning nearly 1 in every 110 Americans has been found to have the virus, with large swaths of the country not having been tested.

At least 128,000 deaths have been linked to the virus nationwide, with the United States having more than twice as many reported deaths as any other country and the nation accounting for nearly a quarter of all virus-related deaths worldwide.

More than 890 U.S. deaths were reported Tuesday, the highest total in 12 days, amid signs the country's death rate might be creeping up after falling for the past three months.

Trump has repeatedly complained that not enough attention is being paid to the country's death rate.

"We have the lowest Mortality Rate in the World. The Fake News should be reporting these most important of facts, but they don't!" Trump tweeted.

Scientists say many countries have lower death rates than the United States.

The nation's top infectious-disease expert, Anthony Fauci, said Tuesday that although the fatality rate of the coronavirus has dropped, Americans should not be complacent.

"It's a false narrative to take comfort in a lower rate of death," Fauci, director of the National Institute of Allergy and Infectious Diseases, said during a Facebook Live news conference with Sen. Doug Jones, D-Ala. "There's so many other things that are very dangerous and bad about this virus."

The lower mortality rate is a result of two factors, he said. The country has gotten better at treating people, particularly through therapies that work in the advanced stages of the disease. And, Fauci said, the mean age of those getting infected has dropped by about 15 years.

Compared with the older population, young people generally face less-severe consequences from the virus, unless they have underlying medical complications, he said. Still, some young people have been hospitalized or have required intensive care, and there could be long-term health implications.

"The death rate is lower, I admit that, because people in general who are young are healthier," Fauci said. "But that doesn't mean that you could not get seriously ill."

In Brazil, home to the world's second-worst outbreak, President Bolsonaro became at least the third world leader to contract the virus. British Prime Minister Boris Johnson was treated in intensive care in April and has since recovered. Honduran President Juan Orlando Hernández, who was hospitalized last month, said last week that he was leaving the hospital and returning to work.

Bolsonaro, 65, has repeatedly played down the seriousness of the pandemic, even as Brazil has reported more than 1.6 million confirmed cases and 65,000 deaths. He has been a skeptic of the pandemic as he has pushed Brazilians to get back to work and saying that with his own "history as an athlete, if I were infected by the virus, I wouldn't need to worry."

He was tested after developing symptoms that included a fever.

Tensions about how to handle border-hopping during the outbreak also flared again this week.

New federal guidance that international students must take classes in person to legally stay in the United States this fall has left university officials scrambling to adapt while making students fearful of deportation. The guidance from the U.S. Immigration and Customs Enforcement agency said that foreign students won't be allowed to have visas for programs that are fully online during the fall semester, nor will they be allowed into the country. Though some universities, including Harvard, have pledged to create an on-campus experience for students - especially those in their first year - many have said classes will be online only even if students are on campus.

The White House, meanwhile, has been pushing for schools to open in the fall. Trump said he would pressure governors to open buildings because in-person education is essential for the well-being of students, parents, and the country. "We want to reopen the schools," Trump said. "We don't want people to make political statements or do it for political reasons. They think it's going to be good for them politically, so they keep schools closed. No way."

The Trump administration is also seeking to expand testing in hard-hit areas. The Department of Health and Human Services said that it is dispatching private contractors to three communities - Edinburg, Texas; Baton Rouge; and Jacksonville - to administer 5,000 free tests per day in coming weeks.

"The Trump administration is doubling down on support to areas hard hit by covid-19," the illness caused by the virus, said Brett Giroir, an HHS assistant secretary who is the administration's coordinator for diagnostic testing for the virus.

The Centers for Disease Control and Prevention also published a study on Tuesday that offered further evidence that the virus disproportionately affects workers of color. The study looked at workers in 329 U.S. meat and poultry facilities across 23 states and found that the majority of cases occurred among Hispanic employees (56 percent), followed by 19 percent in black employees, 13 percent in white employees and 12 percent in Asian employees.

The rates are disproportionate to employee demographics at the facilities. The workforce breakdown is 39 percent white, 30 percent Hispanic, 25 percent black and 6 percent Asian, the report said.

Meat and poultry plant workers are particularly vulnerable to the rapid spread of the virus because of the working and living conditions that are common in the industry: prolonged close contact among co-workers, eight- to 12-hour shifts, shared workspaces, group housing and shared transportation.