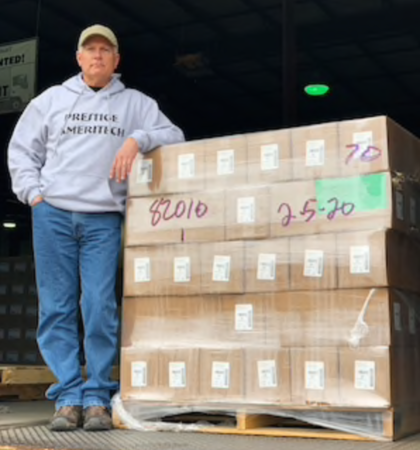 Health-care workers on the front lines of the coronavirus pandemic are encountering shortages of masks, gowns, face shields and gloves - a frustrating recurrence of a struggle that haunted the first months of the crisis.

Nurses say they are reusing N95 masks for days and even weeks at a time. Doctors say they can't reopen offices because they lack personal protective equipment. State officials say they have scoured U.S. and international suppliers for PPE and struggle to get orders filled. Experts worry the problem could worsen as coronavirus infections climb, straining medical systems.

"A lot people thought once the alarm was sounded back in March surely the federal government would fix this, but that hasn't happened," said Deborah Burger, a California nurse and president of National Nurses United, a union representing registered nurses. Like many health-care workers, Burger blamed the Trump administration for the lack of equipment, noting the administration has insisted the responsibility falls to state and local officials, with the federal government playing only a supporting role.

The specter of equipment shortages comes as other issues that plagued the country's early response to the pandemic return: surging cases, overwhelmed hospitals, lagging testing and contradictory public health messages. But the inability to secure PPE is especially frustrating, health-care workers say, because it is their main defense against catching the virus.

For weeks, nurses have posted online testimonials about a lack of PPE, with some given surgical masks instead of N95 masks because of shortages. In a video posted last week, a Florida nurse said she breaks the oath she took "to do no harm" every time she goes to work without protection and worries constantly she may be infecting her patients, co-workers and family.

In interviews, White House officials said concerns over PPE shortages are overblown. They said U.S. manufacturing and stockpiles of protective equipment have improved dramatically and are adequate in most states.

"I'm not going to tell you we're able to meet all demand, but there's significantly less unfulfilled orders today than in April," said Rear Adm. John Polowczyk, whom President Donald Trump put in charge of coronavirus-related supplies. "I have not found a hospital system that is in threat of running out. . . . I don't have the sense of there being severe shortages."

Polowczyk said the Trump administration has helped increase domestic manufacturing of PPE and that demand continues to outstrip supply because hospitals, states and the federal government are trying to stockpile supplies. He blamed some of the concern about shortages on outdated letters to Congress from March and April.

But the administration's reassurance contrasts with growing alarm from medical associations, governors, nursing homes and members of Congress - all of whom have pleaded for federal help within the past month.

Demand for protective equipment has soared, but unlike in March, when efforts focused on getting PPE for major hospitals - especially in New York, Detroit and Chicago - supplies now are desperately needed by primary care offices, nursing homes, prisons and psychiatric and disability facilities. As many states continue to reopen their economies, demand has also surged from the construction industry and other sectors. With soaring demand, prices have skyrocketed.

Some hospitals say much of the PPE they have acquired has been exorbitantly priced. At a legislative hearing, a hospital association executive detailed how one Maryland hospital that spent $600,000 on PPE last year expects to spend $10 million this year. The struggles have been especially acute for smaller and rural providers that can't compete with bigger health systems on price and large-scale orders, experts say.

In a letter last week, the American Medical Association told the Federal Emergency Management Agency that doctor's offices outside big systems - including those providing primary care, chemotherapy and minor surgeries - have struggled to reopen because they are unable to secure PPE. The association, which pleaded for transparency and a coordinated national strategy, said it is unclear "whether the central problem is in the availability of raw material, production backlogs, gaps in the distribution systems, or some combination of all three."

In a second letter, the medical association urged the White House to invoke the Defense Production Act to compel manufacturers to increase supplies of N95 masks and gowns.

In Washington state, Gov. Jay Inslee, a Democrat, said state officials have struggled to find domestic and international suppliers. In a letter to Trump last month, Inslee said he has tried to buy $400 million in equipment, but only 10 percent of orders have been filled.

"It is clear that the status quo is not working," Inslee said, pointing to an inadequate federal stockpile, reliance on foreign suppliers and limited domestic production. He described a counterproductive and "unnecessary, chaotic, 50-state scramble to secure badly needed PPE" and cited the continued lack of a coordinated federal response. "It is akin to fighting a war in which each state is responsible for procuring its own weapons and body armor."

As the virus has rampaged through America, it has pummeled the ranks of health-care workers, infecting at least 94,000 and killing at least 500, according to an incomplete count by the Centers for Disease Control and Prevention. The true number is believed to be much higher.

A study of U.S. and British medical workers found their risk of testing positive for the coronavirus was 12 times higher than the general public's. The researchers from Massachusetts General Hospital and King's College London found that workers with inadequate PPE access were at even higher risk.

"The limited availability of adequate PPE, such as masks, gowns and gloves, has raised concerns about whether our health care system is able to fully protect our health care workers," senior author Andrew Chan, chief of the Clinical and Translational Epidemiology Unit at Massachusetts General, said in a statement.

Last month, Sen. Maggie Hassan, D-N.H., successfully pressed FEMA to release an internal report that showed alarming shortages of medical gowns and no meaningful increase in their production since March, when nurses and doctors in New York resorted to wearing trash bags. The FEMA report states bluntly, "The demand for gowns outpaces current US manufacturing capabilities."

The report also suggests health-care workers will need to keep reusing N95 masks for months to come. And it notes there remain no domestic manufacturers of nitrile gloves, meaning hospitals must continue relying on foreign suppliers.

At a congressional hearing last week, House Democrats raised similar concerns and revealed their findings from an investigation into the Trump administration's handling of supply chain problems. Their report alleged failures to provide data and guidance needed to address shortages in manufacturing and distribution. The report found Trump's policy of shifting responsibility to state leaders resulted in a disastrous competition for resources.

In interviews with committee staff, large medical equipment companies cautioned that prices for raw materials have risen dramatically. One executive told congressional staff that "raw material for gowns is unavailable at any price, at least in the quantities we need to make gowns" and warned continuing to supply PPE under these conditions is "not sustainable."

In a 45-minute phone interview Tuesday with The Washington Post, Polowczyk, the administration's point person on coronavirus-related supplies, defended White House efforts. Its strategy of emphasizing local and state control, bolstered by federal support, is working, he said, with 60 to 70 percent of states having nearly a two-month PPE supply. He said the other states should be okay because they are requiring counties and hospitals to have a month's worth of supplies.

"I just talked to a hospital system in Houston, Texas, where you would read the mainstream news and think the world is ending and they're running out of stuff. But multiple hospitals across the region have millions of isolation gowns, masks and also hundreds of thousands of N95 masks," Polowczyk said.

Nurses at a hospital in Humble, Texas, went on strike Monday, protesting a lack of adequate PPE. Hospitals executives in Houston - where case numbers keep breaking records - have said they have enough PPE for now but expressed worries of running out if cases continue to spike.

Polowczyk said he briefs governors weekly and that FEMA has ensured equitable distribution of supplies. While he acknowledged continuing problems with unmet demand, he said those issues are decreasing.

And he said that since the start of the pandemic, the White House has invoked the Defense Production Act more than 20 times. Critics, however, have noted the Trump administration has routinely invoked the act hundreds of thousands of times for issues outside the pandemic and questioned the administration on its hesitancy to use it to address PPE problems.

Doctors throughout the nation created a volunteer organization in March called #GetUsPPE to marshal donations and make bulk purchases. In recent weeks, the number of PPE items requested has surged, said co-founder Megan Ranney, an emergency room doctor and researcher at Brown University. Some of that may reflect greater awareness of their group, Ranney and others said. But a drastic increase in calls for gowns and coveralls tracks with shortages documented by FEMA and industry leaders, and a spike in requests from Texas arrived as cases there surged.

"We thought we were creating this thing that would be around a few weeks, like a temporary fix to this problem others would solve once they saw just how bad it was," Ranney said. "Here we are months later and it's like nothing has changed."