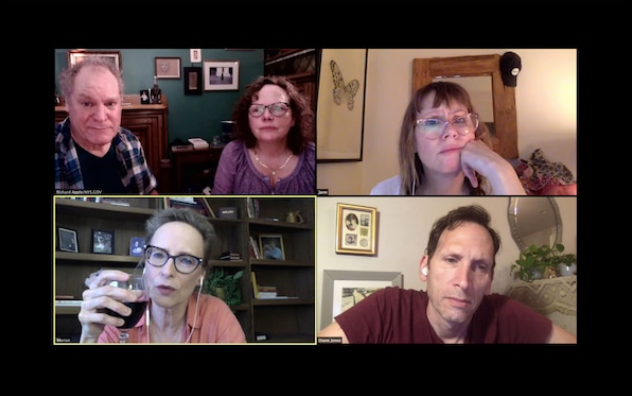 The question hangs in the virtual air of "And So We Come Forth," Richard Nelson's wistfully stirring new Apple Family play. "What have we done to ourselves?" asks Jane Apple, as her siblings and boyfriend-partner, Tim, peer out of their Zoom cubes. In this time of existential threat and social upheaval, they're as ill-equipped to come up with an answer as she is.

This second Zoom play - and sixth in the Apple Family series by its author-director - finds the Apples in early July 2020, in fragile states. The isolation created by the pandemic and introspection prompted by the Black Lives Matter movement have rattled Jane (Sally Murphy) and sisters Marian (Laila Robins) and Barbara (Maryann Plunkett) and brother Richard (Jay O. Sanders). A certain vague dread now dominates their dinnertime musings-by-laptop in their Rhinebeck, N.Y., homes. Despite the mutual family support, everything feels as if it is unraveling.

"I have never felt more lost," Marian reads from a friend's email to the others, who also include Tim (Stephen Kunken), logging on from Brooklyn, where he is visiting his daughter. All thinking people like the Apples are at this moment adrift, it seems, even as they are anchored in place. This fugue state is a function of the eddy of anxieties and terrors and injustices aswirl in our consciousness day after day now - and all with an election on the horizon whose outcome feels wrenchingly pivotal to the country's survival.

The hour-long "And So We Come Forth," available free this month and next at theapplefamilyplays.com, is an excellent example of the nourishment cooked up by theater minds while theater spaces remain shuttered. The first four Apple plays premiered at the Public Theater, and, unlike some stories, moving theirs online proves to be seamless. The characters, professionals with complicated histories, expounding on politics and art, have always been there for one another; separating them via digital quarantine in no way loosens that bond. Watching them all in close-up, you get a potent sense of the ineluctable effect they have on one another.

The impact, and the perspective, are strikingly different with another production being streamed free: the National Theatre in London, offering on NT Live a film of its 2016 revival of Lorraine Hansberry's "Les Blancs." The author of "A Raisin in the Sun" did not live to see her epic portrait of the ravages of white hegemony in an African colony; it ran for a month on Broadway in 1970 - five years after her death at age 34 - with a cast headed by James Earl Jones.

Hansberry and her slightly older contemporary, Alice Childress, are getting a bit more of the attention equal to their achievements: Childress's 1955 "Trouble in Mind," about the casual racism backstage in a cast of white and black actors, is slated for a long overdue Broadway debut, at Roundabout Theatre Company, after theaters reopen. "Les Blancs" was on the agenda of Shakespeare Theatre Company for the 2020-2021 season before covid-19 made a shambles of theater calendars. Its director was to be Yael Farber, who directed "Mies Julie" and the world premiere of "Salome" for the Washington company.

Farber also staged the National Theatre's version of "Les Blancs," creating a galvanizing platform for dissecting white paternalism in the fade-out of 20th-century colonialism. The gallery of African, American and European characters, converging at a missionary hospital in the outback of the unnamed African colony, gives Hansberry a broad canvas to lay out a multiplicity of viewpoints. Central among them: a black African (Danny Sapani) returning home from Europe, where he has a white wife and mixed-race child, and a white journalist (Elliot Cowan) seeking a story about the reality on the ground at this remote outpost.

"Les Blancs" somewhat languidly embraces the task of balancing a spectrum of outlooks, from a virulently racist British army major (Clive Francis) to a conflicted young African (Tunji Kasim) being recruited for an uprising. (On hand, too, is the splendid Siân Phillips, as the Norwegian wife of the mission patriarch.) But once the volatile dynamics are set in motion, in this adaptation by Robert Nemiroff, the clarity of Hansberry's perceptions take passionate hold. The degree to which the events correspond to racial conflicts occurring in this country now will deepen your appreciation of this dramatist's visionary art.

"Les Blancs" is as lavish a spectacle as "And So We Come Forth" is devoid of it. I've had my quarrels with plays on film. But the manner in which Farber's visual inspirations are ably recorded - depicting some hallucinogenic sequences of chanting African women and a haunting solitary figure (Sheila Atim) betokening silent suffering - redeems the static results of other such endeavors.

Nelson's efforts, though, succeed by eschewing theatricality, perhaps because the difficult moment in which his play is set requires no imaginative filter. At the end of "And So We Come Forth," the great Plunkett declares - and, heck, her castmates are all great - that she has never felt so old. We instantly understand the subtext, without any directorial intervention at all.