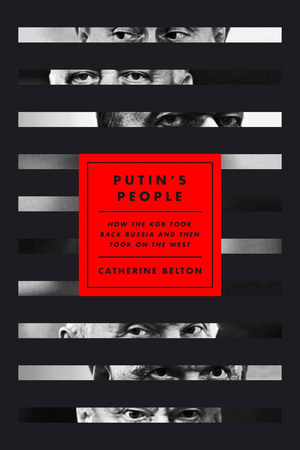 By Special To The Washington Post · Anders Åslund · ENTERTAINMENT, BOOKWORLD

In her deeply researched new book, Catherine Belton tells a dark tale of Vladimir Putin's rise to power and his 20 years as leader of Russia. Reading "Putin's People: How the KGB Took Back Russia and Then Took On the West," we are reminded of how far we've come from the romantic days of the late 1980s and early 1990s, when Western writers depicted a Russia full of hope and hints of freedom. We've also progressed far from the exhilarating but scary portrayals of the immensely rich oligarchs in the late 1990s who flocked around Boris Yeltsin and his family.

In Belton's view, freedom, private enterprise and liberalism simply don't exist in Russia. To her, Putin's Russia is all gloom. She details how Putin's nefarious efforts took shape with others in St. Petersburg and its seaport, an area that "became ground zero for an alliance between the KGB and organized crime that was to expand its influence across Russia, and later into Western markets and institutions." She delves into territory explored by Russian historians Yuri Felshtinsky and Vladimir Pribylovsky in "The Corporation: Russia and the KGB in the Age of President Putin"; by opposition politicians Boris Nemtsov and Vladimir Milov in their white paper, "Putin and Gazprom"; and by Karen Dawisha in "Putin's Kleptocracy: Who Owns Russia?" But Belton, a former Moscow correspondent for the Financial Times, digs deeper.

Hers is a story about Putin, his KGB colleagues, businessmen and mobsters pieced together though interviews with many relevant players. Belton's access to prominent personalities is impressive, perhaps unmatched, though her interlocutors also steer the direction of her story.

The main takeaway is that the KGB and organized crime have operated symbiotically for a long time and that their overt Russian nationalism is nothing but a veneer. Belton characterizes the ambitions of Putin's people in her description of Nikolai Patrushev, the former head of the Federal Security Service (FSB) and now secretary of the powerful Security Council. "A hard-drinking KGB man," she writes, "he combined a strong capitalist ethic of amassing wealth with an expansive vision for the restoration of Russian empire." Thus, Putin's men (they are all men, of nearly the same age, mostly from St. Petersburg) have created a potent mix of the KGB, larceny and a wistfulness for Russian imperialism.

Belton appropriately compares Putin's regime to that of Czar Nicholas I, who reigned from 1825 to 1855. Putin's "philosophy was a direct copy of the state doctrine of 'Orthodoxy, Autocracy and Nationality' of Nicholas I, one of the most reactionary tsars, known for his brutal suppression of one of Russia's first democratic uprisings," Belton writes. "Putin's KGB men were seeking to recycle his ideology to define their rule and justify their clampdown on any opposition."

When Putin became president in 2000, he already controlled the FSB and soon Russia's legislative body, the Duma. During his first term (2000-2004), he consolidated his power: His KGB men served as a counterweight to Yeltsin's oligarchs, and he seized control of television, the regional governors and the judiciary. He ordered the oligarchs to keep out of politics, but their power remained great. Putin ended the Yeltsin regime by taking down the biggest of all the oligarchs, Mikhail Khodorkovsky, by confiscating the Yukos Oil Company.

That story is well-known, but Belton's account is probably the best. She spoke extensively with the main Yukos owners, including Khodorkovsky and Leonid Nevzlin. In her view Khodorkovsky had fallen victim to his own hubris, believing he could criticize corruption within Putin's circle. The result was that Putin took him down. But Khodorkovsky's plight reflected something much larger. Putin's grip was becoming a stranglehold. "The country was turning back to the times of the gulag," Belton writes. "The Kremlin had taken control of the legal system. The power of the secret services was being cemented. Khodorkovsky, the country's onetime richest man, was languishing in a prison camp in Krasnokamensk."

In October 2002, about 40 armed Chechen fighters seized the Dubrovka Theater in a Moscow suburb and took about 900 people hostage. The siege lasted three days, until Russian security forces stormed the theater after gassing both the fighters and the hostages. More than 100 hostages died. The traditional story is that the heavy-handed security services could not have cared less about the loss of the civilians.

But Belton offers a novel interpretation of what happened at the theater. On the basis of credible inside information, she claims that this purported Chechen terrorist attack was a Putin charade that went horribly wrong. Based on her conversation with a source familiar with Kremlin discussions about the matter, Belton argues that the attack was planned by FSB chief Patrushev as a way to "cement Putin as president. It was intended as no more than a fake exercise that would boost Putin's authority when he successfully brought it to an end, and increase support for the war in Chechnya, which was beginning to flag." Patrushev assured Putin that the terrorists-for-hire did not have real bombs and that in the end, Belton writes, "Putin would emerge as a hero, as the one world leader who'd ended a hostage crisis without any civilian deaths - and then he could tighten control in Chechnya."

But it all started falling apart on the first day of the siege, when a civilian entered the theater and was shot to death by one of the Chechens. Belton's source told her: "Everything spiralled out of control. . . . By the time the security forces prepared to storm the building, the hostage-taking was being treated as if it were a real act of terror."

In Belton's telling, Putin uses an "obschak" for both his private business dealings and his personal life. "In Russian criminal parlance," Belton writes, an obschak is "a common cash pot or slush fund for a criminal gang." The Panama Papers - millions of documents on offshore entities, leaked in 2016 - revealed that much of the obschak was held offshore. Belton devotes two chapters to the obschak, focusing on Gazprom's devious gas trade with Ukraine and the government larceny revealed in the Panama Papers. But she doesn't take her analysis much beyond the role of defector Sergei Kolesnikov, a Russian businessman and whistleblower who charged Putin's closest business friends and cronies with vast corruption before he fled Russia in 2010.

Belton builds a strong case against Putin's corruption and the bald hypocrisy of his propaganda. She quotes Putin's former banker, Sergei Pugachev, as saying, "They're stealing from all sides and then they come out and speak about how Putin is fighting against corruption." But Belton is unable to shed any new light on Putin's personal finances. Pugachev is her dominant source, but he "had gradually been sidelined," Belton writes, after Putin's attack on Khodorkovsky. Pugachev's own downfall came because he was not sufficiently submissive to Putin; ultimately he was deprived of most of his enterprises and had to flee to the West.

Belton also probes the many connections between Russian organized crime in New York and Donald Trump. But Craig Unger has already pursued this trail in greater detail in his excellent book "House of Trump, House of Putin: The Untold Story of Donald Trump and the Russian Mafia."

Belton's book is an outstanding account of Putin's Russia, and elegantly told. At the heart of her story is the long battle between the KGB and the country's oligarchs. From 1994 to 2000, when Putin came to power, Russia was an oligarchy. Today, the tables have turned: Russia has no oligarchs, only wealthy servants of Putin and his FSB. As a former senior military intelligence officer told Belton, the KGB once had to serve the oligarchy. "Now they are having their revenge."