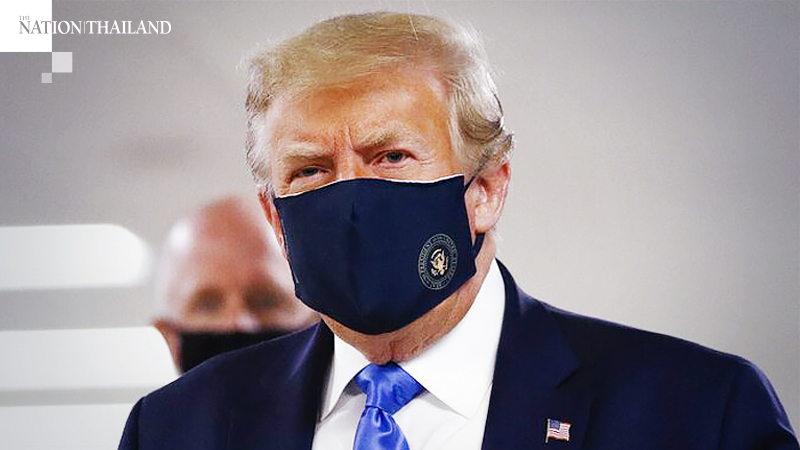 WASHINGTON - President Donald Trump wore a mask in public for the first time Saturday, more than three months after public health officials from his own administration recommended that all Americans cover their face when social distancing was not possible.

Trump's decision to don a mask during a trip to Walter Reed National Military Medical Center followed several months of controversy over his reluctance to abide by public health guidelines even as novel coronavirus cases surged nationwide. Before wearing the navy-colored mask Saturday, Trump had disparaged his Democratic rival, Joe Biden, for wearing a mask and publicly downplayed the importance of face coverings.

While the president said in recent interviews that he had no problem with masks, Saturday's public appearance was the first tangible example of him following through on that with action.

"I've never been against masks, but I do believe they have a time and a place," Trump said Saturday at the White House before leaving for Walter Reed.

While visiting wounded veterans and health-care workers at the facility, Trump wore a dark mask that covered most of his face. It featured the presidential seal.

For months, health officials and several Republican lawmakers have urged Trump to model good safety practices by wearing a mask in public, even though he is in an uncommon situation because he is regularly tested for the coronavirus. Trump resisted, and the concept of mask-wearing became part of the country's partisan political battles as the coronavirus spread rapidly in America and other countries gained control of the pandemic.

"Unfortunately this simple lifesaving practice has become part of a political debate that says: If you're for Trump, you don't wear a mask. If you're against Trump, you do," Sen. Lamar Alexander, R-Tenn., said last month during a Senate hearing. "That is why I have suggested the president should occasionally wear a mask even though there are not many occasions when it is necessary for him to do so. The president has millions of admirers. They would follow his lead."

Trump instead chose to set a different example, holding several mass gatherings in recent weeks in which most participants did not wear masks. Trump defied local ordinances and guidelines in Michigan, Oklahoma, Florida, Arizona and elsewhere as he traveled the country maskless.

Trump has attacked Biden on Twitter for wearing a mask and told Fox News on Thursday that Biden's mask was the "the largest mask I think I have ever seen. It covers up a big proportion of his face."

Biden's campaign criticized Trump on Saturday for waiting so long to wear a mask publicly.

"Donald Trump spent months ignoring the advice of medical experts and politicizing wearing a mask, one of the most important things we can do to prevent the spread of the virus," said Biden campaign spokesman Andrew Bates.

"Rather than taking responsibility and leading, he wasted four months that Americans have been making sacrifices by stoking divisions and actively discouraging people from taking a very basic step to protect each other," Bates said. "By contrast, Joe Biden has led by example from the start and as president will make decisions informed by science to protect the American people and defeat the virus."

As health officials in the Trump administration have tried to persuade Americans to wear masks to slow the spread of the coronavirus, Trump has repeatedly focused on the aesthetics of face coverings and social distancing - adding to the politicization of the issue.

After he toured a factory in Michigan in May, Trump told reporters that he did not wear a mask in front of cameras because he "didn't want to give the press the pleasure of seeing" him with his face covered.

By Saturday, with coronavirus cases in the United States hitting records on a daily basis, Trump was willing to wear the mask in front of cameras - strolling through Walter Reed surrounded by several men who were also wearing masks.

Trump said it made sense for him to wear the mask because he was in a hospital and "in that particular setting where you're talking to a lot of soldiers and people that in some cases just got off the operating tables."

Walter Reed's website includes guidance that says visitors "are expected to wear a cloth face covering over their nose and mouth upon entering and while moving about the facility . . . when not able to maintain 6 feet of social distancing."

In explaining his about-face on face coverings this month, Trump still focused on superficial rationale, not the public health benefits.

"Actually, I had a mask on. I sort of liked the way I looked, okay? I thought it was okay," Trump told Fox Business Network on July 1. "It was a dark, black mask, and I thought it looked okay. Looked like the Lone Ranger. But, no, I have no problem with that. I think - and if people feel good about it, they should do it."

Several Trump campaign aides and White House officials posted images of Trump wearing his mask on Saturday, with most commenting on how he looked rather than on the public health issue.