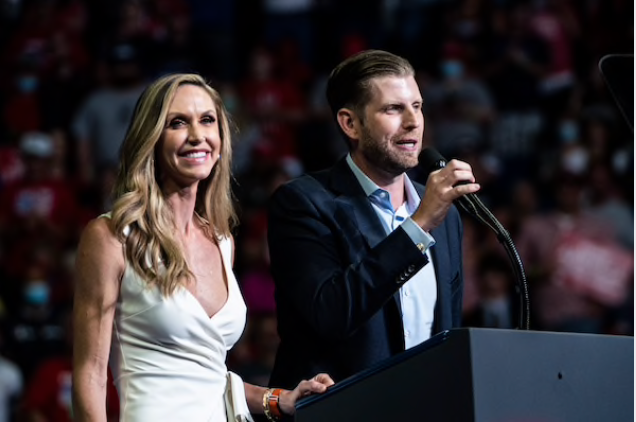 The Chiara Boni La Petite Robe brand of womenswear might best be described as efficiently feminine and abundantly wearable, which is a rare combination in fashion. The dresses, which travel with ease, have been embraced by news anchors and celebrities, but they are practically a uniform among Trump boosters, who tend to wear them like telegenic armor, with significant heels and impeccable grooming.

Instead of disavowing this Trumpian connection - or carefully ignoring it - the brand has embraced it with social media glee. This, too, is virtually unheard of in fashion. It might even be considered reckless in these dire and politicized times. More than half of the country disapproves of the president's handling of a job that is now defined by the pandemic, the tanking economy and calls for racial justice.

To be clear, the veteran designer who is the namesake of Chiara Boni is not reveling in the brand's connection to Trump world. Boni, who is Italian and based in Milan, is focused on her clothes' fit, her signature jersey fabric and the issue of sustainability. The brand's official Instagram account is dominated by runway images and highlights of the company's covid-19 response.

"I definitely think fashion should be a safe space - not a place for politics," says customer Niki Levy, in an email.

The Trump association is highlighted by Anthony Vecchione, who owns the New York sales showroom of Chiara Boni USA. He is friendly with many of the high-profile women who inhabit Trump-ville - Jeanine Pirro, Lara Trump, Kimberly Guilfoyle - and regularly posts pictures of himself alongside them and dutifully tags the fashion brand for emphasis.

Vecchione's willingness to do this is notable because the fashion industry has had an antagonistic relationship with this White House since before Trump's inauguration. Soon after the election, a litany of designers announced they would not dress the first lady. Even now, when she purchases ensembles at retail, companies have been reluctant to take credit. (The most vociferous exception has been Dolce & Gabbana.) When presidential counselor Kellyanne Conway wore Gucci to the inauguration, the brand went out of its way to make clear that her decision to do so was beyond its control. A whole movement was launched encouraging consumers to boycott brands that supported the new administration, and that animosity has only grown during this election cycle.

"I am very much not influenced by who is wearing what. It's more about what I like and what best suits me," Chiara Boni customer Veronica Bulgari - of the jewelry family - writes in an email. But it's "certainly not a plus to know that Trump campaign members are wearing them!!!"

Waters that were already treacherous have become practically lethal. Regardless, Vecchione dives in.

"I'll take any woman who pays retail," he says. "We dress the right, the left and everyone in the middle."

Chiara Boni La Petite Robe was founded in 2007 and quickly became profitable, thanks in large measure to Vecchione and its popularity in the United States.

The dresses come in eye-catching jewel tones and are often embellished with a ruffle or something akin to a half peplum. They're body-conscious garments that keep everything precisely where a woman would like everything to be.

They sometimes have a well-placed slash at the neckline or at the shoulders to reveal a flash of skin. They aren't overtly sexy, but they are knowingly so. They are power-dresses for the male gaze.

The collection is regularly shown on the runway in New York, but viewers of television news will have seen these dresses in the wild, as they are in regular rotation behind the anchor desks at Fox News, as well as the other networks. Vecchione once appeared on "Justice with Judge Jeanine" as a first lady fashion expert and tsk-tsked his industry for not lauding Melania Trump's style during her 2017 visit to Saudi Arabia and Israel.

"What they should be doing right now is praising our first lady for how beautiful and how chic she is representing our country," Vecchione said during his TV appearance. (Melania Trump has not worn Chiara Boni in the White House.) "The woman looks statuesque. She floats. She's beautiful."

The collection has also turned up on the red carpet on women such as Niecy Nash, and on the cover of O magazine, worn by its regular cover model Oprah Winfrey.

The O magazine cover is a testament to the tenacity of Vecchione, who set out to meet the media mogul by stalking her best friend, "CBS This Morning" anchor Gayle King, who is also editor at large at the glossy. He knew that King had purchased a Chiara Boni dress in the past, and so "I went to Hearst publications and sat in the coffee area for three hours until I ran into Gayle King." She was his introduction to the magazine's creative director who oversees Winfrey's editorial shoots.

In explaining why he was not thrown out of the building for loitering, Vecchione says, "I have a charming manner to me."

He grew up in New Jersey and now lives in New Rochelle, a small city about 20 miles north of Manhattan, with his husband of 26 years, who works in real estate. "My husband and I are blessed to be very social," he says. "We are the most invited gay couple around."

When a phone interview interrupts Vecchione during his at-home manicure, he is both gracious and garrulous. At 54, he has already worked in the business more than 30 years, beginning when he was selling textiles to some of the founding fathers of modern Seventh Avenue, such as Bill Blass and Oscar de la Renta, whose lives were interwoven with their clients'.

One of the things he learned from those years was that business is personal; friendships beget profits.

He is not swayed by the usual bright shiny objects that make the industry swoon. He brags that Birmingham is one of his biggest markets. He is happy to dole out fashion-show tickets to non-famous customers who may have made only modest purchases, if it means generating goodwill. He donated a dress to a Museum of the Bible fashion show last year. There he is smiling on Facebook with a founder of the Trumpettes USA, Toni Holt Kramer.

"I became friends with our clients. You have to become part of the customers' life. You become part of their world," Vecchione says. "Everything we did, we did with a charitable cause. You can buy a page in Vogue for $100,000, but I started to get involved in diabetes (charities) ... in every charity out there. You want to take money from people, you have to give."

Vecchione became acquainted with Pirro, a friend of Trump, thanks to the geography of Westchester County where he lives and where Pirro was once district attorney. But he says they really bonded when, during a fashion show at Neiman Marcus in White Plains, Pirro raved to the assembled guests about the brand. When asked to chat about her friendship with Vecchione, her representative at Fox News wrote, "We'll pass."

He has known Lara Trump since before she was married to the president's son Eric, he says: "A whole clique of us used to hang out." Lara Trump did not respond to requests to discuss their relationship.

But Vecchione's Instagram account bears witness to his affection for his pals and their style. There is a picture of Lara Trump in a clingy white dress standing alongside campaign fundraiser Guilfoyle (girlfriend of Donald Trump Jr.) in a cobalt blue one. The two are smiling from the president's Tulsa rally last month. Vecchione is pictured in Trump Tower with Pirro, who's wearing pearl-studded Chiara Boni pants; he's beaming with Lara at a birthday celebration for Eric. He is at Mar-a-Lago; he's at the White House in Melania's forest of red Christmas trees.

And he's posing with press secretary Kayleigh McEnany, who's dressed in festive red.

"She's chic and stylish," Vecchione says of McEnany. "She packages herself very well."

In the past, fashion has been a cultural data point that puts an indelible stamp on an era: the pillbox hats, the Kenneth Jay Lane pearls, the power sheaths. But today, fashion has become just another industry in economic crisis, another nesting place of inequality, a faint source of wistful distraction - and a vague memory of joy.

Vecchione keeps faith that friendship, politics and fashion can be mutually beneficial and yet, separate. That belief is by no means a reflection of the times. And its singularity is an indictment of them.