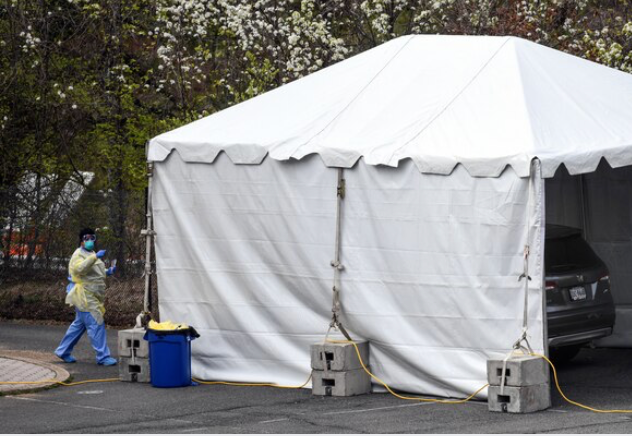 Major school districts are bucking federal pressure to say they won't reopen classrooms in the fall. Infections have been reaching record heights in the South, West and Midwest. More than 20 states are reporting seven-day averages in coronavirus-related deaths higher than at the end of June, underscoring the turnaround since May and June when deaths declined nationally - a development President Donald Trump had touted as a sign of progress.

Here are some other significant developments:

The Trump administration is trying to block billions of dollars for states to conduct testing and contact tracing in an upcoming coronavirus relief bill, people involved in the talks said Saturday. The administration is also trying to block billions that GOP senators want to allocate for the Centers for Disease Control and Prevention, the people said.

A study from South Korea could bolster those who argue reopening classrooms in much of the United States is too risky, suggesting that, while children under 10 years old are less likely to spread the coronavirus, young people between 10 and 19 years old will spread it similarly to adults.

Georgia's presentation of its coronavirus data is once again under scrutiny, with a viral tweet pointing out how the color-coding of a government map has evolved. At the beginning of the month, for instance, a county needed at least 5,959 coronavirus cases to be colored red in the state's map of the outbreak. Now, a county needs at least 9,597 - with the result that no other county has newly joined the four that have been colored red since July 1, even as the state's cases have jumped by more than 37 percent in the intervening time.

Health authorities are seeking to conduct testing faster while conserving resources. The Food and Drug Administration on Saturday reissued an emergency use authorization to Quest Diagnostics for a coronavirus test to be used in pool testing, which involves combining samples from several people and testing them all at once.

Arizona on Saturday reported a single-day high in new deaths, another sign that the surge in fatalities health officials had warned about is underway. And North Carolina, Georgia, Kentucky, Wisconsin and Missouri announced record-high new cases. The country set another record Friday for daily coronavirus infections, with states reporting a combined 76,403 new confirmed cases - more than double the amount the country was reporting daily during the initial surge of cases in the spring.

Globally, coronavirus-related deaths are nearing 600,000, according to tracking by Johns Hopkins University. Upward of 137,000 of those deaths were reported in the United States, where total known infections have ballooned to close to 3.7 million, based on data tracked by The Washington Post. More than 394,000 new cases and 4,300 deaths had been added in the U.S. over seven days.

Former Food and Drug Administration commissioner Scott Gottlieb warned heading into the weekend that hospitalizations could surpass a nationwide peak of nearly 60,000 in the coming days and said the country was on track to see several more weeks of continued spread. California, Montana, Puerto Rico and Texas on Saturday broke their records for covid-19 hospitalizations.

"We're taking a lot of infection into the fall, and once this collides with flu season the trajectory is going to be up," Gottlieb told CNBC.

The new wave of infections is once again straining resources at hospitals and leading to testing backlogs, with one lab in Arizona on Saturday reporting more than 60,000 tests pending. In South Carolina, lawmakers have requested military installations to help speed testing and reporting of the results: "This is an all-hands-on-deck time for us," state senator Tom Davis, a Republican, tweeted.

The FDA has reissued emergency use authorization for a coronavirus test to be used in pool testing as part of the ongoing effort to save precious resources.

Pool testing involves combining samples from several people and testing them all at once. If the batch comes out positive, then the patients would be retested individually. But if the batch is negative, everyone is cleared.

It's "an important step forward," said FDA Commissioner Stephen Hahn in a statement.

However, the virus has continued to disrupt nearly every aspect of daily life.

With the start of classes looming, some states such as Iowa, Florida and South Carolina have told schools to reopen. But others have backed off hopes of getting children back in the classroom, even as top federal health officials frame a widespread return to school as a boon to public health.

California has ordered most of its schools to conduct remote instruction in the new academic year unless counties can meet strict benchmarks for reducing community transmission. Under the mandate from Democratic Gov. Gavin Newsom schools must stay off the state's "watch list" for virus outbreaks for at least two weeks before they can resume classroom instruction.

Texas also pushed back start dates for in-person learning, allowing school districts more flexibility in when they decide to return after facing pushback for what many educators, parents and school officials said was a risky deadline for getting back to normal. And in Chicago, the country's third-largest public school district, officials announced this week they would pursue a "hybrid" model involving a mix of at-home and in-person instruction.

As fear of the virus wins out, a fast retreat from in-person learning

The South Korean study suggesting young people between 10 and 19 years old spread covid-19 much like adults comes days after CDC Director Robert Redfield said that there is not "much evidence" of children driving transmission, though he allowed that the risks could become clearer as children head back to school. The Trump administration has generally pointed to foreign countries' experiences reopening their schools as evidence that the United States can move ahead safely.

The pandemic also remains a persistent source of uncertainty in the sports world. The latest disruption hit summer baseball, as the Toronto Blue Jays said Saturday they are "in the process of finalizing the best home location for the remainder of the 2020 season" after the Canadian government barred the team from playing home games at their ballpark in Toronto. Officials said covid-19 was to blame.

"Based on the best-available public health advice, we have concluded the cross-border travel required for MLB regular season play would not adequately protect Canadians' health and safety," said Marco Mendicino, minister of immigration, refugees and citizenship.

Responses to the U.S.'s rise in infections have been inconsistent at the state and local level, creating a nationwide patchwork of public health measures and reopening plans. Former FDA head Gottlieb warned on CNBC on Friday that lack of policy action at the state level left it up to the "collective action of individuals" to protect themselves and their communities.

In hard-hit Texas, for example, it's been Houston Democratic Mayor Sylvester Turner challenging a planned in-person Republican Party of Texas convention that he argues poses too great a health risk with infections in the area spiraling out of control. A federal appeals court just blocked a lower-court ruling that would have allowed the Texas GOP to proceed with the gathering in downtown Houston.

"In the middle of a pandemic, the doors remain locked," Sylvester said of the appeals court's decision.

More than half of all states have instituted some form of statewide mask requirements, but governors have faced resistance. In Arkansas, some local law enforcement officials were refusing to enforce the mask mandate Republican Gov. Asa Hutchinson issued this week. Texas Republican Gov. Greg Abbott has experienced similar pushback from sheriffs and county officials.

Other governors have moved to strike down local mask ordinances, including Georgia's Brian Kemp, a Republican, who this week sued to stop Atlanta from enforcing the mayor's mandate for face coverings in public - even as the state's coronavirus numbers soar.

Georgia on Saturday reported a record high of nearly 4,700 new coronavirus cases, bringing its total cases to nearly 140,000, while 36 new deaths were reported. Average daily deaths have risen 150 percent compared with a week ago.

Georgia along with Florida, Texas, California and Arizona have led the country in new cases over the past seven days. Florida alone added more than 80,000 infections.