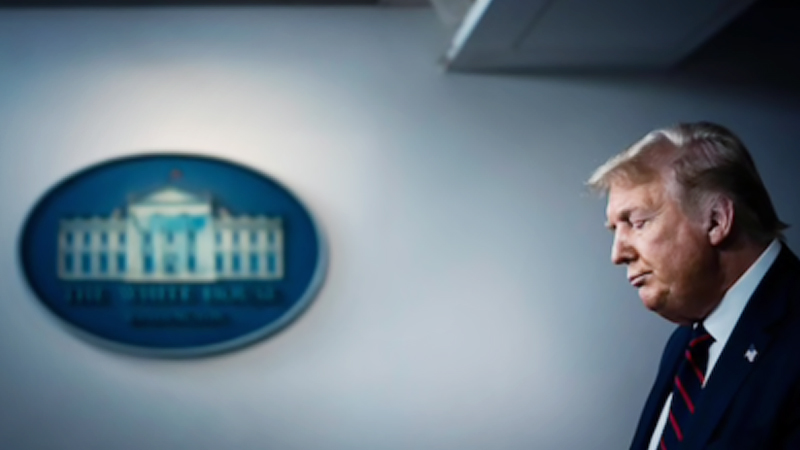 WASHINGTON - President Donald Trump walked to the lectern in the White House briefing room alone Tuesday, attempting to single-handedly hit the reset button on the public blame he is facing for not controlling the novel coronavirus pandemic.

Three months after he abandoned the daily virus briefings and attempted to turn the country's attention to what he described as the "great American comeback," Trump's low-key reappearance before reporters seemed to be a tacit admission that his previous strategy had not worked.

Six months after the first coronavirus case was confirmed in the United States - and with almost 4 million confirmed infections - Trump's attempt to re-engage with the crisis and embrace public health guidelines marked a notable departure from his recent approach to the pandemic.

"We are in the process of developing a strategy that's going to be very, very powerful," Trump said Tuesday, reading from prepared remarks that did not include details of what the strategy would entail.

While Trump continued to showcase his trademark boosterism with repeated praise of his administration, he also appeared to acknowledge that the virus he once said would soon disappear continues to pose a serious threat to the country, as well as to his reelection chances.

"It will probably, unfortunately, get worse before it gets better," he said during the 30-minute briefing in which he spoke in subdued tones. "Something I don't like saying about things, but that's the way it is."

That somber approach harked back to late March, when Trump warned of a "great national trial unlike any it has ever faced before" and predicted a "very painful two weeks" for the country.

That soberness did not last long; Trump spent much of April and May attacking governors who did not reopen their economies and resisting calls for the federal government to play a more central role in managing the crisis.

Public health experts blame much of the country's current predicament on that lack of leadership in those months - specifically pointing to Trump's unwillingness to push face coverings and social distancing as he traveled the country holding rallies and mocking people who wore masks. Trump's approval among the general public has also plummeted in recent months, with Americans giving him low marks for his leadership in crisis.

On the same day that his Democratic rival Joe Biden slammed him by saying "he's quit on this country," Trump attempted to use the revived daily briefing to prove otherwise.

Trump used part of his time in the briefing room to push a public health message that many lawmakers and medical experts have been requesting for months. He praised health-care workers for saving lives, largely avoided attacks on Democrats, and urged Americans to wear masks and stay away from crowded bars.

While he avoided some of the gaffes from his previous briefings and spent less time airing personal grievances, Trump still used the televised platform to break away from White House talking points and stir controversy. He contradicted press secretary Kayleigh McEnany's claims that he gets tested multiple times a day for the virus, and he sent well wishes to a woman who has been accused of grooming Jeffrey Epstein's underage victims and recruiting them to be sexually abused over several years.

"I just wish her well," Trump said when asked about Ghislaine Maxwell, Epstein's longtime companion who prosecutors say was an accomplice in his predation.

Trump's decision to appear at the briefing without members of the coronavirus task force was itself a matter of controversy in the hours before the event. Fearing that the president might become distracted and unfocused without public health officials in the room, several Republicans - and some White House officials - have called for the briefings to feature less Trump and more doctors.

But several top health officials in the administration did not know as of Tuesday morning whether they would be participating in the briefing alongside the president.

Appearing Tuesday on CBS News's "This Morning," U.S. Surgeon General Jerome Adams did not directly answer a question about whether high-profile members of the coronavirus task force would appear.

Asked by co-host Gayle King whether he, White House coronavirus response coordinator Deborah Birx or National Institute of Allergy and Infectious Diseases Director Anthony Fauci would be in attendance, Adams said: "They're still figuring that out."

Shortly before the briefing, Fauci told CNN that he had not been invited.

During the briefings Trump headlined in March and April, the president regularly undercut or muddled the messaging from public health officials. Trump, who rarely attended the coronavirus task force meetings, would often show up for the televised briefings with a different set of talking points.

The president regularly pitched the anti-malarial drug hydroxychloroquine as a "game changer" even as Fauci and others cautioned that it was untested and might not serve as an effective treatment. The Food and Drug Administration has since pulled its emergency use authorization for the drug after some studies showed that it could lead to a higher risk of death.

Trump also used previous briefings to contradict health experts on face coverings, telling reporters in April that he did not plan to use one. Several administration officials, including Fauci, Birx and Adams, have pleaded with Americans to use masks when in public - a message ensnared in partisan politics as Trump has vacillated on whether face coverings are a vital public health measure or a political statement.

The president appeared to reverse course on his mask skepticism on Monday, tweeting a picture of himself wearing a mask and writing that "many people say that it is Patriotic" to use a face covering when social distancing is not possible.

Given Trump's long history of criticizing mask use - he told The Wall Street Journal in June that some Americans wore masks as a protest of him personally - some medical experts said they wished the president would model good public health by walking into the briefing room with his face covered.

"I genuinely hope the President wears a mask to the press briefing as a signal to the several million people watching on TV that wearing a mask is simple and important," tweeted Rob Davidson, an emergency physician and executive director of the Committee to Protect Medicare, a national network of doctors that has lobbied against Trump. "At a minimum I hope he encourages all Americans to #maskup. A national mandate would be better."

Trump did not wear a mask to the briefing, but he pulled one out of his pocket and - in a rare departure - did not equivocate as he called on Americans to use them.

"We're asking everybody that when you are not able to socially distance, wear a mask, get a mask," Trump said. "Whether you like the mask or not, they have an impact."

Trump has long viewed the briefings as an opportunity to tout his handling of the pandemic and put a positive spin on the virus's devastating toll. Even as daily deaths were spiking in March and April, Trump told reporters that his actions had actually saved millions of lives. He repeated the claim Tuesday.

Trump favorably compared the United States to other countries during the briefing, saying "we've done much better than most."

In reality, the United States has performed far worse than most of the industrialized world in containing the spread of the virus. Cases in the United States have continued to spike in recent weeks, reaching records even as countries in Europe and elsewhere began to bring their outbreaks under control.

While Americans make up less than 5% of the global population, the United States accounts for almost a quarter of all deaths from the coronavirus.

Before the news conference, several previous White House press secretaries gave Trump public advice about how he should approach the briefing room.

Trump "should come out and present the update on what the government is doing in terms of fighting #COVID19 and getting economy open then walk off and allow other officials to provide additional updates and answer questions," Sean Spicer, the first press secretary in the Trump White House, wrote Tuesday on Twitter.

He quoted a post from Ari Fleischer, press secretary in the George W. Bush White House, which called the briefings a "mistake" before going on to offer guidance.

"Be specific about what the Fed government is doing" and "Get out of the room within 30 minutes," he wrote.

Sarah Sanders, who succeeded Spicer, told Fox News on Monday that Trump should remind people that he is doing everything he can to protect them from the virus.

"Do it in a way that's compassionate - talk about how he cares about the people and remind them of that being the core of who he is," she said.

Trump did take a brief moment during his prepared remarks to acknowledge the more than 139,000 Americans who have died from the virus - though he stopped short of taking any responsibility for their deaths.

"We mourn every precious life that's been lost," Trump said. "I pledge in their honor that we will develop a vaccine."