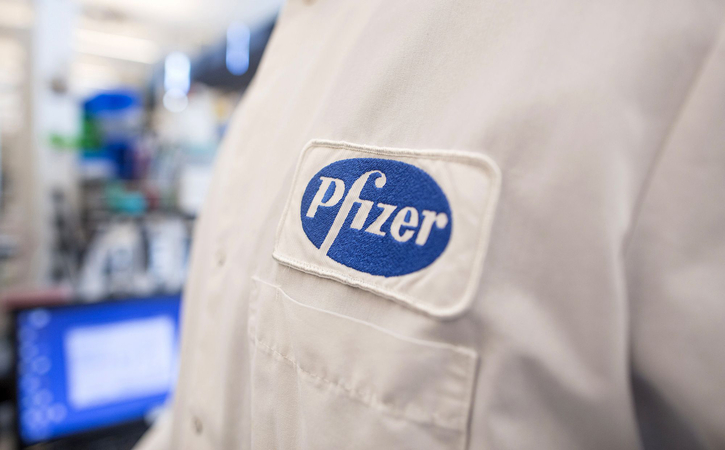 The Pfizer logo on the lab coat of an employee. MUST CREDIT: Bloomberg photo by Scott Eisen

In signing a $2 billion deal to supply their experimental coronavirus vaccine to the U.S., Pfizer and BioNTech are setting a price ceiling of less than $20 a dose that will affect how much other companies can charge to protect people from covid-19.

Pfizer's $19.50 price point takes into account the "public health requirements during the pandemic," said Sally Beatty, a Pfizer spokeswoman. The companies are pursuing a two-dose regimen of one of its vaccine candidates, and the roughly $40 course, Beatty said, is "almost 30% less than what others charge for a seasonal flu vaccine."

Governments worldwide are seeking to blunt a pandemic that's killed more than 600,000 people, and dozens of companies are wrestling with how to price future vaccines. Rival drugmakers are unlikely to exceed the $20 price tag unless they can deliver a product that's more effective, has fewer side effects or doesn't need as many doses, particularly those developing candidates based on so-called messenger RNA technology, such as Moderna.

"This definitely sets a base, I think you can even call it a ceiling, for mRNA vaccine pricing," Brad Loncar, chief executive officer of Loncar Investments, said in an interview. "This price comes right down the middle in what investors think is fair. It will definitely support a profit, and will incentivize companies to continue to innovate further."

New York-based Pfizer, which is evaluating at least four experimental vaccines with Germany's BioNTech, reported positive preliminary data from one of its candidates this week. Beatty said Pfizer "will not rely on taxpayer dollars in the development or manufacture of the vaccine candidate," and thus is shouldering all of the risk in bringing a shot to market.

In the Pfizer deal, the U.S. agreed to secure 100 million doses of its vaccine candidate. The payment depends on approval from the U.S. Food and Drug Administration and the ability to successfully manufacture it, Pfizer's Beatty said. The timeline for supply is not yet known.

The U.S. can acquire as many as 500 million additional doses, though Pfizer "will need to separately negotiate the terms for the remaining doses if the U.S. orders more," according to Beatty.

The U.S. has ordered experimental shots, including one co-developed by the University of Oxford and AstraZeneca, which fell as much as 2.7% in the wake of the Pfizer agreement.

Even with Pfizer setting a moderate price for a shot, the drug giant and its partner stand to profit from their effort.

"If this vaccine prevents disease after one use, we calculate a windfall of more than $15 billion revenue for Pfizer," Sam Fazeli, a Bloomberg Intelligence analyst, said in a note. "We believe this sets the top price for a vaccine, with lower prices elsewhere. Need for repeated use would be the game changer."

The agreement has implications for companies such as Moderna, whose investors see a significant financial opportunity. The U.S. biotech's vaccine could generate sales of more than $5 billion a year, according to Jefferies. Shares of Moderna, Inovio Pharmaceuticals and Novavax have risen sharply this year.

Pricing a covid-19 vaccine is far different than other products because of the potential demand and value, Pfizer chief executive Albert Bourla said in June at a conference.

"If we try to calculate the value of the vaccine for the pricing like any other vaccine," through common market principles, Bourla said, "it would be unethical."

The U.S. deals have stoked concerns that other countries, especially poorer regions of the world, will be left behind. Other rich countries, such as the U.K. and those in Europe, have also secured deals.

On Monday, Pfizer and BioNTech announced a plan to supply 30 million doses of one of their vaccine candidates to the U.K. this year and next, though they did not disclose what they stood to gain from the agreement. Pfizer's Beatty said on Wednesday that the companies have also engaged the Covax program, a group established by Gavi, the Vaccine Alliance, the Coalition for Epidemic Preparedness Innovations and World Health Organization to launch supply discussions.

The U.S. typically pays "the high-water-mark price" when it comes to pharmaceuticals, according to Loncar. It's likely that the U.K and other countries are able to secure the still-experimental vaccine for lesser sums, he said.

The U.S. in May pledged as much as $1.2 billion to AstraZeneca to help make Oxford's vaccine, and the government has backed projects underway at Johnson & Johnson, Moderna and other companies.

The Pfizer vaccine would be free to the American people, according to the government. The U.S moves are part of a larger initiative to secure coronavirus vaccines for the U.S., officially dubbed "Operation Warp Speed."

"Expanding Operation Warp Speed's diverse portfolio by adding a vaccine from Pfizer and BioNTech increases the odds that we will have a safe, effective vaccine as soon as the end of this year," Health and Human Services Secretary Alex Azar said in the statement.