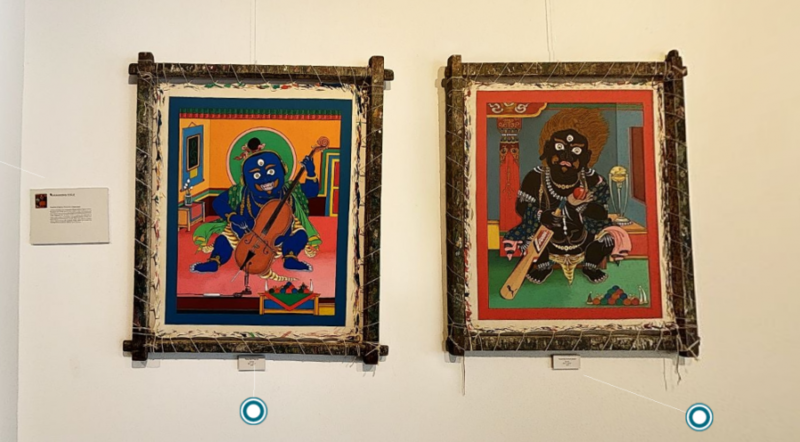 ‘Prayer Flags: Art from the Himalayas’ showcases the diverse cultures of the people living in the mountains, which much of mainstream media fails to represent, and that is refreshing.

When travel restrictions across the world were announced, artists were concerned about how they would pursue their art. Because while art can be undertaken as just a medium of expression, where artists channelise their creativity, at the end of the day, artists need an audience.

But with the number of Covid-19 cases rising every day, and governments extending the shutdown of public spaces, it’s not possible for art enthusiasts to visit art galleries. To fill that void and to keep the Nepali art sector thriving, many art galleries have switched to virtual art exhibitions, among which Windhorse gallery’s ‘Prayer Flags: Art from the Himalayas’ is one.

Located near Bhanimandal, Jawlakhel, the gallery had started the exhibition—its first—physically on February 29. However, because the fear of Covid-19 spread soon after the opening and the lockdown was also brought into effect, many could not witness the works of the 13 artists that were at display. So, on June 23, following the footsteps of other galleries, the Windhorse gallery started a virtual tour of the exhibition, which reflects the diversity and the changing culture and identities of the people living in the Himalayas.

On the ground floor of the one-storey gallery is Pasang Hyolmo’s series ‘The Work of a Himalayan Painter’, which personally stood out the most in the exhibition. An experienced thangka painter, Hyolmo uses his masterful skill of intricate detailing in his artworks and that is vividly seen in the two artworks present in the exhibition.

In one of his works, titled ‘The Work of a Himalayan Painter III’, he uses acrylic on cement to reflect the spiritual elements of his culture that have influenced him. Juxtaposed in a red background, a chakra (wheel) is placed in the middle of the artwork. In Buddhism, the chakra holds a deep and spiritual meaning, and are considered to be energy centers of the body that have psychic and spiritual power to make people move towards the path of bliss and attain Buddhahood. Likewise, they are also considered to be a meeting point between the physical and metaphysical realities of the human world, making his intention of devoting the artwork to highlight the chakra a transcendental one.

Next to his artworks is Gyatso Chuteng’s ‘Kora’, which also pays respect to the tradition of circumambulating around the religious stupa, Boudhanath, that has served as a monument of bond between the Himalayan people from all across the globe. Using Tibetan incense sticks as well as acrylic paint on a wooden panel, Chuteng recreates the circular motion of Kora, depicting a significant tradition of Himalayan culture to the public.

Similarly, like the works of Chuteng, the theme of the artworks of Dawa Thulong also is a depiction of the ancient heritages of the Himalayan culture, that very few people know about.

In ‘Vajrasattva’, he draws the bodhisattva, Vajrasattva, standing in a lotus, with a vajra in one hand which symbolises compassion and a bell in another which symbolises wisdom. As a deity, Vajrasattva is considered as the almighty purifier, and Thulong’s generous use of the colour white serves that purpose, of emitting a certain angelic radiance. As the composition is inspired from the 500-year old mural of Champa Gumba of Mustang, the iconography also serves as a sacred art form that preserves as well as promotes hundreds of years of art and traditions of the Himalayan culture.

His other artwork ‘Detail of Torana’ equally has historical and religious significance. Painting with the help of mineral paints on canvas, he depicts the intricate details of Torana, the decorated frames which can be seen at the entrance of shrines. The painting, which is inspired by the murals of Thubchen monastery in Upper Mustang, depicts the mythical Kirtimukh, a fierce-looking, monster-like creature fighting with two serpents that are in semi-human forms.

But the exhibition is not only filled with traditional art forms, which can be overwhelming, perhaps even tedious, for those who aren’t acquainted with the knowledge of the religious traditions of the Himalayan culture. There are equally evocative and engaging artworks, where the artists have expressed their personal experiences and feelings about their identity and culture.

One such artist with such works is Sonam Dolma. In her two digital paintings, she has depicted her experiences of having an identity crisis as she feels divided between the current realities and the traditional cultures which she has inherited from her ancestors.

Titled ‘World ain’t Goody Goody’, one of her works depicts a woman wearing makeup that is reminiscent of Joker, a pop-culture comic character of DC comics. Along with similar makeup, the woman is shown to be wearing parts of Joker’s costume as well, paired with the traditional dress, bakhu. By juxtaposing two culturally different costumes, Dolma has merged pop culture with her ancestral culture to reflect how both have shaped her, leading her to have an identity crisis, as she doesn’t have a sense of belonging to one particular culture.

Likewise, her other painting ‘Jhutok’ also features a woman adorned in traditional jewellery as well as having tattoos all over her hand, which reflects her theme of representing the identity crisis shared by most of the new generations of people from the Himalayan culture.

Tenzin Gyurmey’s ‘USA Tsampa’ is another evocative and personal work based on the underlying theme of the migration of the Tibetan people, who had to leave their homelands. In a woven sack by using acrylic paints, he juxtaposes 59 identical unicorns which serves as a metaphor to denote both the physical and emotional journey his parents undertook when they were forced to leave their homes and settle in a foreign country.

Along with the unicorns, the work features human figures as well. In tales, unicorns are enchanting creatures known for their strength, but Gyurmey shows the opposite: in the painting, it’s the humans who are supporting the strong unicorns. By changing the power dichotomy, Gyurmey reflects the endurance and strength of people, like his parents, who continue on their paths even when faced with adversities.

In the background of the sack, the words ‘USA’ also appears, which according to the artist reflects the journey of his parents as Tibetan refugees in Himachal who were provided with rice sacks by the American government.

The fine curation is what makes this exhibition important and special. As a new art gallery, holding its first-ever exhibition, the curators deserve applause for bringing such diverse artworks reflecting Himalayan culture from 13 different artists from all over the world. The beauty of the exhibition is that it features all kinds of works, be it the ones that depict the personal journeys of the people from the Himalayan culture or the artworks that represent old traditions, allowing viewers to get a peek into both the past and the present.

Likewise, seeing an entire exhibition dedicated to depicting the cultures of the Himalayan people, which much of mainstream media fails to represent, is refreshing. The artworks of Himalayan culture are often viewed as something that only has ornamental purpose because people fail to acknowledge their cultural values and significance. But by providing such works with distinct space, the gallery sheds light to the fact that art thrives in all cultures and deserves appreciation.

The use of technology for the virtual exhibition is equally admirable as the gallery has tried to make the experience immersive and engaging for the viewers, as it has taken care of even the smallest of details, like providing information about the artist and artworks, just a click away. However, the information in some artworks is so direct that it hinders and undermines the audience’s process of interacting and interpreting artworks.

Nevertheless, for their first-ever exhibition, the effort the gallery has put in to give artists a platform to reflect different cultures is a feat in itself. The move also raises expectations for the gallery: to be an alternative space that provides room for diverse artworks to grow.

Here's the link to the exhibition: https://my.matterport.com/show/?m=FjeDk5FBxk5