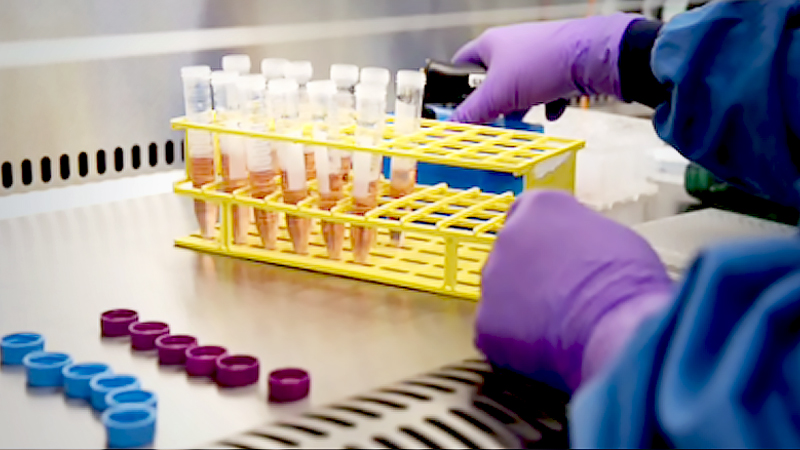 A scientist works with stem cells inside a stem cell research laboratory at the GlaxoSmithKline Research and Development Center in Stevenage, U.K., on Tuesday, Nov. 26, 2019. MUST CREDIT: Bloomberg photo by Simon Dawson.

Britain is snapping up supplies of future coronavirus vaccines, rushing ahead of other countries in a bid to end the pandemic.

The government signed a deal with partners GlaxoSmithKline and Sanofi to secure as many as 60 million doses of their experimental shot. The agreement on Wednesday highlights the aggressive steps the U.K. government is taking to obtain inoculations for its population of 66 million people. Britain has now secured the highest number of doses per capita, putting the country ahead of the U.S., according to London-based analytics firm Airfinity.

Desperate for a way out of the crisis as the death toll mounts, governments are pursuing vaccines before anyone knows whether they will work. The Glaxo-Sanofi pact follows the U.K. government's move last week to buy 90 million doses of potential vaccines from a partnership of Pfizer and BioNTech SE as well as from Valneva SE. The University of Oxford's partner, AstraZeneca, intends to make as many as 30 million doses available to the U.K. by September as part of a pact to deliver 100 million doses.

That amounts to at least 250 million doses of different vaccines. Countries may need large quantities because it's not clear how many shots under development will get across the line, and some may require repeated jabs to be effective.

"Spreading the risk is a sensible strategy," said Graham Cookson, chief executive of the Office of Health Economics, a research firm. "However, it's vital that countries and companies collaborate to ensure global access for all."

As the U.K., the U.S. and other wealthy nations rush to arrange supply agreements with vaccine makers, health advocates worry that the rest of the world will be left behind. Pfizer and BioNTech last week reached a roughly $2 billion deal to supply their coronavirus vaccine to the U.S.

Sanofi and Glaxo plan to provide a significant portion of worldwide capacity in 2021 and 2022 to a global initiative that's focused on accelerating development and production and deploying shots equitably.

While some companies have said they plan to profit on their covid-19 vaccines, others such as AstraZeneca and Glaxo have pledged not to during the pandemic. Glaxo CEO Emma Walmsley said the company would rely on the World Health Organization's guidance on when the pandemic has ended and plans to invest any short-term returns back into planning for future emergencies and donations to developing nations.

"We've been very clear we don't expect to profit from these vaccine partnerships during the pandemic," Walmsley said on a call with reporters.

The companies are also in talks to sell the vaccine to the U.S., the European Union and global organizations, Sanofi said. Sanofi and Glaxo had been discussing such a deal with the U.K., valued at about $646 million (500 million pounds), a person familiar with the matter said earlier this month.

Sanofi is in late-stage talks with the U.S. and the EU, and announcements could come soon, CEO Paul Hudson told investors.

Glaxo and Sanofi, two of the world's biggest vaccine makers, are following developers including Oxford, Moderna Inc. and Pfizer in a sprint to deliver a shot to help defeat a pathogen that's killed more than 650,000 people.

Sanofi, based in Paris, and Glaxo, the British pharma giant, still see an opportunity to make a significant impact. The French company is targeting approval in the first half of 2021.

Sanofi on Wednesday raised its profit outlook for the year as some of its key drugs offset covid-19 disruption, while Glaxo said its 2020 earnings forecast is at risk if routine vaccination rates fail to recover after lockdowns. Sanofi's stock rose less than 1%, while Glaxo fell 1.6%.

For the U.K., the new agreement gives the country about 3.75 doses per capita, compared with about 1.2 for the U.S., though the figures exclude supplies the U.S. is acquiring from Moderna and are likely to change, according to Airfinity. Coverage per capita would be half that given vaccines may require two doses.

"This diversity of vaccine types is important because we do not yet know which, if any, of the different types of vaccine will prove to generate a safe and protective response to covid-19," Kate Bingham, chair of the U.K. government's vaccines taskforce, said in a statement. "Whilst this agreement is very good news, we mustn't be complacent or over-optimistic."