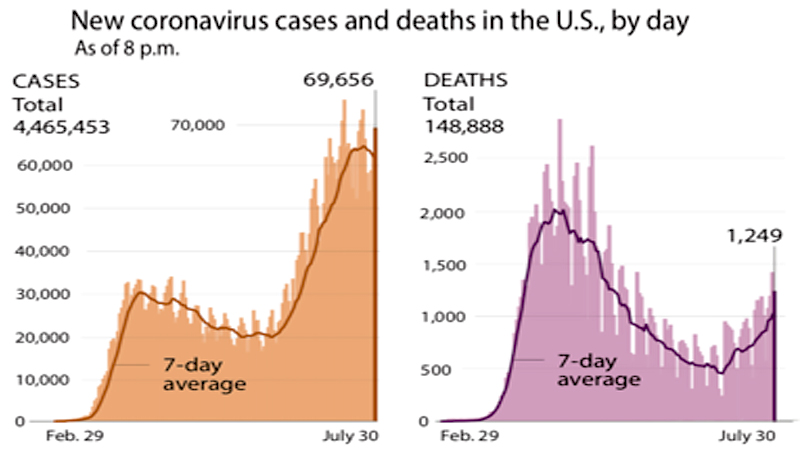 WASHINGTON - Public health experts called for urgent new measures Thursday to halt the spread of the coronavirus amid warnings that the U.S. economy is in a historic and devastating contraction as covid-19 is killing Americans at the rate of about one every minute.

The stock market took a dive after the Commerce Department reported the economy shrank by 9.5% in the second quarter, the biggest recorded decline since the government began keeping track 70 years ago. The government also reported jobless claims climbing again last week by 1.4 million, another sign the recovery is fizzling. GDP shrank at an annual rate of 32.9%, according to the Bureau of Economic Analysis.

The dismal statistics underscored the fragility of any economic recovery, as many states are reversing their attempts to reopen for business and have imposed new restrictions.

At an evening news briefing, President Donald Trump tried to swat away the raft of bad news about the economy and the disease, which he referred to as the "China virus" and compared to a plague.

"It's China's fault," he said flatly.

Trump noted a resurgence of the disease in states that appeared to have vanquished covid-19 early, largely due to draconian restrictions, and suggested the praise was premature.

"Governors that were extremely popular are not so popular anymore," he said. "They were held up as models to follow, and then they got it."

But in deflecting any blame for the spread of the virus he once predicted would miraculously vanish in days and now has killed nearly 150,000 Americans, Trump offered several misrepresentations.

For example, he said children were "immune" to the disease and should return to school this fall. In fact, immunologists have said that while children under the age of 10 are unlikely to transmit the novel coronavirus, children older than 10 can spread it as easily as adults.

Trump also predicted a rapid economic recovery from the precipitous drop in employment and consumer spending caused by the pandemic.

"I think next year's going to be an excellent year, maybe one of our best years ever from an economic standpoint," Trump said.

Jerome Powell, the chair of the Federal Reserve, said any recovery depends on whether Americans are willing to embrace behavior that can beat back the virus.

"The path of the economy is going to depend, to a very high extent, on the course of the virus and on the measures we take to keep it in check," he said Wednesday. "Social distancing measures and a fast reopening of the economy actually go together. They're not in competition with each other."

Trump also used the coronavirus briefing to attack mail-in voting, hours after his Republican allies joined Democrats to rebuff his suggestion to delay the Nov. 3 election. Trump said he wants the election decided quickly, rather than drag on until millions of mail-in ballots are counted and determined to be legitimate.

"I don't want to see that take place in a week, after Nov. 3, or a month," he said. "Or frankly, with litigation and everything else that could happen, it could take years. Years. Or you never even know who won the election."

Trump sounded more muted than combative as the death toll continued to mount and experts warned of the potential of economic collapse.

Nationwide, 1,400 people infected with the coronavirus died Wednesday, the highest number since May. Several states, including Florida and California, reported record highs for deaths in a single day. More than 4.4 million cases have been reported in the United States, and nearly 150,000 people have died, according to the Washington Post count.

Among the deaths Thursday was well-known businessman turned politician Herman Cain, who sought the Republican nomination for president in 2012. He had attended a June 20 rally for Trump in Tulsa, Okla., where he was photographed maskless in a crowd of others who were also without masks, but it was not determined whether that is where he contracted the virus.

Optimism is in short supply. Even though new infections have leveled off in some of the hardest hit states in the South, they are creeping up elsewhere, threatening to surge.

During an appearance on Fox News, Birx said there remains a "very serious pandemic" in Southern states. Despite signs of improvement, she added, the situation is deteriorating elsewhere.

"So now we see the virus, probably because of vacations and other reasons of travel, moving up into Kentucky, Tennessee, southern Ohio, Missouri, Iowa, Kansas, Nebraska," she said. "And, of course, we continue to have problems across the coast - Washington, Oregon, California, Idaho and Utah, and now increases in Colorado."

Birx urged people to follow mandatory measures that Trump and many Americans have resisted and called alarmist or infringements on their liberties.

"We believe if the governors and mayors of every locality right now would mandate masks for their communities and [if] every American would wear a mask and socially distance and not congregate in large settings where you can't socially distance or wear a mask, that we can really get control of this virus and drive down cases as Arizona has done," Birx said.

The Association of American Medical Colleges issued an ominous warning, along with a "road map" of actions the country must take to avoid calamity.

"If the nation does not change its course - and soon - deaths in the United States could be well into the multiple hundreds of thousands," the organization said.

The Johns Hopkins Center for Health Security released a report Wednesday with 10 recommendations for action and another stark warning.

"Unlike many countries in the world, the United States is not currently on course to get control of this epidemic. It's time to reset," six scholars wrote.

Despite the concerns over the rising death toll and economic impact, at least 17 of 21 states flagged as coronavirus "red zones" are not following all recommendations by the government's coronavirus task force.

Rep. James Clyburn, D-S.C., the chairman of the House's Select Subcommittee on the Coronavirus Crisis, which was formed to assess the Trump administration's response to the pandemic, wrote governors of several red-zone states urging them to heed experts' advice.

The recent task force report "recommends far stronger public health measures than the Trump Administration has called for in public - including requiring face masks, closing bars, and strictly limiting gatherings," Clyburn wrote in a letter to Birx and Vice President Mike Pence. "Yet many states do not appear to be following these unpublished recommendations and are instead pursuing policies more consistent with the administration's contradictory public statements downplaying the seriousness of the threat."

Ohio Gov. Mike DeWine, a Republican, on Thursday asked the state's liquor control commission to cut off alcohol sales at 10 p.m. each night. Any alcohol purchased by that hour would have to be consumed by 11.

Some Republican lawmakers in the state opposed the order, and court challenges to its constitutionality are expected. Elsewhere, some of the restrictions being imposed by local and state authorities are openly flouted.

Senate candidate Tommy Tuberville, R-Ala., is fundraising and holding in-person meetings in Washington this week, defying orders from D.C. Mayor Muriel Bowser, a Democrat, that visitors from Alabama and other coronavirus hot spots quarantine for 14 days upon arrival.

Tuberville spent at least some of his time at the Trump International Hotel, according to a photo posted to Facebook by Rep. Bruce Westerman, R-Ark., showing the two men in the hotel lobby on Tuesday night. Neither man was masked.

Alabama's coronavirus cases are surging, with more than 25% of its total cases appearing in the past two weeks, according to state data.

Rep. Louie Gohmert, R-Texas, defiantly walked the halls of Congress maskless and was not practicing social distancing before he was told Wednesday that he could not fly with Trump on Air Force One to Texas because he had tested positive for the virus.

Even then, he returned to the Capitol, ignoring expert advice on how to avoid spreading covid-19 germs, and filmed a video questioning the effectiveness of masks. He suggested that he may have caught the disease from a mask.

Gohmert's mask skepticism spurred House Speaker Nancy Pelosi, D-Calif., to order all lawmakers to wear a mask while appearing on the chamber floor.

And earlier this week, the White House confirmed that national security adviser Robert C. O'Brien had tested positive for the coronavirus and was working from home after experiencing mild symptoms of the disease. In mid-July, O'Brien was in Paris, where he was photographed with his counterparts in meetings in which they sat around a table close to one another without wearing masks. It was not clear when he was first infected.