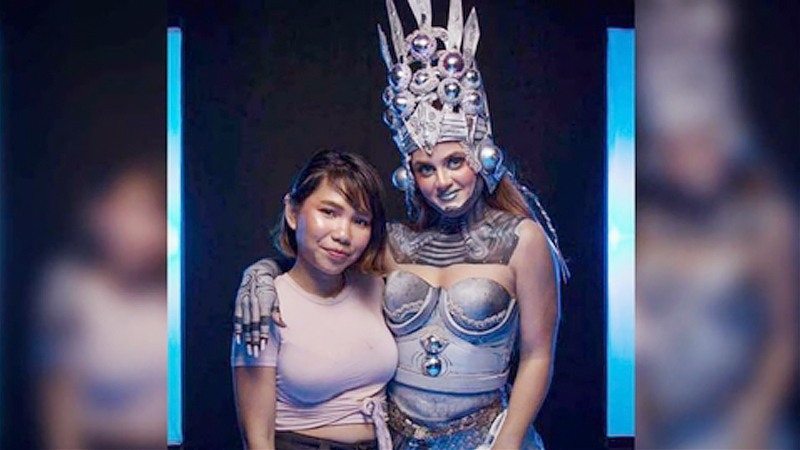 The work is intensely precise and the results look incredibly life-like.

The Los Angeles-based Poth Molita, who prefers to be known as Apple, has 35 film credits to her name on IMBD, a reflection of the time she spent dedicated to the craft once she realised it was her calling.

Movie makeup involving special effects is not a widely known skill in Cambodia and Apple is hoping to change that by sharing her technical skills in her homeland.

“I enjoy spending my nights, sitting for one to five hours just doing makeup and painting myself. To me, it’s like taking a trip and going on an adventure. It’s relaxing and almost like meditation. I also love mixing the beauty looks with gore and scary makeup.

“I wake up every day excited to find new makeup inspiration. The process of having the picture in my head, starting to do it and finally seeing the result of my work is the greatest feeling I’ve had,” Apple says.

Apple grew up in Stung Treng province and became interested in makeup during her senior year studying for a Bachelor’s degree in education at the Pannasastra University of Cambodia.

The self-taught makeup artist dropped out of school and decided to chase after her dream of doing special-effects makeup for a living.

One of her friends is a movie producer and after noticing her talent, asked Apple to be the makeup artist for his film. She took the job and her first official film credit became Run, an amateur zombie movie shot in Cambodia.

“Back then I knew nothing about makeup or film. I just happily accepted [the offer], the 28-year-old Apple says.

“In 2012, I created a formal page to post a bunch of photos from my makeup practice on myself, and I received lots of compliment from my foreign and Khmer friends,” she says.

She started to get noticed and soon received offers to apply makeup on more movie sets.

“What started mostly as a personal challenge for myself eventually got so much attention from teenagers in Cambodia.

“I developed my creativity and learned to interact with a wide variety of people while working with film crews and clients. I believe in being open to taking risks and trying new techniques,” Apple says.

Her English proficiency also played a role in advancing her career. She was able to communicate and make friends with filmmakers who would later include her in their movie projects.

During her time in the industry, she’s worked at fashion photoshoots, movie sets and training workshops.

But her passion is for special-effects makeup techniques often used in horror movies and creative fashion shoots.

Her work took her to photoshoots across Asia and in 2016, she worked on Angelina Jolie’s Golden Globe-nominated movie, First They Killed My Father.

The film is based on the true story of Cambodian-American Loung Ung, a young girl who is forced from her home in Phnom Penh during the Khmer Rouge takeover and separated from her family. It was filmed in Siem Reap, Battambang and Phnom Penh. 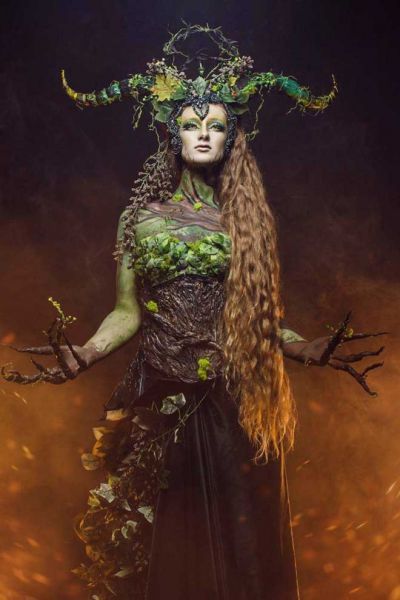 “In the film, I worked closely with the department head of makeup. He kept encouraging me to go to America or England to study. He said I was so talented. In the end, I got a scholarship to study in the US at a cinema makeup school in 2017 and graduated in 2018,” she says.

In the US, Apple took courses on special effects and creature design. She dramatically developed her skills and gained entry into Hollywood after she volunteered for jobs.

For the first couple of months, it was hard to get by, but as more people saw her work, they were mesmerised and captivated by her creativity and professionalism.

“Now I have people calling and emailing me every day,” she tells The Post.

“I have done 10 to 15 films in America such as Judgement Call, Airport Security Squad, Lisa and Liza, Harana, The Wall and many more,” she says.

Apple says she had to be cautious while working with people because they were strict and highly demanding.

“You need to reach their standard. Only you can have your work promoted. If you want to be an international makeup artist, you need to be open to whatever is new to you. Never stop learning. Keep developing yourself,” she says.

Her work is influenced by nature, Khmer architecture, culture and everything around her. She’s also inspired by sea and jungle creatures and wants to raise environmental awareness, especially for endangered species in Cambodia.

“In my makeup art, I use hand painting. Sometimes I use airbrushes, but I combine other materials as well. It can be a sponge, paper, fake flowers or spray paint. It used to take me a very long time to finish one but if I do it with professional people, I go as fast as possible and it takes four hours maximum for the basic creatures.” she says.

For one of her actresses-turned-creatures, Apple created a Mother Earth character using leaves, branches and earth-toned makeup to complete her vision. The final look blends nature and animal, with the actresses’ arms turning into branches and her fingers into twigs.

Apple says she is motivated to share her talent with others.

“After Covid-19 ends, I’m planning to go back and open a school in Cambodia. I hope to create a bridge between the two countries by bringing people from Hollywood to teach there and inviting Cambodians to the US if they want to learn.

“Hard work pays off. Your dream is always worth fighting for,” she says.