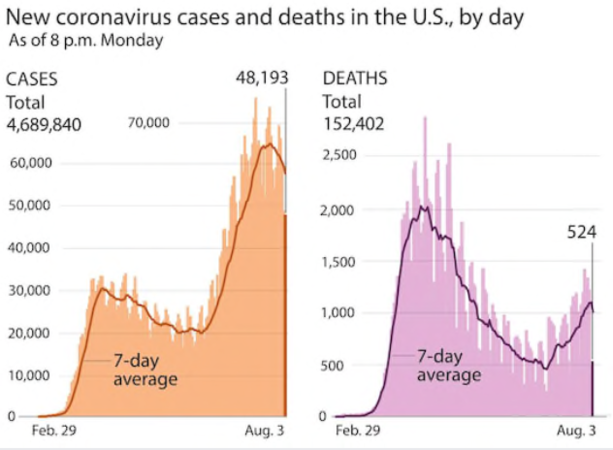 WASHINGTON - The novel coronavirus is surging in several Midwestern states that had not previously seen high infection rates, while average daily deaths remained elevated Monday in Southern and Western states hit with a resurgence of the disease after lifting some restrictions earlier this summer.

Missouri, Montana and Oklahoma are among those witnessing the largest percentage surge of infections over the past week, while, adjusted for population, the number of new cases in Alabama, Florida and Mississippi still outpaced all other states, according to a Washington Post analysis of health data.

The University of Texas at Austin notified students that parties are prohibited when the campus reopens in three weeks. The school cited city health guidelines prohibiting groups larger than 10 people and requiring a mask when out in public.

President Donald Trump continued his push to fully reopen schools, even as some of the nation's largest districts are delaying in-person instruction amid continuing spread of the virus.

Trump also said the United States is doing much better dealing with the virus than most other countries - a claim inconsistent with the facts - and accused the news media of trying to make him and the country look "as bad as possible."

At least 4.6 million coronavirus cases and 151,000 fatalities have been reported in the United States since February.

Despite growing momentum in the search for a vaccine and Trump's confident assessment Monday that "we're on pace to have a vaccine available this year, maybe far in advance of the end of the year," the head of the World Health Organization (WHO) warned that "there's no silver bullet at the moment, and there might never be."

WHO Director General Tedros Adhanom Ghebreyesus said Monday that "a number of coronavirus vaccines are now in Phase 3 clinical trials, and we all hope to have a number of effective vaccines that can help prevent people from infection."

He cautioned, however, that "of course there are concerns that we may not have a vaccine that may work" or that its protection would be effective for a short time.

The economic fallout from the virus widened, with the parent company of Men's Wearhouse declaring bankruptcy as people have stayed away from offices and the suits and other business attire once needed for work.

Tailored Brands, which also owns Jos. A. Bank, K&G and Moores, filed for Chapter 11 protection on Sunday evening, the same day that department store chain Lord & Taylor did so. They are among about a dozen large retailers that have tipped into bankruptcy as pandemic-fueled store closures sent sales plummeting.

Top executives at Disney, IBM, Mastercard and Microsoft were among more than 100 business leaders who called on Congress to provide emergency relief for small businesses facing economic calamity.

In a letter sent to congressional leaders of both major political parties Monday, the executives issued a dire warning of mass closures triggered by the coronavirus, as companies report declining revenue and face the prospect of shutting down yet again to contain the outbreak.

The signatories put forward a series of recommendations, including federally guaranteed loans to last into 2021, flexibility in how those loans are put to use, partial loan forgiveness for small and midsize companies that have suffered significant revenue declines, and a focus on funding for businesses owned by people of color, who have less access to funding.

More than 4 million businesses have received emergency loans from the Small Business Administration, with Congress approving $700 billion in funding to support them. But for the 30 million small businesses in the country, that funding was too limited and short-lived, business leaders say. The letter calls for a more robust and sustained effort from the federal government.

"We cannot stress enough the urgent need to act," the letter says. "Every day that passes without a comprehensive recovery program makes recovery more difficult."

The business leaders predict another wave of permanent business closures by Labor Day if the government does not provide aid.

Trump continued to insist that hydroxychloroquine is an effective treatment for the coronavirus even as leading health officials in his administration have concluded otherwise. The president suggested that opposition to its effectiveness is because he supports it, not because of science.

He recounted taking the anti-malaria drug in May after it was announced that a couple of White House staffers had tested positive for the coronavirus.

Pressed by a reporter about the differing opinions of leading health experts, including Anthony Fauci, the nation's top infectious-disease official, Trump stood his ground.

"I don't agree with Fauci on everything," Trump said.

In several recent interviews, Fauci has dismissed hydroxychloroquine as a treatment for the coronavirus, calling it ineffective.

Trump also feuded publicly with the other leading official face of the U.S. government response. Trump on Monday tweeted criticism of Deborah Birx, the physician overseeing the White House's coronavirus efforts, a day after she warned that the United States is entering a "new phase" of the pandemic.

Trump tweeted that after House Speaker Nancy Pelosi, D-Calif., criticized Birx for being "too positive" about his handling of the pandemic, the doctor "took the bait & hit us." He appeared to be referring to Birx telling CNN on Sunday that increasing outbreaks in rural and urban areas are "different from March and April" and "extraordinarily widespread."