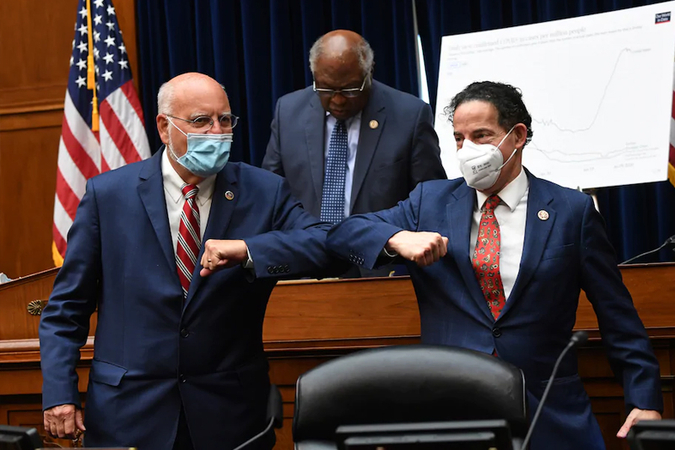 Robert Redfield, director of the Centers for Disease Control and Prevention, left, and Rep. Jamie B. Raskin (D-Md.) greet one another with an elbow bump after July 31 hearing. (Kevin Dietsch/AP)

The increase in deaths in New York City during the early months of the covid-19 pandemic rivals the death toll there at the peak of the 1918 flu pandemic, according to an analysis published Thursday.

The comparison, published online in the medical journal JAMA Network Open, found that the number of deaths from all causes was roughly equal during the two peak months of the flu epidemic and the first 61 days of the current outbreak.

"For anyone who doesn't understand the magnitude of what we're living through, this pandemic is comparable in its effect on mortality to what everyone agrees is the previous worst pandemic," said Jeremy Faust, an emergency physician at Brigham and Women's Hospital in Boston who led the team that conducted the data review.

There were 31,589 deaths from all causes in New York during the peak period of the flu epidemic, nearly the same as the 33,465 tallied in the 61 days after the first death on March 11 of this year, the analysis shows.

New York in 1918 had a smaller population of 5.5 million people, so the death rate of 287 per 100,000 "person-months" was greater than the 202 of the current covid-19 pandemic. Person-months is a way of measuring the number of deaths in a population during a specific period of time.

But the current outbreak has seen a more dramatic rise in "excess deaths" - the number of fatalities above what would be expected in a normal year. With better medical care, public health, hygiene and medicines such as antibiotics, New York typically has about half the death rate of a century earlier - about 50 per person-month instead of 100. So the current outbreak has quadrupled the death rate, while the flu pandemic nearly tripled it.

The Post has reported that the United States recorded about 37,100 excess deaths in March and the first two weeks of April, nearly 13,500 more than were attributed to covid-19, the disease caused by the novel coronavirus, during that time. The report was based on an analysis of federal data conducted for The Post by a research team led by the Yale School of Public Health.

The findings on Thursday brought the latest reminder of the startling human cost that the current pandemic has inflicted in recent months - and not just in New York, but around the nation.

"This is the greatest public health crisis that's hit this nation in a century," Robert Redfield, director of the Centers for Disease Control and Prevention, said during an interview with WebMD, noting that years of underinvestment in public health infrastructure had left the United States "unprepared" for the pandemic and its still-growing toll

Redfield said the mounting fatalities will make covid-19 "clearly" one of the leading causes of death in the country by the year's end.

Still, Redfield said he is optimistic that a vaccine could be ready for production before the end of the year, as a particularly dangerous flu season looms. He was similarly hopeful that the high rate of infections in the country would drop if Americans systematically wear masks, maintain social distancing, practice good hygiene and avoid large gatherings.

"You do those four things, it will bring this outbreak down," he said. "But if we don't do that, as I said last April, this could be the worst fall from a public health perspective we've ever had."

Also on Thursday, presumptive Democratic presidential nominee Joe Biden called for an immediate nationwide mask mandate that would require everyone in the country to wear face coverings when outside for the next three months.

Doing so would save the lives of at least 40,000 people, he said in brief remarks in Delaware that followed a lengthy briefing on the coronavirus crisis.

"Every single American should be wearing a mask when they're outside for the next three months at a minimum," Biden said, emphasizing each word. "Every governor should mandate it."

Biden described that simple act as a civic responsibility, comparing it with giving blood or donating food to those in need. Although masks can be uncomfortable, he said, they are key to getting life back to normal.

"Be a patriot. Protect your fellow citizens," he said. "Step up. Do the right thing."

President Donald Trump, who earlier this year expressed doubt about the value of masks, has since endorsed their use. "Maybe they're great and maybe they're just good, and maybe they're not so good," Trump said Thursday during a White House coronavirus briefing. "But frankly, what do you have to lose?"

But he slammed Biden's proposal. "He thinks it's good politics I guess," the president said.

In few places are the looming worries about the months ahead more immediate than in the nation's public schools, where families and administrators alike face a series of excruciating decisions.

Southern states such as Louisiana, Georgia, Arkansas and Texas have some of the earliest back-to-school start dates in the country. Parents, educators and elected officials have watched these early districts closely for clues on whether it's safe to send teachers and students back into classrooms nationwide - even as the Trump administration has insisted that schools need to return to in-person learning.

So far, the news is not encouraging.

Days after a photo went viral showing students packed into a hallway at North Paulding High School in suburban Atlanta, the district confirmed at least 35 new infections, according to WXIA-TV, which obtained a letter sent to parents.

In central Georgia, people in at least seven schools in the Houston County School District had tested positive for the coronavirus as of late Wednesday, the Macon Telegraph reported.

In Louisiana's Livingston Parish, at least 150 students and staff have been forced to quarantine after positive cases emerged there, according to the Advocate of Baton Rouge.

Schools that opened even earlier have seen similar outcomes: A Mississippi school that resumed classes the first week of August reported one infected student; within two weeks, 116 students were sent home to quarantine.

If schools remain in limbo, so too do millions of American businesses and workers who are navigating a wave of unemployment and bankruptcies.

AMC Theatres, the country's largest movie theater chain, announced Thursday it will resume operations next week after a five-month shutdown, becoming the latest service-sector giant to reopen to the public at a time when infections remain high throughout the United States.

More than 100 AMC theaters in at least 19 states will start screening movies again starting Aug. 20, the company said in a statement. To lure customers back in, all tickets that day will be 15 cents - a campaign AMC is branding "Movies in 2020 at 1920 Prices."

Guests and workers will be required to wear masks at all times, and auditoriums will operate at 30 percent capacity or less, depending on local restrictions. The company said it will also make hand sanitizer available and regularly disinfect its facilities.

The pandemic has forced AMC into a dire financial position. It furloughed more than 600 corporate employees in the spring, and in June, after reporting a $941.5 million drop in first-quarter revenue, the company warned in a financial filing that it had "substantial doubt" about its ability to stay afloat.

Meanwhile, about 960,000 workers filed for unemployment insurance last week, which marks the first time that initial claims dipped below 1 million since mid-March, when the pandemic first took hold and stay-at-home orders vacated workplaces.

The drop in jobless claims comes as the economy takes prominence in the presidential election. Trump has been touting the numbers of jobs that have been regained in the past three months, even though the unemployment rate and weekly claims remain around historic highs.