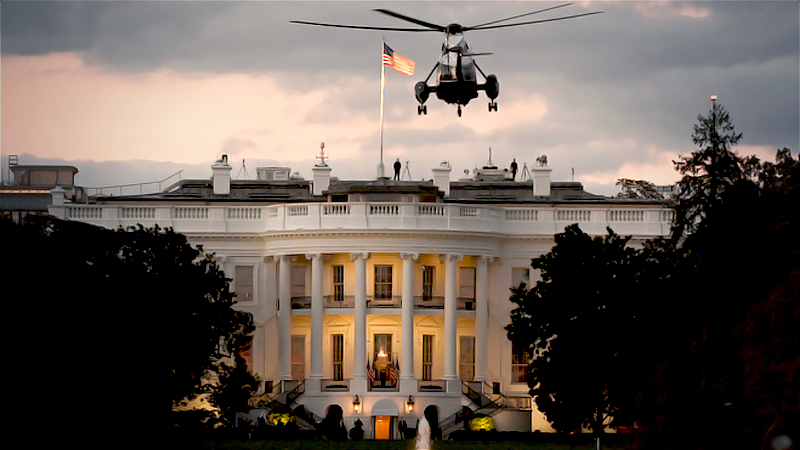 President Donald Trump returns to the White House on Marine One after being treated for covid-19 at Walter Reed National Military Medical Center on Monday, Oct. 5, 2020. MUST CREDIT: Washington Post photo by Matt McClain

WASHINGTON - President Donald Trump left an elite medical center Monday evening as his doctors acknowledged that they were entering "uncharted territory" and - citing privacy laws - continued to withhold information that could illuminate the president's prognosis for recovering from covid-19.

Trump's determination to appear in control in the waning weeks of the presidential race left unclear whether he or his doctors were calling the shots, especially because members of his medical team at Walter Reed National Military Medical Center continued to cherry-pick what they shared with the public. They said that his oxygen levels were normal and that he had no fever, but they refused to answer questions about results from lung scans, his last negative test for the coronavirus or why he is receiving the steroid dexamethasone, typically reserved for patients with severe illness.

The president returns to the White House at a fraught moment in his recovery - before he has seemingly escaped a period when some patients are known to crash.

"The problem with covid-19 is that people's condition can deteriorate rapidly, even after days of stability," said Harlan Krumholz, a cardiologist and health-care researcher at Yale University and Yale New Haven Hospital. "And so we are more accustomed to be cautious with people with high risk."

The president has received care accessible to few other Americans. He was given a brew of laboratory-made antibodies that fewer than 10 other patients have received outside of clinical trials. And for him, returning home means arriving at a place that can be adapted to cater to his needs, Krumholz and others said.

Jonathan Reiner, a George Washington University Hospital cardiologist, said that in an emergency, the White House medical unit "can do what an emergency room can do in the first 15 minutes" - someone could be resuscitated and stabilized during a heart attack, for example, and then transferred to a hospital. For ongoing treatment, he said, it would be wise for Trump to remain hospitalized.

"It makes zero sense to move him from Walter Reed," Reiner said.

At a Monday news conference, White House physician Sean Conley said doctors were "cautiously optimistic and on guard" about Trump's discharge. But he said the benefits of returning to the White House outweighed the risks.

"Every day a patient stays in the hospital unnecessarily is a risk to themselves," Conley said. "And right now there's nothing that's being done upstairs here that we can't safely conduct down home."

But Conley acknowledged that the medical team is in "uncharted territory" with the mix of medications the president has been given and that the dangerous period for the infection is not over. He's "looking to this weekend" for assurance that Trump has cleared rough waters.

"If we can get through to Monday" of next week, he said, doctors will "take that final deep sigh of relief."

Conley declined for the third briefing in a row to answer additional questions about X-rays and other images taken of Trump's lungs, and about other key data, such as when he last received a negative coronavirus test before falling ill. Instead, Conley emphasized symptoms the president was not experiencing: A "slight cough" was gone. There were never complaints of muscle aches. And fever-reducing drugs had not been deployed for at least 72 hours.

"He's up and back to his old self, predominantly," Conley said.

In the White House, Trump's doctors will be vigilant for sudden changes, specialists predicted.

"You would want to be prepared to take care of any sudden unanticipated or very concerning event," said Jeanne Marrazzo, an infectious-diseases expert at the University of Alabama at Birmingham. The biggest risk, she said, would be the sudden onset of acute respiratory distress syndrome, which sometimes occurs with covid-19, the illness caused by the novel coronavirus. Patients' lungs fill with fluid, and they cannot breathe on their own.

While Trump could get supplemental oxygen at the White House, "if I were that sick, I would want to be at Walter Reed," she said.

Marrazzo said she would also be on the lookout for cardiac abnormalities, especially given Trump's age and lack of exercise. She said covid-19 causes heart problems including myocarditis, heart failure and clotting. While Trump could be whisked back to Walter Reed in the Maryland suburbs if problems developed, she said, "lots of things can happen in 20 minutes, lots of things can happen in five minutes."

Daniel Kaul, an infectious-diseases expert at the University of Michigan, said people of Trump's age and with similar severity of illness - to the extent that is known - "usually have a pretty slow recovery, with weeks and sometimes months of cognitive difficulties, shortness of breath, severe fatigue."

Like other experts, Kaul said it is highly probable that Trump had pneumonia.

At the briefing, Conley selectively invoked health privacy laws known as HIPAA - the Health Insurance Portability and Accountability Act - when questions arose about the president's respiratory-system scans or whether he remained infectious.

Asked when Trump last tested negative for the coronavirus, Conley replied, "HIPAA precludes me from going into too much depth."

When asked about imaging tests of the president's lungs, Conley responded, "So there are HIPAA rules and regulations that restrict me in sharing certain things for his safety and his own health."

The president's doctors showed no such hesitancy in disclosing details about his temperature, blood pressure, heart rate and blood oxygen level - all of which they said were normal.

Trump minimized in a tweet Monday the dangers presented by the virus that has felled at least 209,000 people in the United States.

"Don't be afraid of Covid. Don't let it dominate your life," he tweeted. "We have developed, under the Trump Administration, some really great drugs & knowledge. I feel better than I did 20 years ago!"

Trump returns to a White House complex with two medical clinics, according to people familiar with the facilities: a small one on the ground floor available to the first family and others working in the building, and a larger one in the Executive Office Building. The latter unit is equipped to stabilize patients needing urgent care after incidents ranging from an accident to a heart attack or stroke. The goal is to stabilize patients before transferring them to a hospital.

For a scheduled procedure, presidents typically go to Walter Reed; for trauma, they go to George Washington University Hospital, where Ronald Reagan was treated after being shot almost four decades ago.

Health officials from current and past administrations agreed that the White House medical unit can bulk up on staffing and equipment to ensure that it can care for and at least stabilize a patient who takes a turn for the worse.

"But it's really inefficient and risky compared to being on site in a hospital" with Walter Reed's capability, said a health official from a previous administration who spoke on the condition of anonymity to freely discuss the topic.

Greg Martin, a pulmonary critical-care specialist at Emory University, said Trump's blood oxygen levels could be tracked constantly through a finger monitor available at drugstores. The president would be watched for changes in mental status as a side effect of medications, especially the steroid dexamethasone, which might include difficulty with attention, depression or mania.

His blood would probably be tested several times a day for changes in coagulation or inflammation - those might indicate a higher risk of clotting or that his body may be heading into a dangerous "cytokine storm," which would require more serious interventions. Doctors may run an echocardiogram on his heart once a day to look for signs of a hardening of the walls, which is a known and relatively common issue with covid-19.

But Martin cautioned that there are complications of covid-19 for which there is often no warning or advance notice: strokes or heart failure due to microclots, or a pulmonary embolism from a clot in the legs or other part of the body suddenly moving to the lungs.

"These are things you wouldn't know are going to happen until they do," Martin said.

The White House did not respond to questions Monday afternoon about whether new equipment or personnel had been brought in to treat Trump.

The degree of monitoring available from a staff of physicians, nurses and physician assistants could be important for a patient such as Trump, whose risk factors include his age and weight, and who may be contagious for days to come.

"I think he has to be assumed to be infectious," said William Schaffner, a professor of infectious diseases at Vanderbilt University's medical school.

"We need to know some details - how closely is he going to be monitored?" Schaffner said. "That's very important. The concern is, though he's feeling rather chipper, he could still crash."

In particular, he said, the president faces a potential hazard of developing cardiac problems that could disrupt his heart rhythm or breathing difficulty that could damage his lungs.

Schaffner said one of the metrics of improving health highlighted by the president's physician Monday - Trump's lack of a fever for more than 72 hours - could be a byproduct of the fever-suppressing qualities of dexamethasone.

One significant question Trump's doctors have not addressed is how long they plan to continue giving him the steroid and a combination of disease-fighting antibodies, said John Mellors, chief of the division of infectious diseases at the University of Pittsburgh school of medicine.

Mellors said some patients with symptoms similar to those described by the president's doctors achieve a full recovery. Others feel unwell for weeks or months, with symptoms that can include fatigue, body aches, shortness of breath, low-grade fever and mental fogginess.

In other cases, the virus can be suppressed temporarily but come back to cause major damage in the lungs or the heart, or by developing blood clots. Which trajectory any given patient takes "is all emerging" in terms of medical research findings.

The president probably is still contagious, experts said. Conley said doctors were using "advanced diagnostics" to determine "when it's safe to get around and be around people."

The real question, Marrazzo said, is why Trump returned.

"Is it a continued theatrical effort to assure us he is well enough to be discharged, or is it that they think he truly improved that quickly and can recover in the comfort of his own home?"