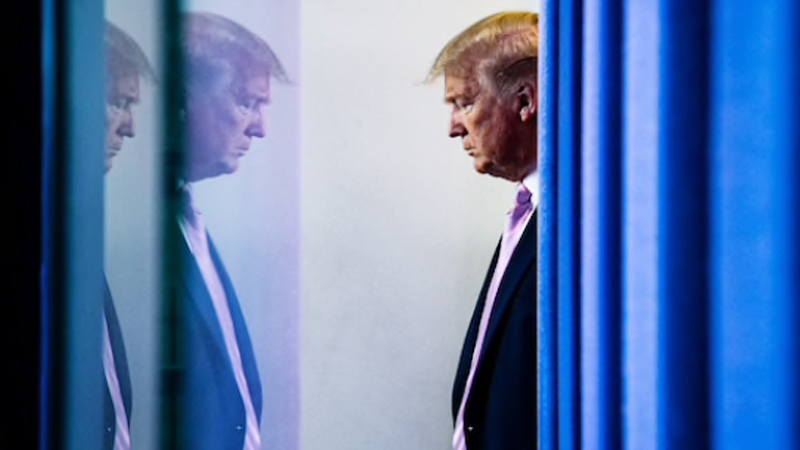 WASHINGTON - President Donald Trump's tweet Tuesday that he looks forward to next week's presidential debate alarmed some medical and public health experts, who warned that his coronavirus infection might still be contagious then and could endanger others.

A day after the president was discharged from a three-night hospital stay, during which he was put on an aggressive mix of treatments usually reserved for the most severe cases of covid-19, the disease caused by the novel coronavirus, he continued to project an image of being fully in charge and able to conduct all his regular activities.

Some outside health experts, however, said Trump's determination to attend the Oct. 15 debate is part of a pattern of recklessness that has defined his response to the pandemic, with the president and his aides not wearing masks or observing social distancing. At least 19 people on his staff or his campaign, or who attended recent White House events, have tested positive for the virus in the past week.

On Tuesday, White House physician Sean Conley continued to give upbeat reports on Trump's recovery, issuing a three-sentence memo saying the president "reports no symptoms" and has stable vital signs. "Overall, he continues to do extremely well," the memo said.

Neither Conley nor other White House officials have said how they will determine when it might be safe for Trump to go out in public - for his own health, or for others near him.

Several outside medical experts suggested that the president's actions indicate he is unchastened by his own experience contracting a virus that has killed more than 210,000 Americans - or by the spreading infections among his own staff and supporters.

Trump's removal of his mask moments after returning to the White House on Monday evening, and his subsequent assertion that he would appear at the debate "is irresponsible and reckless, and frankly that borders on malicious," said Michael Mina, a physician and assistant professor of epidemiology at Harvard's T.H. Chan School of Public Health.

"We should be throwing the kitchen sink at him, not just for treatment, but for ensuring that he is safe to be out in society and he is not imposing a risk to citizens of this country," Mina said.

Mina noted that the president's medical team has many ways to determine the status of his infection. Beyond administering the "PCR" test, considered the most definitive way of assessing whether someone has the virus, he said doctors could ask him to cough onto a petri dish to see whether the virus grows, swab his nose to culture the specimen, or administer antigen tests to see whether he has the virus's protein in his nose.

"The average American doesn't have tools to go through this," Mina said, "but the president is a very special person. We have tools to do this."

Guidelines from the federal Centers for Disease Control and Prevention recommend that covid-19 patients self-isolate for 10 days after their symptoms begin. The CDC also said they should not go out unless they have been fever-free for at least 24 hours, and their other symptoms should be improving.

Covid-19 patients who were seriously ill may need to stay isolated for as long as 20 days after their first symptoms, the guidelines say.

The CDC does not define a serious case, and Trump's doctors have withheld certain information that would provide a clearer picture of his medical condition - for instance how low his blood-oxygen levels dropped on two occasions or whether CT scans showed signs of pneumonia or lung damage.

If Trump developed symptoms late last week, the 10-day window would end before the debate.

Outside doctors debated whether the 10-day period for mild and moderate cases should apply to the president and whether it would be premature for him to go out in public next week.

Thomas File Jr., an Akron, Ohio, infectious-disease specialist and president of the Infectious Diseases Society of America, said that Summa Health, the company for which he works, generally follows the CDC guidelines. In all but the most serious cases, he said, "we would allow someone to go into the general public within 10 days of their symptoms appearing."

Georges Benjamin, executive director of the American Public Health Association, said most patients are no longer infectious after 10 to 14 days. But given the known timing of when Trump began feeling ill, "he'll be really close. All you have to do is be wrong within a day or two, and he could easily still be infected . . . it's going to be tight."

Rajesh Gandhi, an infectious-diseases physician at Massachusetts General Hospital and Harvard Medical School, said the CDC guidelines make sense but emphasized that covid-19 cases vary widely. About 80 percent of people have no symptoms or are mildly to moderately ill. Another 15% are hospitalized with serious cases like the president's, while the remaining 5% become critically ill, Gandhi said.

"I would reiterate on average that we are most cautious around the week or so after the onset of symptoms," Gandhi said.

Mina said the CDC guidelines are an average for a whole population, balancing risk of transmitting the virus with the desire for people to return to jobs and other aspects of their normal interactions.

"The president is in a position he should be serving as the absolute gold standard," he said, adding that Trump should get every possible method of testing, "given that he is the president, given that he goes to things that have so many people and have so many opportunities for transmission to occur."

Despite some apparently labored breathing by the president, experts saw little to be concerned about in Trump's brief appearance at the White House.

"What I saw was that he took a couple of deep breaths standing up there. He had just climbed up two flights with a mask on his face," said David Hager a specialist in pulmonary and critical-care medicine at Johns Hopkins. "I think he looks well."

Other doctors thought it might be premature for Trump to be making plans for his own health, simply because of the unpredictable course of the disease. John Zerlo, chief of the infectious-diseases division of Philadelphia-based Jefferson Health, said that any plans the president makes could change, depending on the progression of a disease that sometimes fools physicians and patients alike.

People who look and feel well can suddenly crash and need to be put on ventilators, Zerlo said. "If [the president's doctors] are not waiting at the ready to do that, they would be foolish. This infection is pretty capricious."

Kevin Sheth, a critical-care neurologist at Yale Medicine, said that the president should be monitored and tested for cognitive issues. "You want to survive the respiratory piece," he said, "but we know there are neurological complications." Those can include problems such as stroke and inflammation and longer-term cognitive changes.

"For somebody in a leadership position, that's what I'd be concerned about," Sheth said. "Clearly the virus in some patients is having effects on the brain."

Many public health officials and some physicians said they were angered by the symbolism of the president's tweets and actions since his diagnosis - and the damage they think he has inflicted on the safety messages they have been trying to convey to curb the nation's worst public health crisis in more than a century.

Hours before his discharge Monday, Trump tweeted: "Don't be afraid of Covid. Don't let it dominate your life."

His tweet also said, "I feel better than I did 20 years ago!" Outside physicians noted that the treatment Trump has been receiving includes dexamethasone, a steroid used to treat inflammation that has been shown to increase the survival rate among the sickest covid-19 patients. The drug's side effects can include insomnia, irritability or a feeling of euphoria.

"He really probably does feel a lot better," said Keith Hamilton, an infectious-disease specialist and associate professor of Clinical Medicine at the Perelman School of Medicine at the University of Pennsylvania. "Steroids make everyone feel better."

Several physicians said they had seen patients on the steroid become angry, confused or manic, but that such instances were rare and typically occurred when people received high doses.

Al Sommer, former dean of the Johns Hopkins Bloomberg School of Public Health, who has used the public health tools to wage global battles against diseases such as smallpox, said, the president is thinking short term, about his own recovery and reelection."But the pandemic has far from run its course."

Trump displays "an outrageous, irresponsible disregard of the advice of our best, most informed medical knowledge and public health practice," Sommer contended.

Peter Beilenson, director of Sacramento County's Department of Health Services, where coronavirus cases have seesawed, called the president's actions "totally irresponsible" as he described his own efforts to counter people's desire to do away with public health measures as the dangers seem to wane.

"This is a guy who got taxpayer-funded world's best treatment, acting as if it were no big deal and we should deal with it," Beilenson said. Beyond the 210,000 deaths, he noted, are countless patients known as long haulers - "people who have extensive problems, respiratory, cardiac, neurological, for months, maybe permanently. We don't know."

Josh Sharfstein, vice dean for public health practice and community engagement at the Johns Hopkins Bloomberg School of Public Health, said that even if the president wins his own battle against the virus, he is damaging Americans' well-being. The confusion he causes is to the benefit of the virus," Sharfstein said.