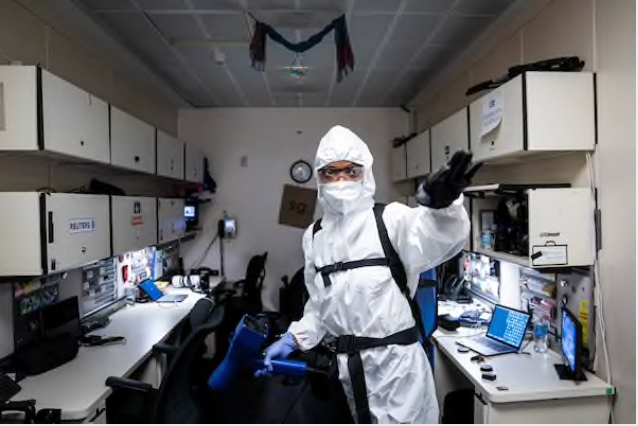 A member of the White House cleaning staff sanitizes in the press area on Monday. MUST CREDIT: Washington Post photo by Jabin Botsford

But the biggest source of resistance appeared to be Trump himself, who, despite having just come home from a three-night hospitalization, was defiant - lobbying to return immediately to work in the Oval Office, discussing an address to the nation as early as Tuesday evening and clamoring to get back on the campaign trail in the coming days.

At least nine White House employees have now tested positive for the virus, including senior adviser Stephen Miller, who got his positive result late Tuesday, a senior administration official said. Trump's aides, allies and advisers find themselves grappling with how to implement more safety measures and precautions without displeasing their boss, who continues to say - as he did in a tweet Monday - "Don't be afraid of Covid. Don't let it dominate your life."

In a video he recorded maskless from the White House south balcony Monday night, the president also falsely claimed that perhaps he was "immune" to the virus, said he felt "better than 20 years ago" and urged the public to "get out there."

The result is a bifurcated culture in Trump's White House and broader orbit, with informal and halting steps toward more rigorous health measures often undermined or upended by the president.

His team, for instance, tried to puzzle out if there was a way for him to safely return to the Oval Office on Tuesday but ultimately nixed the request, said two people familiar with the discussions, who like others spoke on the condition of anonymity to reveal internal deliberations.

"The White House really isn't doing anything you're supposed to be doing in these situations," said Angela Rasmussen, a virologist on the faculty of Columbia's Mailman School of Public Health.

Rasmussen added that while she agreed with Trump's call not succumb to fear, "we also shouldn't not take the virus seriously just because President Trump says he feels better and is flying around on Marine One and standing on the balcony like Evita."

On Monday, the White House Management Office sent out an email to senior staff who routinely interact with Trump, aimed at protecting both the president and his advisers. The memo, obtained by The Washington Post, urges staffers to "limit all foot traffic on the first floor of the West Wing as well as in the Residence" and says that "staff should only go to the Oval Office or the second floor Residence when they are requested and expected."

For staffers who do visit the Oval Office or the second floor of the residence, where Trump lives and holds meetings, and who expect to be within six feet of the president, the memo also requires that they wash their hands or use hand sanitizer before entering; remove any outer garments; and don personal protective equipment provided in an "Isolation Cart" - including a yellow gown, surgical mask, protective eyewear and gloves.

The White House has not changed its mask guidance and is still following Centers for Disease Control and Prevention guidelines that recommend, but do not require, wearing a mask. Several administration officials said that nearly everyone in the White House has been wearing a mask in recent days, including Trump's son-in-law and senior adviser Jared Kushner, who usually does not sport one.

Rapid coronavirus testing is still required for anyone in proximity to Trump, and the White House is also offering testing to members of the White House press corps who worry that they may have been exposed to the virus in the past week, an administration official said.

There has been minimal staffing in the White House since Trump's positive diagnosis, officials said.

"We feel comfortable working here, those of us who are still here," Alyssa Farah, the White House communications director, said in an interview with Fox News on Tuesday.

Privately, however, career administration officials and mid-level and junior staffers say they are scared - nervous about coming into work and wary of being the next to test positive.

Trump, meanwhile, has been pushing to give a national address of some sort, said two people familiar with his discussions. There were active negotiations Tuesday about the president speaking to the nation that night, although no plan ultimately emerged, one of those people added.

The White House Operations team, the White House Medical Unit and the chief of staff's office have sought to present Trump with a menu of things he can safely do until he's declared coronavirus-free, a senior administration official said.

Trump will probably continue to push out videos on social media and, at his request, increase his public visibility by a bit more each day - including offering updates on non-coronavirus topics as early as the end of this week, the official added.

Tuesday night, Trump was expected to hold a call with campaign volunteers in Georgia to urge them to continue working on his behalf, said someone familiar with his schedule.

The president wrote in a tweet Tuesday morning that he was looking forward to attending the second presidential debate - in Miami on Oct. 15 - and he has expressed eagerness to return to the campaign trail, according to several people familiar with his thinking.

Advisers are already planning campaign events with large crowds, including bus tours, airport hangar rallies, speeches at local centers and more, campaign officials said. The president's message in the final stretch, one Republican official involved in the campaign added, is likely to be: "You can beat this. It shouldn't stop your life."

Asked specifically what precautions Trump plans to take before appearing again on a debate stage with Democratic nominee Joe Biden - including whether he will do so only after testing negative - Trump campaign spokesman Tim Murtaugh responded in an email, "The president intends to debate in person."

And asked about Trump's campaign plans, including if heading back out in public will be contingent on a negative test, Murtaugh referred to the president's own words, writing, "The president is eager to get back to the campaign trail."

In private moments, Trump sometimes seems aware of the political problems posed by his handling of the coronavirus - both the pandemic roiling the nation and his personal cases. He recently told an adviser not to reveal their coronavirus diagnosis, as the Wall Street Journal first reported, but the adviser disclosed it anyway.

The president has also pressed his political advisers on how his hospitalization is playing politically. "How's it working out?" he asked, according to one person familiar with his calls.

Public polling in recent days has painted a long uphill climb for reelection, including a CNN/SSRS poll released Tuesday showing Trump falling to 16 points behind Biden, who leads 57 to 41%.

A GOP group working to elect Senate Republicans conducted polling over the weekend in four states - Colorado, Georgia, Montana and North Carolina - as Trump was hospitalized. The president's numbers dropped "significantly" in every state, falling by about five points in all four.

"The president is in real trouble," said one of the group's operatives, who is also close to the White House.

Many of Trump's allies and advisers see his response to his own illness as a missed opportunity. Some had hoped that he would emerge from his hospital stay slightly humbled, with a newfound display of seriousness and empathy, and would receive a boost of public sympathy.

But so far, that has not happened. Internal Republican polling has consistently shown that the coronavirus - and not taking it seriously enough - remains the president's electoral albatross. They believe it has caused the president to lose support among senior citizens and suburban women, both key voting blocs.

Several former administration officials said they were appalled at the president's conduct over the past few days, as well as the behavior of the people around him. One such official described Trump's decision to leave the hospital Sunday for a ride in his presidential limo, which required two Secret Service agents to be in the car with him, as "so monstrously wrong."

"In my lifetime, it was the most appalling thing I've seen a president do for a political stunt," the former official said, speaking on the condition of anonymity to share a candid opinion. "It's genuinely unhinged."

The approach in Trump's orbit stands in marked contrast to that in other parts of the White House. Vice President Mike Pence's chief of staff, Marc Short, has told his team to stay home until "further notice." And the East Wing, where Melania Trump works, has long taken more stringent precautions than White House officials have required.

Early in the pandemic, the first lady's staff all began working from home whenever possible, coming into the office only for events and travel - and even then with just a skeletal team, an administration official said. Everyone in the East Wing wore masks, and sometimes when doing events with her husband, Melania requested that no one personally staff her, to limit the number of aides at any given event, this official added.

After last week's outbreak, in which the first lady also tested positive, her chief of staff, Stephanie Grisham, again instructed all East Wing staffers to stay at home.

Some entire corridors of the West Wing were empty Tuesday. A number of advisers who said they'd worked in the White House in recent days did not return with Trump back in the building.

White House spokesman Judd Deere, in an emailed statement, said Trump will continue to receive "around-the-clock medical care," provided by the White House Medical Unit, which functions "out of a state-of-the-art clinic."

"The American people can rest assured with the president's return that the White House is taking every precaution necessary to protect not only him and the first family, but every staff member working on the complex to support the federal government's operations consistent with CDC guidelines and best practices," Deere said. "Physical access to the president will be significantly limited and appropriate PPE will be worn when near him."

But some have their doubts about whether the president and his team are really taking adequate precautions - and modeling good behavior for the nation. Referring to Trump's maskless appearance on the White House balcony Monday, Rasmussen said the president may not have conveyed the vigor and stamina he intended.

"I supposed the message he was trying to send was that he's super strong and defeated covid, but it was obvious even to me that he was gasping for breath, and that doesn't suggest he has, in fact, defeated covid," Rasmussen said. "It's really premature to be declaring victory, and it's also a really bad message to send."