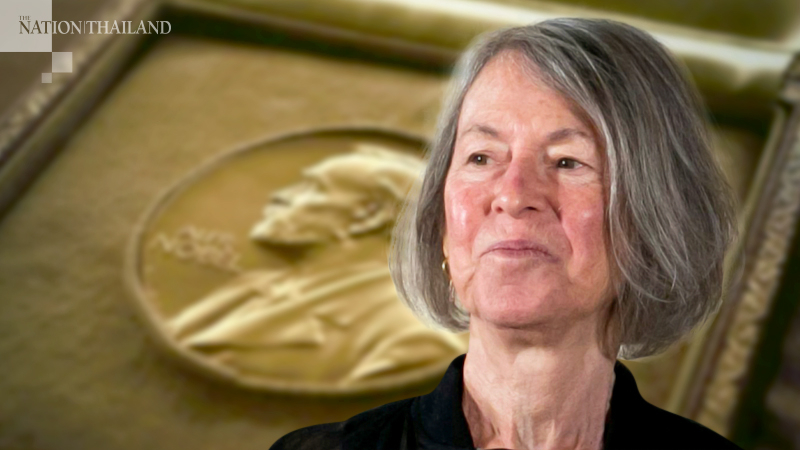 The writer, 77, born in New York, is one of the most celebrated poets in America. She has previously won a Pulitzer Prize, a National Book Award, a National Book Critics Circle Award and a Bollingen Prize. She was the poet laureate of the United States from 2003 to 2004.

Before today, only 15 women have ever won the Nobel Prize in literature, since it was first awarded in 1901.

Glück has published 12 collections of poetry and several collections of prose. In announcing the award, the judges said, "She seeks the universal, taking inspiration from classical motifs. . . . Glück's voice is unmistakable. It is candid and uncompromising, and it signals that this poet wants to be understood - but it is also a voice full of humor and biting wit.

Hearing the news that Glück had won the Nobel Prize, former U.S. Poet Laureate Robert Pinsky said, "Sometimes, the world gets these things right. And - I hope it's not indiscreet to say - a superb new book of poems will be coming from her soon."

Robert Casper, head of the Poetry and Literature Center at the Library of Congress, said, "I am so grateful to the Nobel Committee for awarding this year's prize to Louise Glück, whose charged, resonant poems are exemplars of the art - the reason she was appointed U.S. Poet Laureate by the Library of Congress in 2003. The Nobel prize will not only promote Glück's poems to the world but ensure they sit alongside the greatest literature in any language, from any time."

In an interview in 2012, Glück said, "I learned to read very early, very young, and my father was fond of writing doggerel verses. So the children, the two of us, we started writing books very early. He would print them out and we would illustrate them, and many times the text was in verse." She began writing poems in her early teens and began sending verses to poetry magazines. They were rejected, but, she said, "I persisted."

She once described her young self as "not a successful adolescent." She felt that other children considered her strange. "I became quite withdrawn, and then I became severely anorexic," she said. But she was determined to be an artist and a professor.

Success came for Glück in 1968 with the publication of her debut collection, "Firstborn."

In 1985, she won a National Book Critics Circle Award for "The Triumph of Achilles." She won a Pulitzer Prize in 1993 for "The Wild Iris," and a National Book Award in 2014 for "Faithful and Virtuous Night."

Her work is widely anthologized and the subject of considerable academic study. In 2012, Farrar, Straus and Giroux assembled her life's work in a collection titled simply "Poems 1962-2012." Reviewing the collection for The Washington Post, Steven Ratiner wrote, "Glück's 'Poems 1962-2012' is weighted with the dark matter of the human universe, invisible in our everyday interactions but at the core of our conscious experience. Though Glück lays bare the most intimate moments of longing and loss, these poems are not what we think of as confessional. They are more like the record of a shipwreck survivor trying to come to terms with the strain of isolation and the stark horizon of her island. Language is the castaway's only refuge."

"Staring blindly ahead, the expression of someone staring into utter darkness.

"And thinking - which meant, I remember, the attempts of the mind

"and at the same time suffused

"with contempt for the communal, the ordinary; forever

"consigned to solitude, the bleak solace of perception. . . ."

Today's announcement honoring one of the world's most beloved poets may help put the literature committee's past troubles behind it.

In 2017, the husband of one of the academy's members was accused of sexual assault and subsequently convicted of rape. That scandal led to a host of related accusations involving fraud, bad management and widespread misogyny. In the ensuing administrative battle, the permanent secretary of the academy was forced out, several members resigned, and the Nobel Foundation, which funds the award, demanded changes. Structural problems with the committee were considered so intractable that the 2018 literature prize was postponed till 2019.

But whatever improvements were made during that hiatus felt irrelevant almost as soon as the committee returned. Last year's literature prize was awarded to Peter Handke, a controversial Austrian writer known for his sympathy for the late Yugoslavia leader Slobodan Milosevic, who was accused of genocide. To many people around the world, honoring Handke felt like a shameful betrayal of the committee's ideals.

The only other living U.S. winner of the Nobel Prize in literature is the musician Bob Dylan, who received the award in 2016.

The winner of the 2020 Nobel Peace Prize will be announced Friday.

This year's Nobel ceremony in Stockholm has been canceled due to the ongoing pandemic.