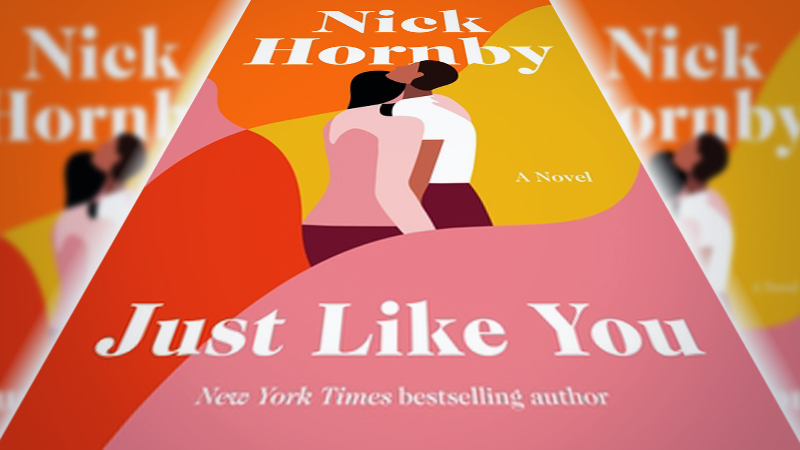 An ongoing critical debate is whether fiction featuring sympathetic characters can still qualify as "literary." Serious writers tend to gravitate toward the distasteful and dastardly; Jennifer Weiner has complained that female novelists with likable heroines have been unfairly dismissed as "chick lit." As the first to have his fiction dubbed "lad lit," British novelist Nick Hornby knows this critical syndrome well. Hornby's young male heroes might be a tad hapless - "High Fidelity" (and its movie iteration) preceded many of the failure-to-launch rom-coms that followed - but they have good hearts, and the love of a good woman goads them to mature.

Hornby himself has matured over his writing career, with his male and female protagonists getting older, getting married, having children, getting divorced, looking for love all over again. His ninth novel, "Just Like You," continues this trajectory. He writes insightfully about the daily disappointments, both professional and personal, that haunt ordinary lives.

Lucy is a separated school administrator and mother of two young boys in her early 40s. She's affable about her unreasonable expectations as she embarks on yet another blind date. "Imagine that this unlikely man loved fresh flowers and the films of Asghar Farhadi, that he preferred cities to the countryside, that he read fiction - proper fiction, not novels about terrorists and submarines - that, yes, he enjoyed both giving and receiving oral sex, that he was kind to her sons, that he was tall, dark, handsome, solvent, funny, clever, liberal, stimulating." Matchmaking friends introduce her to a famous novelist who checks at least some of these boxes. However, improbably and inconveniently, she finds herself drawn to Joseph, a 22-year-old who works the counter at the local butcher shop.

This is not our first fictional May-September romance, and we know the odds are against it succeeding, especially when it's the older woman being drawn to the young man she hires to babysit. In addition to the age difference, Joseph (don't call him Joe!) is Black, working class and lives with his mother. He has never read Shakespeare, whereas Lucy is clueless about the kind of club music that Joseph aspires to compose. As far back as "High Fidelity," published in 1995, an enduring theme of Hornby's work has been how essential shared aesthetic tastes should be in a relationship. Joseph proves to be a fast learner. Lucy realizes that "she thought she could get away with not being her quickest self, because she was older than him, but she couldn't. She could probably beat him in a quiz about Jane Austen, but that was about it."

Not every novelist excels at writing screenplays. The key to Hornby's success in both genres is his sharp dialogue, which manages to define character and introduce complicated questions while being breezy and congenial. It's not easy to portray an uneducated character without seeming patronizing, but Joseph's intelligence shines. This is no beer-guzzling bro: Despite his skill at video games that impresses Lucy's boys, Joseph is thoughtful, kind, hard-working, reliable, self-aware. Although he's more virile than Lucy's middle-aged suitor, it isn't the sex that wins her over. Indeed, their bond is more emotional, as Hornby shows through their companionable repartee. When Lucy bemoans the fact that "when you're fifty, I'll be seventy," Joe deadpans, "Yep. Whether we're together or not."

The romance in "Just Like You" is set during the lead-up to the Brexit vote and its immediate aftermath. Hornby parses out how the vote split along socioeconomic lines, with the referendum "giving groups of people who didn't like each other, or at least failed to comprehend each other, an opportunity to fight." He identifies many of the semaphores of British class that factored in that debate, which are, after all, squarely in his wheelhouse: not just political leanings but taste in sports, clothes, music and books.

Some of the Brexit references will translate better than others - and be more compelling - to an American audience, which may be puzzled by details like "looted stores in Wood Green." But Hornby's readers across the Atlantic will certainly get that he's using the referendum as a metaphor. Lucy "was uneasy about the future direction of the country, and she was also uneasy about the future of her relationship with Joseph." As they discuss her possibilities with the far more appropriate novelist, Joseph wryly reminds her: "It's not a choice between me and him. It's a choice between me, him, and every other single man in Britain. Or Europe, really. If you factor in like Skype and cheap flights."

Despite Joseph's vacillation on Brexit (one of the novel's running gags), the vote could go only one of two ways: in or out. About Lucy and Joseph's relationship, perhaps there's more wiggle room. Readers may think they know how the plot will resolve, but one of the pleasures of "Just Like You" is how skillfully Hornby takes his unlikely lovers, and the novel, to a conclusion that's both convincing and surprising.

Zeidner is the author of "Love Bomb" and other novels. Her book of criticism, "Who Says?: Mastering Point of View in Fiction," is forthcoming.