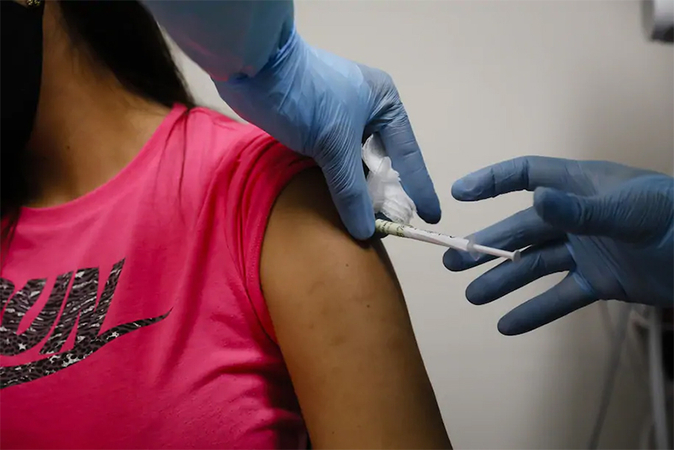 A health worker injects a volunteer during clinical trials for a coronavirus vaccine in Hollywood, Fla., in September. (Eva Marie Uzcategui/Bloomberg News)

State health officials are expressing frustration about a lack of federal financial support as they face orders to prepare to receive and distribute the first doses of a coronavirus vaccine by Nov. 15, even though one is not likely to be approved until later this year. The officials say they don't have enough money to pay for the enormous and complicated undertaking.

State officials have been planning in earnest in recent weeks to get shots into arms even though no one knows which vaccine will be authorized by the Food and Drug Administration, what special storage and handling may be required and how many doses each state will receive.

Despite those uncertainties, the Centers for Disease Control and Prevention is asking states to be prepared to "preposition" doses in key locations throughout the country. Officials want to move quickly once the FDA authorizes a vaccine and a CDC advisory panel issues recommendations on which populations should be vaccinated, according to a letter the CDC sent Monday to state preparedness and immunization officials.

As part of that effort, the CDC is asking states to provide by Tuesday critical information, including a list of each jurisdiction's top five sites capable of receiving and administering a vaccine that must be stored at ultracold temperatures of minus-70 Celsius (minus-94 Fahrenheit). The letter refers to the vaccine only as Vaccine A, but industry and health officials have identified it as Pfizer's candidate.

Pfizer chief executive Albert Bourla said Tuesday that "hundreds of thousands" of doses had already been produced and that a first look at the data would occur soon. Pfizer will not apply for any authorization of its vaccine sooner than the third week of November, when it will have sufficient safety data.

"We acknowledge that you are being asked to do unprecedented work," wrote Nancy Messonnier, director of the CDC's National Center for Immunization and Respiratory Diseases, which is leading the CDC's role in vaccine distribution. She added: "This is a new planning ask."

State officials say they have been trying to raise the issue with federal officials but have received little response.

"It is absolutely ridiculous that the administration, after spending $10 billion for a Warp Speed effort to develop a vaccine, has no interest in a similar investment in a Warp Speed campaign to get the vaccine to every American as quickly as possible after it is approved," said Michael Fraser, executive director of the Association of State and Territorial Health Officials.

Operation Warp Speed is the federal initiative, funded by more than $10 billion of taxpayer money, to fast-track development of coronavirus countermeasures.

"The now accelerated timeline underscores the need to address the issue of funding for state and territorial health agencies to make this all work," Fraser said. "There are many other costs that have no clear way to be paid for at this point."

Local officials still need to recruit thousands of people to staff vaccine clinics and enroll and train providers. They also have to ramp up information technology and data systems to track vaccine inventory and ordering to ensure people get the correct doses at the right times - most vaccines will require two shots - and to monitor for adverse events. They will need to develop locally tailored vaccination communications campaigns, too.

"States have received some funding, but it's not nearly enough" to support the scale, scope and speed that is needed, said Claire Hannan, executive director of the Association of Immunization Managers, whose members direct public health immunization programs throughout the country.

States and territories have received $200 million from the CDC to do planning, they said. In the next emergency supplemental funding package, they are asking Congress for at least $8 billion for coronavirus vaccination and $500 million for seasonal influenza vaccine operations, they said in a recent letter to congressional leaders.

Recruiting and training workers for coronavirus vaccination campaigns will cost at least $3 billion. Another $1.2 billion will be needed for cold supply chain management, $1 billion for arranging additional vaccination sites and $500 million for data information system upgrades.

Last month, CDC Director Robert Redfield testified before a congressional committee that roughly $6 billion is needed for the CDC to support states for coronavirus vaccine distribution, which will take place in phases, well into next year.

Natalie Baldassarre, a spokeswoman for the Department of Health and Human Services, CDC's parent agency, said the CDC has already sent $340 million to states to support flu and coronavirus vaccine planning and distribution. She said the most significant costs of delivering and administering a vaccine will be covered by the federal government and other sources. McKesson Corp., under contract with CDC, will ship vaccines and related supplies to sites where shots will be administered. Pharmacy and insurance reimbursement will cover additional costs, she said.

The CDC plans to send states an additional $140 million before the end of the year, said an HHS official who spoke on the condition of anonymity Thursday because an announcement is pending.

Without additional federal money, "it's kind of like setting up tent poles without having the tent," Nirav Shah, director of Maine's Center for Disease Control and Prevention, said during a recent call with reporters.

Even officials in conservative states say they can't distribute vaccines without federal help, especially as tens of millions of doses are expected to become widely available next spring and summer.

"As far as trying to reach all populations with an effective vaccine, that's going to be a real challenge," Thomas Dobbs, state health director for Mississippi, said on the same call.

The nation's governors, who are scheduled to speak Friday with HHS Secretary Alex Azar, have been seeking more federal dollars for months. The bipartisan National Governors Association sent a letter to the White House on Oct. 18 with questions about funding.

"Before you hand the baton to the governors, called 'administer the vaccine,' the governors need to know what resources? What funding? What is the timetable? What can they expect?" New York's Democratic governor, Andrew Cuomo, said during a conference call with reporters last week.

"We sent 35 questions to the president," said Cuomo, chairman of the governors group. "We have gotten no answer."

Michael Bars, a White House spokesman, said Thursday evening Cuomo has missed the White House's last 17 governors-only briefings, including a 75-minute vaccine briefing joined by nearly 50 governors and senior officials overseeing the vaccine development process. "It's unfortunate that the governor would engage in politically-motivated attacks that obstruct the federal planning process than meaningful collaboration to save lives," Bars said.

At the request of President Donald Trump, Bars said HHS Secretary Alex Azar and the Warp Speed leadership offered a meeting or call with Cuomo on Sunday but that Cuomo declined.

Cuomo's office did not immediately respond Thursday evening to a request for comment.

HHS officials said senior leaders of Warp Speed also briefed New York State Health Commissioner Howard A. Zucker last month. HHS is also working with the CDC to respond to the governors' questions. The CDC has already provided assistance to each jurisdiction, including near daily check-ins, weekly conference calls and, in some cases, on-site support, Baldassarre said. The CDC has also answered nearly 400 questions from jurisdictions, she said.

Administration officials have been seeking additional money from Congress, but bipartisan talks aimed at getting a deal on broad coronavirus relief have fallen apart. Prospects for reviving them are uncertain.

If Congress does not provide more funding, HHS is able to transfer money designated for other uses, such as hospital and small-provider relief, to help with vaccine distribution at the state level, according to a health-care industry source familiar with HHS funding decisions who spoke on the condition of anonymity to share internal discussions.