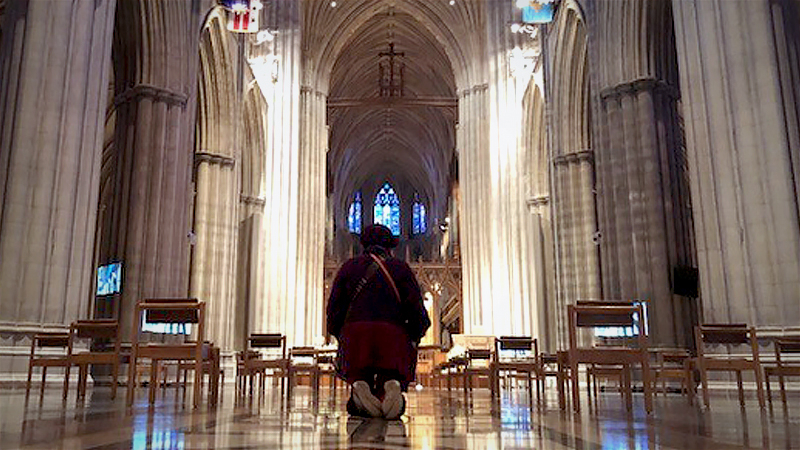 A worshipper approaches the altar at the Cathedral of Sts. Peter and Paul in Washington on Wednesday, Nov. 4, 2020. MUST CREDIT: Washington Post photo by Michelle Boorstein

In the morning, the 73-year-old walked from her home just to be near the place she calls holy, even though its cavernous, huge sanctuary was not yet open, to ask God whether the bright blue sky was an omen, "an alliance" and that President Donald Trump would be defeated. By afternoon she was on her knees, shuffling all the way up the long main aisle in a prayer of gratitude.

"I wanted to retrace my steps from four years ago," when Trump's election brought what the Colombian American said was a "chaotic energy." "I want to show gratitude for divine mercy. I am a Latino. A grandmother. These four years have been too hard. Gratitude that this president will leave, God willing, God willing, God willing. And leave us to peace and a means to rebuild."

A few miles to the north, Mary Suarez Hamm was saying a special prayer every hour with a group of other Catholics in hopes that Trump would remain the president and continue to pursue policies Hamm has devoted her life to - opposing abortion and same-sex marriage, and protecting religious legal rights.

Hamm, retired from running a pregnancy center and working for the region's archdiocese, took a break at 8:15 a.m. to attend Mass at Little Flower Parish in Bethesda, Md. She attends every day but by Wednesday. She was worried.

"What was on my mind was: Bring it to the good Lord. It's easy to be downtrodden when things don't go the way you want them to, but God knows what will happen," she said.

Not that she thinks her prayers are magic. "It's a silly old relationship between a child and a parent. When a parent says no, maybe it's not meant to me. It's for our best good."

Worry, fear and stress led some Americans to find themselves in sanctuaries of different kinds Wednesday as the outcome of the country's presidential race remained elusive. People prayed or meditated on potential outcomes. They looked for inner strength to deal with whatever happens. Although police in many U.S. cities had braced for a Wednesday of protests and even potential violence, instead the streets remained quiet and many were looking for spiritual guidance in that silence.

Cindy DeLano, a D.C. editor who has been in a church a few times in the past 30 years, was so anxious about the outcome and potential violence that she found herself in the cathedral Tuesday and Wednesday.

"This is how stressed I feel!" she said Wednesday afternoon on the cathedral's front steps, with her friend Hugh O'Neill.

She came for the fresh air and the walk and to step away from work, but DeLano, who is not religious, looked for the right plea in the sanctuary's quiet.

DeLano found comfort in the reaction she got on Facebook when she posted that she had been in the cathedral. Even people with whom she has not communicated well since Trump became president, she said, "liked" the post.

Since coronavirus quarantining began, most American houses of worship have been closed or have trimmed their hours. Many Catholic parishes have kept generally open hours during the day.

More than 1,000 people came to the cathedral on Tuesday and about 200 on Wednesday, said cathedral spokesman Kevin Eckstrom.

Across the Potomac River, Laraine Bennett was repeating a similar mantra at noon Mass from the back row at Blessed Sacrament in Alexandria, Va. The communications manager and writer did not want to say who she was supporting, but she said her focus and prayer is on unity and healing and peace in the country.

"It gives me peace to put it in God's hands. It gives a sense of peace to my soul," Bennett said. She said prayer is partly about discerning what is true - in a deep way, but also in a pragmatic way on a day when literal allegations of truth and falsehoods were flying.

"I pray every day to the Holy Spirit to help me see what is true. That I'd be enlightened," she said. "Sometimes things are confusing, and that's OK, too. Right now we just pray that we accept the situation as it is."

Acceptance was one of the primary things on the mind of one worshiper at St. Matthews Cathedral in downtown Washington. The woman, who emigrated from Peru and who declined to give her name, teared up as she talked about children separated from parents after traveling across the U.S. border - a trip she made herself as a young woman. Her voice shook at she motioned to boarded-up buildings as far as the eye could see. She blamed these situations on Trump.

"There's nothing I can do. There's nothing you can do. It's only God," she said on the steps after 1:20 p.m. Mass, which was attended by about 20 people. If Trump wins, she said, "we have to respect it. There must be some reason. Something we need to learn. It's not that God doesn't love us. We have to learn to live with one another."

O'Neill, 80, a retired lawyer and longtime Republican, said he felt calm inside the cathedral, even as uncertainty swirled. "The republic will survive," he said. "My only fear is we run out of money."