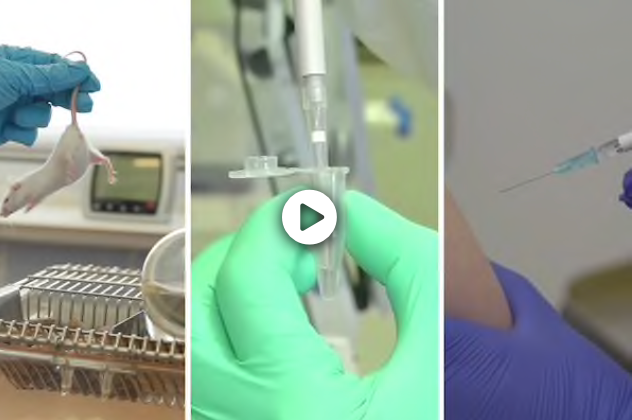 A front-runner coronavirus vaccine developed by drug giant Pfizer and German biotechnology firm BioNTech was more than 90% effective at protecting people compared with a placebo saline shot, according to an interim analysis by an independent data monitoring committee that met Sunday.

The early look at the ongoing trial provides a decisive initial glimpse of the real-world performance of one of the four coronavirus vaccines in the last stages of testing in the United States. It is the strongest signal yet that the unprecedented quest to develop a vaccine that could help bring the pandemic to an end might succeed, breaking every scientific speed record.

"I would say it's a historical moment. Something like this has never happened before. First of all, the world was faced with such a terrible situation, the pandemic, and being able in such a short time to go through what usually takes many years," Kathrin Jansen, head of vaccine research and development at Pfizer, said in an interview. "Hearing that at the interim analysis we are over 90% effective - it was almost stunning to hear."

In Pfizer's 44,000-person trial, there have so far been 94 cases of covid-19, the illness caused by the coronavirus, in people who were not previously infected. Fewer than nine of those cases were among people who received two shots of the vaccine, a strong signal of efficacy. The company's shares soared more than 13% in premarket trading.The data is not yet published or peer-reviewed.

"The results are really quite good, I mean extraordinary," said Anthony Fauci, director of the National Institute of Allergy and Infectious Diseases, adding that the results might bode well for a vaccine being developed by biotech firm Moderna and his institute that uses a similar technology, "which gives you hope we might even have two vaccines."

Fauci said he had spoken with Pfizer chief executive Albert Bourla about the results, but had not yet reviewed the individual data.

The rapid surge of coronavirus infections in the cooler months, while devastating for the country, means the trial is rushing toward completion faster than company executives anticipated. With more people being exposed to the virus amid the surge, testing the vaccine becomes easier - and faster.

The race for a vaccine had become inextricably tied to election-year politics, and for months, outside experts had worried that Pfizer's vaccine might be an "October surprise" pushed prematurely through the regulatory process. In the end, the data arrived nearly a week after the election, and shortly after the race was called for President-elect Joe Biden.

President Donald Trump, who had called Bourla to ask about the vaccine and previously accused regulators of a "political hit job" for slowing down a vaccine, celebrated the news. "STOCK MARKET UP BIG, VACCINE COMING SOON. REPORT 90% EFFECTIVE. SUCH GREAT NEWS!" Trump tweeted Monday morning.

The data committee noted no serious safety concerns. Jansen said the side-effect profile of the vaccine was similar to what was reported in an earlier study. That included pain at the injection site and fatigue, chills and fever - which occurred more frequently in younger trial participants than in adults over age 65.

Pfizer and BioNTech said they plan to submit an application for emergency authorization from the Food and Drug Administration after the third week of November, when they will have two months of safety follow-up data on half of the participants in their trial, along with data on their manufacturing process. The trial will continue until it reaches its endpoint of 164 cases of covid-19, which Jansen said could take a few weeks.

Vaccine development typically takes many years, even decades. But the coronavirus vaccines have been a rare success story in the response to the virus, able to move forward because of a flourishing of new vaccine technologies, a backbone of prior work on emerging pathogens and a mentality that rarely exists in the world of vaccine development - of governments and companies willing to devote nearly unlimited resources to make sure that a vaccine succeeds.

Outside experts said crucial details of the data need to be examined: How did the vaccine perform in high-risk populations, such as elderly people? Were the cases of disease mostly mild, or did the vaccine also prevent severe disease? Will the effectiveness hold up at this high level as the trial moves toward completion? How long will protection last? What do detailed safety data show?

Paul Offit, director of the Vaccine Education Center at Children's Hospital of Philadelphia, said the data look encouraging. The trial's faster-than-expected progress to 94 cases, he said, was "the upside of having a virus that's out of control."

David Benkeser, a biostatistician at Emory University Rollins School of Public Health, said in an email that he was still digesting the news.

"It looks to be an incredibly promising result," Benkeser wrote, noting that the two biggest questions are how long the effect lasts and how well the vaccine works to prevent severe cases of covid-19. "Both will still require more data to get a definitive answer, but for now, I think this is really good news."

Regulators had set a far lower bar for the minimum performance of a vaccine, requiring it be at least 50% effective. The FDA has also set forth a requirement for five severe cases of the disease in the placebo group, but Jansen said that to preserve the integrity of the trial, Pfizer's scientists remain blind to the details of the cases at this time.

The vaccine requires two doses, given three weeks apart. Pfizer and BioNTech are working around-the-clock to scale up production, in hopes of having 50 million doses - enough for 25 million people to receive both shots - by the end of the year, and 1.3 billion doses in 2021.

The vaccine uses a new technology never before deployed in an approved medical product. Each injection contains lipid nanoparticles - fat bubbles - that surround a strip of genetic material called messenger RNA. The genetic material carries the blueprint for the distinctive spiky protein that studs the coronavirus surface. After being injected into a person's arm, the fat capsule delivers its payload to the body's cells, and the messenger RNA instructs those cells to build the spike protein, effectively teaching the immune system how to recognize and block the coronavirus.

Pfizer's early signal is encouraging not just for messenger RNA, Fauci said, but as a proof of concept that vaccine candidates that present the spike protein - the approach being pursued by essentially all the major candidates - can succeed.

Pfizer, unlike its competitors, did not join Operation Warp Speed, the government initiative designed to erase the financial risk of vaccine and therapeutics development by providing funding to companies and helping coordinate the trials. Instead, Pfizer plowed $2 billion of its own money into the project and then struck a $1.95 billion contract with the U.S. government to provide 100 million doses, contingent on the vaccine being effective.

Its trial initially had a more aggressive design than other late-stage studies in the United States, allowing earlier and more frequent peeks at the data. That raised concern from outside scientists that the company might seek authorization of its vaccine when there were only 32 cases among participants.

The FDA shared those concerns, according to Jansen, and urged the company to wait to do its first data look until there were more cases. Pfizer scientists were initially concerned it would take too long to reach that milestone, particularly as it appeared the pandemic might be coming under control in late summer, thus depriving the study of potentially infected participants. But Pfizer scientists amended their protocol to wait to look at the data until they reached 62 cases as the virus began to surge, and they completed that paperwork last week.

"We saw that huge upswing, we realized that maybe we should listen and come back to the suggestion of the FDA to have more cases," Jansen said. "It just shows you the enormous uptick right now of the pandemic, that certainly it took us by surprise - how quickly it really went."

Once the independent data committee met Sunday, there were 94 cases in the trial - meaning the study is more than halfway done.