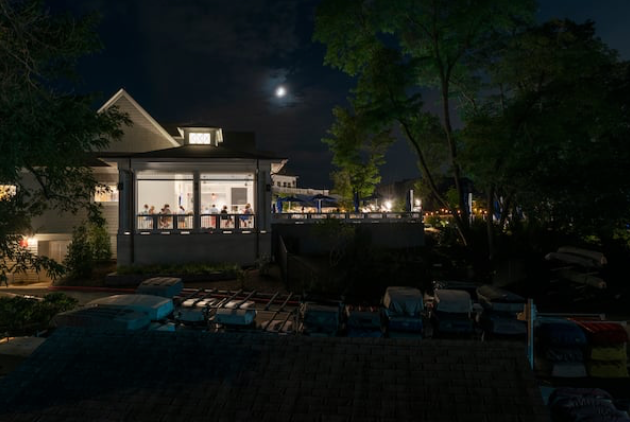 Members dine at a club in August in Annapolis, Md. MUST CREDIT: photo for The Washington Post by Craig Hudson.

A record-breaking surge in U.S. coronavirus cases is being driven to a significant degree by casual occasions that may feel deceptively safe, officials and scientists warn - dinner parties, game nights, sleepovers and carpools.

Many earlier coronavirus clusters were linked to nursing homes and crowded nightclubs. But public health officials nationwide say case investigations are increasingly leading them to small, private social gatherings. This behind-doors transmission trend reflects pandemic fatigue and widening social bubbles, experts say - and is particularly insidious because it is so difficult to police and likely to increase as temperatures drop and holidays approach.

The White House coronavirus task force has been urging states that are virus hot spots to curtail maskless get-togethers of family and friends, saying in reports that asymptomatic attendees "cause ongoing transmission, frequently infecting multiple people in a single gathering."

As new daily cases in the United States surpassed 145,000 on Wednesday, New York Democratic Gov. Andrew Cuomo announced a 10-person limit on gatherings in private homes, calling them a "great spreader." Similar restrictions have been imposed in states including Ohio, Utah, Connecticut and Colorado, where one recent cluster involved seven people infected while playing the dice game bunco, and Rhode Island, whose governor has pledged to fine violators. Oregon last week announced a "pause" in hard-hit counties on most groups larger than six people.

"Earlier in the outbreak, much of the growth in new daily cases was being driven by focal outbreaks - long-term care facilities, things of that nature," said Nirav Shah, director of the Center for Disease Control and Prevention in Maine, where cases have soared in the past two weeks. "Now, the kitchen table is a place of risk."

In Maine, as in other states, case investigators are seeing a new and related pattern: People who are infected list more close contacts than they did earlier, making the work of contact tracers more time-consuming and complicated. From March through September, the average number of contacts identified in Maine coronavirus investigations was 3.5. In October, that rose to 5.8.

"We've all gotten used to our bubbles, but I don't think we've really asked whether someone who's in our bubble is also in another person's bubble," Shah said. "People's bubbles are getting big enough to burst."

For months, the danger of large events has been a focus of state and local restrictions and of media coverage. Experts say less attention has been paid to the peril of small gatherings among family and friends, who may appear healthy and take similar precautions to avoid the virus.

But each additional contact increases a person's risk, said David Rubin, the director of PolicyLab at Children's Hospital of Philadelphia, which warned in a blog post last week that small indoor gatherings create "perfect conditions for a virus that can spread among people who are crowded into a poorly ventilated space." Rubin said a person's "bank" of risk should be even lower in winter because respiratory viruses like the coronavirus are more stable in dry, colder air.

"Often, they're with people we know really well," Rubin said of these gatherings. "We let our guard down."

Amber Calderon now knows she did that in October. The 24-year-old was excited to see some of her relatives for the first time in months at her nephew's birthday party - and she felt safe. The Conroe, Texas, resident knew her relatives wore masks and socially distanced in their day-to-day lives, she said, so she "trusted everyone."

About 25 people attended the party at a house, and Calderon said just one person wore a mask - her 81-year-old grandmother. Calderon started to feel ill a few days later, and she tested positive for the coronavirus on Oct. 20. Ten other people who were there also got sick, she said, including her grandmother.

"When I tested positive, I was mad at the situation I put myself in," Calderon said. "I should've never attended that party that day. None of us should have. I knew better."

In some places, the sheer volume of cases is so great that public health departments cannot connect the dots between them or discern whether a gathering attended by one infected person is the same as one reported by another.

In Minnesota, which reported a single-day record of nearly 6,000 cases on Sunday, the state's infectious-disease director, Kris Ehresmann, described what she called a "circular" problem: Social gatherings are leading to more community spread, and more spread is making those events ever riskier.

"It's getting more and more difficult to really tease out an interpretation of these data, because our community transmission just keeps going up," said Amy Westbrook, the public health director of St. Louis County, Minn.

In her county, she said, 30 percent of people who test positive say they don't know where they caught the virus, and a rapidly growing number haven't even spoken to overwhelmed contact tracers. Westbrook said she is stepping up public education efforts, but she knows residents are somewhat numb to messages about masks, hand-washing and staying home. And local law enforcement agencies, she said, have other matters to focus on than dinner parties.

Timothy McDonald, public health director in the Boston suburb of Needham, said he is considering a campaign centered on the idea of a "social budget," reminding residents that, according to guidance from the Centers for Disease Control and Prevention, they should avoid spending more than 15 minutes within six feet of most other people in a 24-hour period.

McDonald said he hopes that might help with an alarming widening of social groups and casual encounters, particularly among youths. In-school transmission is not the problem, he said. Instead, spread is happening after school - at play dates, sleepovers and, especially, socializing and carpooling connected to youth sports, he said.

"If your son or daughter is playing on a town soccer team and a travel soccer team, plus lacrosse, and is also on an ice hockey team, they're exposed and in close proximity to dozens of other kids," McDonald said. "Instead of counting the contacts on single digits, it's now getting to two or three dozen in some cases. And those are only people who are defined as close contacts."

Beyond gathering caps and public pleas, officials and experts say it is unclear what can be done to persuade pandemic-weary Americans to tighten their circles. Capacity limits in bars or mask requirements in stores can be enforced through fines and closures. Cracking down on baby showers or poker nights in private homes is another matter.

Connecticut Democratic Gov. Ned Lamont last week announced a 10-person limit on all indoor and outdoor gatherings, saying informal, private gatherings were "where we're seeing ignition taking off in terms of the infection rate." But he acknowledged that enforcement would be "on the honor system."

In neighboring Rhode Island, Democratic Gov. Gina Raimondo has for weeks admonished residents to shrink their bubbles and skip casual gatherings. Some people have reported 50 close contacts, she said at a briefing in mid-October. A high school slumber party involving at least 20 youths led to at least five infections and put hundreds of people in quarantine, she said as she announced a 10-person limit on social gatherings Oct. 30.

Raimondo said she would not hesitate to fine hosts of gatherings found to fuel transmission $500 for each person over the limit. No such fines have been issued yet, a state health department spokesman said Tuesday.

"It seems strange to wear your mask in your house with your best friend," Raimondo said. "It's human. It's understandable. It's got to stop."

Calderon now agrees. Her bout with covid-19, the disease caused by the coronavirus, involved a litany of symptoms: loss of taste and smell, devastating headaches, a cough, congestion, stomach pain, muscle aches, fatigue.

Calderon came out of it feeling lucky. She and all of her relatives recovered. Her grandmother was hospitalized for a week but is on the mend.

Calderon said she also came out of it with renewed resolve to remind others to be vigilant - and tell them "that the party they are about to have is not a good idea."

Everyone is tired of leading hemmed-in lives, Calderon said. But she views her experience as a painful reminder that "this virus spreads, and it spreads fast," she said. "And if you continue to ignore it, it will catch up to you, just like it did me."