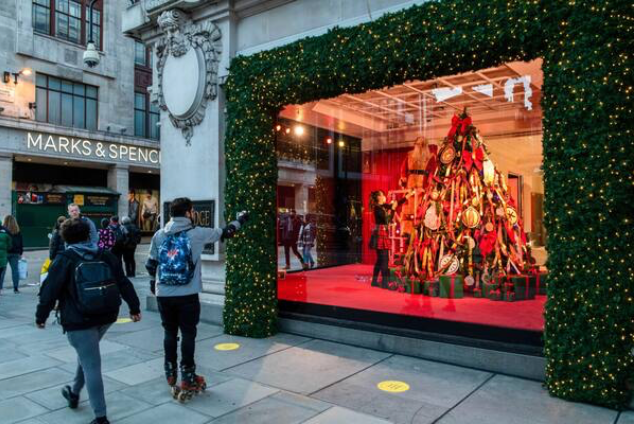 A passerby talks a photograph as an employee wearing a face mask dresses a Christmas tree in a Selfridges & Co Ltd. department store window in London on Nov. 4, 2020. MUST CREDIT: Bloomberg photo by Chris Ratcliffe.

Britain knows Christmas is coming when John Lewis Partnership launches its television ad. Selling the season as a time for acts of charity rather than any particular products, this year's edition will focus on food poverty and struggling parents.

Yet as the coronavirus continues to wreak havoc, it's the department store chain itself that's now a window on the festive period in a country that relies more on consumer spending than any of the big European economies.

With a partial lockdown in England closing all non-essential stores until at least Dec. 2, rescuing the next six weeks from covid-19 is critical for the U.K.'s financial well-being and a government beset by accusations that it can't get a grip on the pandemic.

Further disruption to what retailers call the "golden quarter" could be disastrous for an industry that's already been battered. November and December account for one of every five pounds of retail spending.

The slump during the U.K.'s spring lockdown precipitated the record decline in gross domestic product. It then contributed to most of the recovery in third quarter reported by the Office for National Statistics on Thursday.

The latest lockdown could cost retailers about 9 billion pounds ($12 billion), making what happens next month all the more important, said Kyle Monk, director of insight at the British Retail Consortium, or BRC. Household spending increases by 25% as Christmas comes. "If December is spent in lockdown it would be pretty catastrophic," Monk said.

As lights and decorations start to go up on shopping streets, no retailer knows the importance of Christmas more than John Lewis, the store of choice for many middle-class Britons. Last year about 14% of the partnership's annual sales came in the last five weeks of the year.

This year matters more than most for a 91-year-old company that's a microcosm of the economy's malaise, with job cuts, the accelerated shift to doing things online and the repurposing of staff and shops.

John Lewis announced plans on Nov. 4 to cut as many as 1,500 jobs at its head office, taking the total toll this year just under 4% of the workforce. Those cuts only add to the bloodletting on Britain's main streets, where close to 125,000 jobs were lost in just the first eight months of 2020, according to the Centre for Retail Research.

Sharon White, chairman of John Lewis, said in October when she revealed the partnership's turnaround strategy that hard decisions were needed to arrest a decline in profitability at one of the country's biggest private employers.

She announced the closure of eight out of 50 stores while permission from local authorities to convert nearly half of John Lewis's flagship store on London's Oxford Street into offices has been granted.

The company also canceled annual bonuses this year. It's the first time in more than 70 years that its 78,000 staff members who collectively own the partnership will receive no payout.

In addition to dealing with covid-19, Britain also faces the potential cost of leaving Europe's single market without a trade agreement in place. As Brexit talks drag on, retailers have had to activate contingency plans to try and mitigate any initial supply chain problems and disruption.

John Lewis said last year that it was prepared for a no-deal Brexit but warned it will have a "significant impact," particularly on fresh food supplies at its Waitrose grocery chain. The BRC said the industry would face 3 billion pounds of tariffs on food should the U.K. and EU fail to reach an accord.

But for now the attention is on avoiding a bad Christmas. A Deloitte survey in 2019 found British consumers were forecast to spend nearly 39% more on average compared to shoppers in the rest of Europe in the period.

"People underestimate just how geared the department store is towards the Christmas shopping period," said Ian Cheshire, chairman of Barclays U.K. and former chairman of department store group Debenhams Plc. "More than a year's profit is effectively made in that period."

John Lewis started its Christmas ads a little over a decade ago. The two-minute clip usually involves pairing music with a storyline evoking nostalgia for family and celebrations. This year's production will start running on social media on Friday and on television at the weekend.

In a sign of the struggles faced by households as well as retailers, it will include a direct appeal to support two charities helping people through the pandemic. It's called "Give a Little Love."