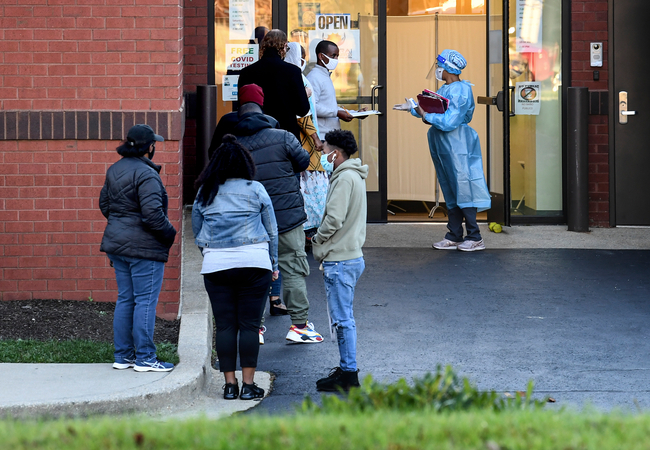 A line for coronavirus tests at the Angarai Testing Center in Silver Spring, Md., on Nov. 18. Experts say the winter is expected to bring a spike in virus cases much higher than seen the beginning of the pandemic. MUST CREDIT: Washington Post photo by Toni L. Sandys

A spike in coronavirus cases has brought the Washington, D.C., region to the brink of the toughest season of the pandemic so far, experts say, with the coming winter poised to eclipse the virus's impact in the spring.

"This is probably the worst" of the pandemic, Joshua Sharfstein, a former top FDA official and Johns Hopkins University public health professor, said of the next three months. "We're staring at the big battle with covid right now."

Already, the past two weeks brought record caseloads and a test positivity rate that climbed well past 5 percent and into territory that experts consider widespread community transmission of the virus.

Public health experts and hospital administrators say the abrupt rise in new cases is unlikely to abate in the next few weeks and couldforeshadow a more difficult December, followed by an even rougher January and a darker February.

"We're starting to see the spike that the rest of the country saw a week or two weeks ago. That steep climb is what's really worrying," said Neil Sehgal, an assistant professor of public health at the University of Maryland.

"At this point, there are not a lot of people in public health who think we're not going to spike dramatically," Sehgal said of the region. "We think everyone needs to hunker down and brace for what's going to be a precipitous increase."

Hospitals in some parts of the region already are nearing capacity, while others are beginning to execute contingency plans to care for the sick: setting up tents in parking lots, scrounging for staffers and reallocating resources.

The daily case rates in Maryland, D.C. and Virginia are better than the rates in at least 36 other states in the country, according to Friday's numbers, but public health experts say the region's recent rapid ascent in cases could put it on course to join some of the nation's hardest-hit areas.

Part of the surge was expected, as colder weather pushed people indoors into environments more hospitable to spreading the virus. But small social gatherings - places where people may feel lax about distancing or mask-wearing - have become a primary source of transmission, according to contact tracing data. Governors, county executives, and city leaders either have implemented new restrictions to curb the spread or have warned that they may do so.

The record numbers the region posted over the past few weeks suggest a large amount of the virus is coursing through the area undetected, experts said.

"Even if everybody immediately - today - complied with everything the governor said ... we'd still see several weeks of increases," said Clifford Mitchell, the director of Maryland's Environmental Health Bureau.

"Obviously, holidays have some impact, but honestly, much more of it has to do with everyday activity that people are doing," Mitchell said. "That's the thing that day after day is driving transmission."

Local leaders fear that residents are insufficiently cautious in the face of the high but not-yet-astronomical infection rates. Virginia Gov. Ralph Northam, a Democrat, emotionally pleaded with residents to take precautions this week and Maryland Gov. Larry Hogan, a Republican, earlier this month implored people to "just wear the damn mask."

Alexandria, Va., health officials urged residents who insist on gathering for the holidays to stay 10 feet apart from others, more than the Centers for Disease Control and Prevention's recommended six feet.

"You're going to have your mask off when you're eating," said Stephen Haering, the city's health director. "We also know that the holidays are a time when people are raising their voices. They are laughing. And that joviality is more likely to express the aerosolization of the virus."

"There's a great deal of fatigue. People are worn out. There's now a degree of complacency," said Theodore Delbridge, the executive director of the Maryland Institute for Emergency Medical Services System. His organization helps distribute patients and resources so that hospitals do not run out of space, and, he said, all the scenarios seem bleak.

"The models seem to agree that we're at the beginning of a wave that's going to affect us for a couple of months," he said. "Hospitals are near capacity this time of year anyway with seasonal illnesses."

In the District of Columbia, hospitals that once were more than one-third empty have steadily filled up in recent weeks; in the second week of November, more than 90 percent of the city's hospital beds were full, the first time during the entire pandemic that the city had reached this marker. The city Department of Health labeled that threshold an indicator that residents' activities may need to be restricted. D.C. Mayor Muriel Bowser, a Democrat, has said she will add restrictions in the weeks to come.

The doctors who run the city's hospitals and public health system are thinking ahead to the next step - what they will do if they run out of beds.

Health director LaQuandra Nesbitt said last week that personnel from the U.S. Army Corps of Engineers have walked through each hospital top-to-bottom, looking for spaces such as cafeterias and auditoriums that could be quickly transformed into covid units if the need were to arise.

If those surge spaces were to be filled, too, the city would start housing patients in the emergency beds in the Walter E. Washington Convention Center, which were set up months ago but have not been used.

In Maryland, the Baltimore Convention Center and two other outpatient hospitals had been converted to house coronavirus patients in the spring. They largely went unused then, but they have been kept intact as field hospitals in anticipation of the winter surge.

The coronavirus pandemic has caused such upheaval in the region's hospital network that 30-year-olds now are being admitted to the region's preeminent children's hospital to help lighten the load.

When other hospitals' intensive care units became overwhelmed in late spring, Children's National Hospital - which typically treats patients up to about age 21 - started accepting ambulances carrying extremely ill coronavirus patients up to age 30 to reduce the burden on neighboring hospitals. The children's hospital developed a list of its pediatricians who also have training in adult medicine and kept them on call to care for 20-somethings with covid-19.

Joelle Simpson, the hospital's chief of emergency medicine and its medical director for emergency preparedness, said that though she hopes that mask-wearing and hand-washing by the public will blunt the surges in winter illnesses such as the flu that normally fill beds at her hospital, the virus also has taken a significant toll on children's mental health. Psychiatric admissions have been rising, and Simpson fears they could spike this winter, too.

After scrambling for supplies in the spring, medical leaders in the region say they are well-stocked with all of the personal protective equipment, ventilators and other equipment they might need. But a new shortage has emerged: Staffing has become the most pressing concern at hospitals.

Already, doctors and pharmacy workers at Children's National have been asked to take on some of the tasks typically performed by nurses, who are in short supply across the nation. The Johns Hopkins health system tried to hire more than 100 nurses to help the hospital through the coming months, said Jennifer Abele, the chief medical officer at Sibley Memorial Hospital, which belongs to the Johns Hopkins system. But competition has been fierce as almost every hospital in the country recognizes that it needs more medical professionals to handle the virus. Many nurses have chosen to travel to regions that offer higher pay for their work.

"There's not a large excess number of nurses in the area that we can pull from," Abele said.

To prevent a nightmare scenario in which hospitals are overflowing, she said Sibley is considering voluntarily canceling elective and semi-elective procedures at the hospital, a measure the health department had ordered for all hospitals at the start of the pandemic to free up staff.

"Everyone is looking at their contingency plans. We need those staff members to take care of covid patients," Abele said.

At MedStar Washington Hospital Center, head of infectious diseases Glenn William Wortmann said nurses who typically work three to four shifts a week may be asked to work five or six shifts if the trajectory of the pandemic continues.

Howard University Hospital chief executive Anita Jenkins said the hospital can now test patients for coronavirus on-site and get results within hours instead of a week and has an abundant supply of the drug remdesivir, which seems to help some covid-19 patients.

With more knowledge of the virus, treatments have improved and the proportion of covid-19 patients requiring intensive care has dropped, and their stays in the hospital are shorter, she said. A student group donated iPads so that every coronavirus patient has a device to conduct FaceTime calls with family members without risking exposure.

Meanwhile, Jenkins said she hopes the end is in sight - Howard just ordered a new subzero freezer to hold upward of 1,000 vials of an eventual coronavirus vaccine.