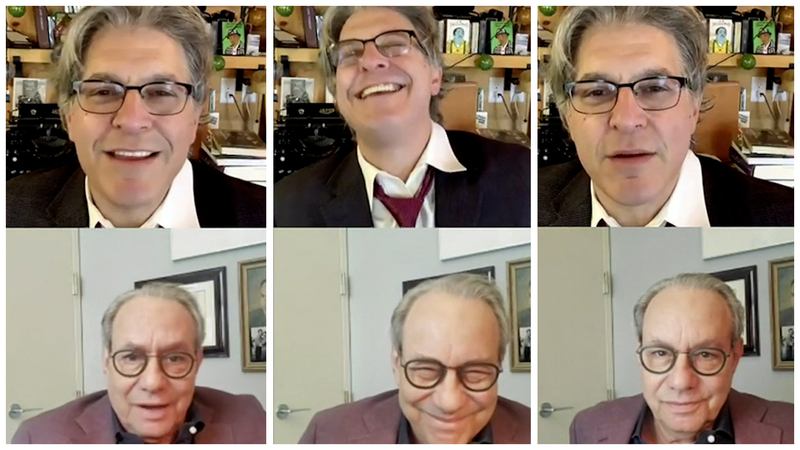 Like so many, national arts reporter Geoff Edgers has been grounded by the coronavirus. So every Friday, he hosts The Washington Post's first Instagram Live show from his barn in Massachusetts.

Recently, Edgers chatted with comedian Lewis Black. Here are excerpts from their conversation.

Q: We all know you from your comedy and from being on "The Daily Show." But we also know your temperament is important. I'd never met you before last night, when we got on the phone to set up this Instagram Live. You were having some technical problems, and ... I felt like your ire was directed at Instagram, right?

Q: You don't like putting pictures from your family events and connecting with old friends on Facebook?

A: I don't have enough time during the day to do the things before all of this. ... And it's like, you know, Bobo wants to be a friend. Well, sure. But I've never met you and I feel badly because I don't want to reject you. So now I got all these people writing to me and I'm going, "Well, how did this happen?"

Q: Is Donald Trump good or bad for a comedian? Does he help you or does he hurt you?

A: As I said about Sarah Palin and Tina Fey on "Saturday Night Live," it's difficult to satirize what's already satiric. It's so beyond not being funny, it's so really wrong at times, in a way morally inept. You have to wonder, wow, how did I end up standing onstage at times having to be the adult in this situation? You've turned me, the comic, into the adult. I'm not supposed to be the adult, the comic is the child.

Wow, you've got me riled up.

Q: Were you always angry?

A: Well, I always had a bit of anger, mostly sarcastic, but anger would kind of come to play at times. But you've got to realize, my family was born and raised Jewish. There was a lot of yelling. And my mother is still around and still yells about stuff at 102, so I always thought that anger was a form of love.

Q: That's a good T-shirt. I'll tell you something, ... I'm of the Jewish faith as well, and I grew up in a home of loud voices. My wife and I, it's really hard for us sometimes because we're in the house and we have the kids, and sometimes people just go haywire. But she feels uncomfortable, like the neighbors are going to hear. And I'm like, "This is how normal life goes." And there's something peaceful about getting it all out with a good argument.

A: Well, there is. And realizing that the yelling is not about the other person. That you love the other person so much that you're yelling at them, that you're telling them, "You know, I can yell at you because I care about you, and hopefully you understand that I'm not attacking you."

Q: When did you first tap into this anger as performance and knew it worked for you?

A: Early on, I started doing standup on the side as a kind of a hobby, and a lot of my early stuff was stories that were funny - about my sex life or my gym teacher teaching the health class. They were funny stories about things that had happened to me. And then as I started doing more, I would write a lot of it, and it had to do with being able to get something out there. I don't consider myself a political comic as much as a social commentator or a satirist, if you will.

Especially when I arrived in New York, the evolution began. I ran this room in the city with some friends, and we'd do a free show on Saturday nights at midnight. The whole week before, I'd rip stuff out of the newspapers that just irritated me, things that I thought were crazy, and I would go onstage and just pick the things up and yell, and then pick another thing up, and yell and yell and yell. ... A friend of mine said one night when I was performing, "You know, you're really angry. You should just go up there and yell the entire act and see what happens." And it was life-changing because I'm funniest when I'm angry.