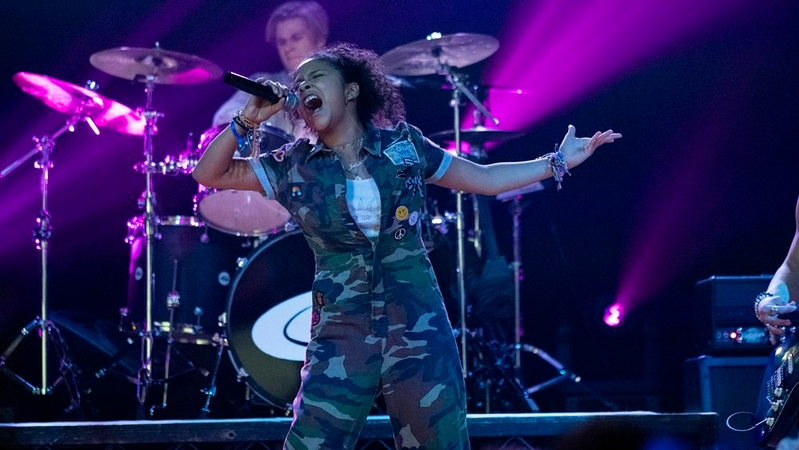 Madison Reyes as Julie in Netflix's "Julie and the Phantoms." MUST CREDIT: Eike Schroter/Netflix

The holidays will feel a bit different this year, but some traditions cannot be thwarted - like our annual viewing of "It's a Wonderful Life." Though your gatherings might be smaller than usual, there are a ton of family-friendly viewing options on streaming and a growing number of ways to make them a virtual group experience. We've rounded up some of our favorite kid-friendly TV and film picks below.

Consider this a triple dog dare. (Streams on Hulu Plus Live TV/TBS)

A toymaker who lost everything when his apprentice betrayed him is inspired by his granddaughter to return to the trade in this fantastical musical. It boasts an all-star cast - Forest Whitaker, Keegan-Michael Key, Anika Noni Rose, Hugh Bonneville and Phylicia Rashad - to boot. (Streams on Netflix)

Matthew A. Cherry's Oscar-winning short, about a little girl who helps her dad figure out how to do her hair, clocks in at just under seven minutes but will stay with you for much longer than that - especially if you've ever struggled to love your own hair. (Streams on YouTube)

We wouldn't let Remy, the rat chef at the center of this Oscar-winning animated film, cook our Thanksgiving dinner, but we'll gladly take his culinary tips while we wait for the musical conceived by TikTok users to materialize. (Streams on Disney Plus)

This tender and vivid Pixar/Disney film is rooted in the Mexican tradition of Día de los Muertos, the annual time when families honor their departed loved ones, so it's a great preamble to discussing grief with younger kids (or processing it at any age). The story revolves around a young aspiring musician who - in a quest to reverse his family's long-standing rule against music - finds himself among his ancestors in the Land of the Dead. (Streams on Disney Plus)

Force-sensitive families will enjoy this animated "Star Wars" series, which takes place between Episodes II and III of the Star Wars prequel saga and lets an intriguing heroine shine. (Streams on Disney Plus)

This is familiar territory for '80s kids, but why not let the younger generations see what movie magic looked like in the pre-CGI days? (Streams on HBO Max)

The marmalade-loving bear has a run-in with the law in this fun sequel, which features one of Hugh Grant's finest performances as villain Phoenix Buchanan. The first film isn't bad either. (Streams on Hulu Plus Live TV/TBS)

This animated PBS Kids show revolves around a young Alaska Native girl. The series won a Peabody Award this year for "helping to shift the ways that the next generation will think about Indigenous people and for giving native media-makers a central role in shaping their own representation." (Streams on PBS Kids)

This PBS special tackles a tough and timely subject through conversations with real kids and their parents, along with some good example-setting from fan-favorite characters including Arthur and Daniel Tiger. The broadcaster also offers some helpful resources for starting your own conversations at home. (Streams on PBS and YouTube)

Animal lovers of all ages will get into this docuseries following tween "Koala Whisperer" Izzy Bee, who takes care of cuddly marsupials with some help from her mother, a wildlife veterinarian, on Australia's Magnetic Island. (Streams on Netflix)

Miles Morales goes from Brooklyn teenager to superhero in this Oscar-winning animated film featuring an ensemble cast of voices (Shameik Moore, Hailee Steinfeld and Mahershala Ali among them) and, for what it's worth, a song that toddlers seem to love. (Streams on Netflix)

Is it even the holiday season if you don't watch Macaulay Culkin (and Catherine O'Hara!) in this blockbuster and its 1992 sequel? (Streams on Disney Plus)

The Peanuts gang has an eventful Thanksgiving feast in this holiday classic. (Streams on Apple TV Plus)

A teenager grieving the loss of her mom starts a band with three ghosts in this Netflix dramedy, which is far less morbid than it sounds - and perfect for musically inclined tweens/teens. (Streams on Netflix)

Andy's toys are back for another beautiful and emotional adventure in this Oscar winner. (Streams on Disney Plus)

Lin-Manuel Miranda cut some coarse language out of his Tony-winning musical so even the kids could learn about the ill-fated Founding Father and his American Dream. (Streams on Disney Plus)

This Canadian series, an adaptation of Lucy Maud Montgomery's famed children's novel, finds Anne of Green Gables at her pluckiest - and has a passionate fan base that bristled over the show's cancellation earlier this year. (Streams on Netflix)

The late Chadwick Boseman is the heart of this breathtaking and culturally significant Marvel film. (Streams on Disney Plus)

Every year - but especially this one - we can benefit from the life lessons in Frank Capra's beloved Christmas classic. (Streams on Hulu Plus Live TV/USA)