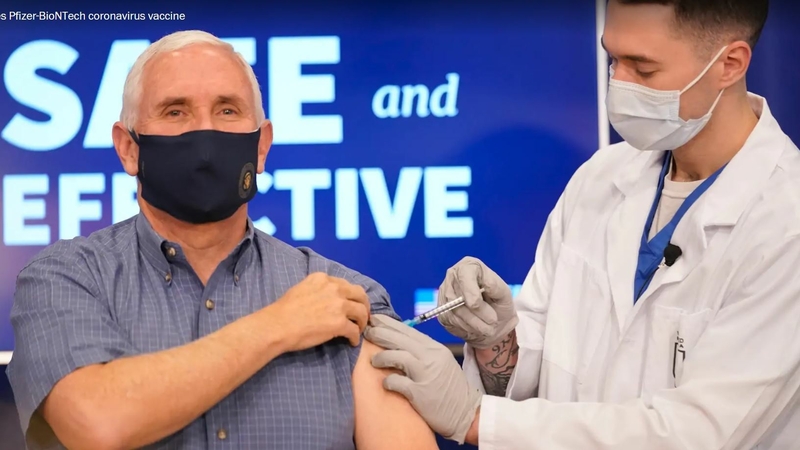 WASHINGTON - Vice President Mike Pence and second lady Karen Pence got the Pfizer-BioNTech vaccine at the White House on Friday, on live TV in an effort to vouch for the vaccine's safety and efficacy.

It comes as the Food and Drug Administration prepares to authorize a second coronavirus vaccine, developed by Moderna. An FDA panel deemed that vaccine to be highly effective in clinical trials, clearing the path to approval.

As reporters looked on, the Pences and Surgeon General Jerome Adams received shots of the vaccine in their arms, administered by Walter Reed National Military Medical Center staff, in a room in the White House complex.

"Great job," a masked Pence said after a small bandage was placed on his arm following the shot.

"Karen and I were more than happy to step forward," he said, adding that he wanted to build "confidence in the vaccine."

Pence touted the Trump administration's efforts to speed production of coronavirus vaccines, which he touted as a "medical miracle."

Distribution of vaccines, he said, is "the beginning of the end of the coronavirus pandemic."

Others on hand for the event included Anthony Fauci, the nation's top infectious-disease official, and Robert Redfield, director of the Centers for Disease Control and Prevention.

Several screens were set up in the room where the vaccinations took place. They showed messages including: "SAFE and EFFECTIVE" and "PROMISES MADE - OPERATION WARP SPEED - PROMISES KEPT."