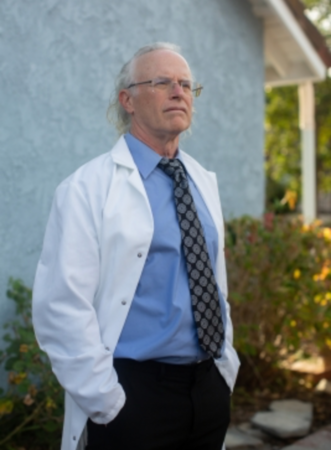 Mike Wasserman, past president of the California Association of Long Term Care Medicine, says the coronavirus vaccination process for such facilities is "a mess." MUST CREDIT: Photo for The Washington Post by Allison Zaucha

More than 3 million elderly and infirm residents of nursing homes and other long-term-care facilities may face delays in getting coronavirus vaccines as the facilities confront the difficult task of obtaining consent, which consumer advocates, operators and some health officials say should have been simplified and started earlier by the federal government.

Obtaining consent presents one of the toughest hurdles as officials mobilize to inoculate residents of these facilities, many of whom have dementia or Alzheimer's disease.

Facilities must track down relatives or attorneys in those cases, which could take days or weeks. In some instances, they may need to resolve disputes when family members disagree on whether their loved ones should receive a vaccine.

Even residents of sound mind may be anxious about a new vaccine and need time to weigh risks and benefits and consult with relatives.

Federal health officials gave top priority for vaccines to long-term-care residents and staff after outbreaks ravaged facilities, killing more than 113,000 residents and staff and accounting for more than a third of all U.S. covid-19 deaths. Health and Human Services Secretary Alex Azar recently said the government has the capacity to inoculate all long-term-care residents by Christmas. But the retail pharmacies administering the vaccines have indicated the process will likely take several months as a result of logistical and consent challenges that will require multiple visits to facilities. That process will be occurring over what is projected to be the deadliest period of the pandemic.

"It's a mess," said Mike Wasserman, medical director of a California facility and past president of the California Association of Long Term Care Medicine who has talked to other nursing homes about the rollout. "The federal government just hasn't provided good direction, and the direction keeps changing every day. And you get different stories from different people at different levels."

Operators of nursing homes and other long-term-care facilities have been scrambling to resolve the conflicting directions.

The government's partnership with Walgreens and CVS to distribute vaccines gave the companies discretion to secure permission however they wanted. The Centers for Disease Control and Prevention, which oversees that partnership, advised that verbal consent is enough.

But the pharmacies wanted more, imposing onerous consent rules far stricter than what nursing homes have used for seasonal flu shots, operators said. The pharmacies eased up after complaints.

Advocates say the Trump administration could have prevented this confusion had they instructed pharmacies at the outset that verbal permission was sufficient.

"We knew months ago, before any vaccine was approved, that these complex logistical issues were going to have to be dealt with once a vaccine was rolled out," said Mike Dark, a staff attorney with California Advocates for Nursing Home Reform. "If people who need the vaccine don't get it, we are going to see more deaths and more transmission."

Dark said the federal government could have taken steps to reach out to facilities ahead of the vaccinations with a coordinated education campaign and by encouraging safe family visits so residents could discuss the decisions in person.

CVS originally said it would require three hard-copy written consent forms from each resident or their proxy. They planned to mail the forms to the facilities, which some nursing home operators fretted hadn't arrived a week before the shots were to be administered. Homes and advocates complained that those requirements were burdensome, particularly when they would need to track down family members for signatures.

CVS now allows residents capable of decision-making to give verbal consent and will accept emailed consents from medical decision-makers for those who are not capable of giving permission, a spokesman said.

A Walgreens spokeswoman said forms are distributed to facilities several days ahead of vaccination clinics and can be marked to note verbal consent. Walgreens executive Ed Kaleta said last week that the pharmacy has become more flexible about what it will accept to indicate consent.

"A number of long-term facilities have said the consent form can be done orally or electronically, so for those facilities that are allowing that to occur, we're obviously complying with that because it is making it easier," he said during a webinar hosted by the Alliance for Health Policy.

"A couple of days before the clinic works fine if you are talking about people who are there in person and capable," Van Runkle said. "When you have to go outside to find someone and get their consent, a couple of days doesn't work. It would have been helpful to have more time to get consent."

HHS and Operation Warp Speed officials, who are overseeing the distribution of vaccines, did not answer questions about whether the federal government should have streamlined consent rules at the outset.

Several HHS officials said they had warned it would take time to obtain consent in long-term-care facilities, especially because they were hearing that some residents and employees were hesitant to get the vaccine, according to two senior administration officials who spoke on the condition of anonymity because they were not authorized to discuss the issue. They said they raised those concerns with Warp Speed officials and said there could have been high-level coordination ahead of the Food and Drug Administration's authorization of the Pfizer-BioNTech vaccine that would have enabled nursing homes to begin the process earlier.

"They could have started to get those consents in place sooner, but they would have needed to clear a fact sheet on the vaccine through FDA, to properly disclose the anticipated risks and benefits to the patients' families," he said.

But some officials cautioned that such a fact sheet would not have helped the process if the FDA's review of Pfizer's vaccine produced additional data and risks that were not yet known.

"FDA's staff were reviewing the terms of the authorization and Pfizer-BioNTech's fact sheets - which contain many important details that providers need, including risks providers must know prior to administering the vaccine to a patient - up until the time of authorization," said Stephanie Caccomo, an FDA spokeswoman. "This information absolutely must be accurate and complete - incomplete or outdated information would be detrimental to the delivery of vaccines to recipients."

Warp Speed officials declined to address the issue on the record. A senior Trump administration official said the rollout could have been even more chaotic had staff given out such fact sheets and then been forced to go back to relatives and residents after the FDA evaluation to describe new side effects.

"It was not a slam-dunk plan that I think some Monday morning quarterbackers are suggesting," said the official, who spoke on the condition of anonymity to talk candidly.

Vaccinations began at a handful of nursing homes last week, including in Florida and Ohio.

Gen. Gustave F. Perna, who oversees logistics for the federal vaccine distribution effort under Operation Warp Speed, said Wednesday that 1,100 of 70,000 facilities would receive vaccines by Monday before expanding to "thousands" a day. West Virginia, Florida, Ohio and Connecticut are the first states, he said.

Suzanne Messenger, West Virginia's long-term-care ombudsman, said some nursing home networks had to draw up their own consent forms - which are no longer necessary - while they were waiting for clearer guidance.

"It seems like folks had ample opportunity to have something, a skeleton consent form, so our facilities are able to roll out vaccines as soon as possible," Messenger said.

Some nursing home operators said they have found other ways to get things moving. Sunrise Senior Living, which operates 275 U.S. facilities, sent a survey to residents and family members to gauge interest in vaccines, finding that 92 percent wanted them when available.

David Grabowski, a Harvard Medical School professor who has been monitoring nursing homes during the pandemic, said early conversations about consent are important for vaccine rollouts.

Lines of communication between facilities and families have been disrupted with restricted visitations, which put greater demands on nursing home staff. Some patients able to make their own decisions may resist the vaccine if they feel they are being rushed into it.

"We shouldn't be figuring out how to fly the plane while we're in the air," he said. "We should have been doing it before takeoff."