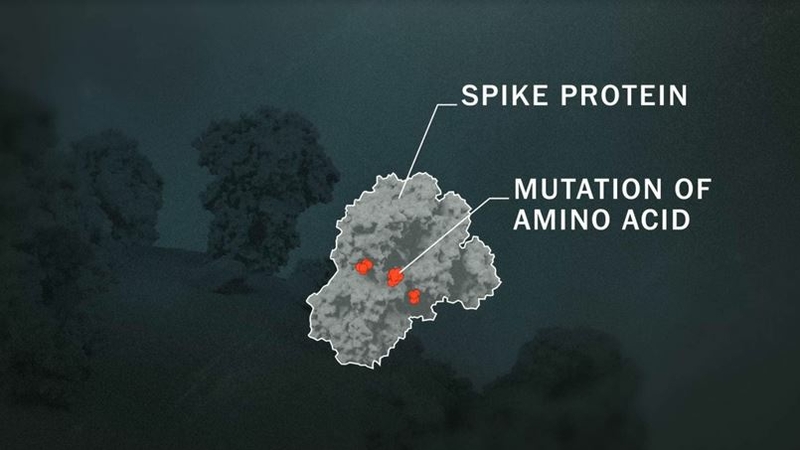 The highly contagious variant of the coronavirus first seen in the United Kingdom will become the dominant strain in the United States within about two months, its rapid spread heightening the urgency of getting people vaccinated, the Centers for Disease Control and Prevention predicted Friday in its most sobering warning yet about mutations in the virus.

In every scenario explored by the CDC, the U.K. strain, which British researchers estimate is roughly 50% more transmissible than the more common coronavirus strain, will account for a majority of cases in the United States by some point in March.

The CDC released modeling data to back up its forecast showing a rapid spike in infections linked to the U.K. strain. The agency said the emergence of these mutation-laden variants requires greater efforts to limit viral spread - immediately, even before the U.K. variant becomes commonplace.

So far, no variant is known to cause more severe illness, although more infections would inevitably mean a higher death toll overall, as the CDC made clear in an informational graphic released Friday: "MORE SPREAD - MORE CASES - MORE DEATHS," it said.

The CDC report "speaks to the urgency of getting vaccines out. It's now a race against the virus," said William Hanage, an epidemiologist at the Harvard T.H. Chan School of Public Health.

Scientists both in and out of government have stressed the need for the public to stick to proven methods of limiting viral spread, such as wearing a mask, social distancing, avoiding crowds and having good hand hygiene.

"We know what works and what to do," Jay Butler, the CDC deputy director for infectious diseases, said Friday.

The emergence of highly contagious variants has grabbed the full attention of scientists, who in recent weeks have warned that these mutations require closer surveillance. The CDC and its partners in private and academic laboratories are ramping up genomic sequencing efforts to gain better awareness of what is already circulating. Experts think there could be many variants containing mutations worth a closer look.

"This is a situation of concern. We are increasing our surveillance of emerging variants. This virus sometimes surprises us," Butler said.

Mutations could limit the efficacy of vaccines or therapeutic drugs such as monoclonal antibodies. Scientists believe vaccines will probably remain effective because they produce a robust immune system response, but such reassurances have been paired with cautionary notes about how much remains unknown.

The coronavirus mutations are not unexpected, because all viruses mutate. There are now several "variants of concern" receiving scrutiny, including ones identified first in South Africa and Brazil, and U.S. officials have said genomic surveillance is still ramping up here and that there may be other variants in circulation, not yet identified, that are enhancing transmission.

"We're going forward with the assumption that these three variants that we know about now are not going to be the only variants that emerge that are of concern to us," Greg Armstrong, head of the CDC's strain surveillance program, said Friday.

The CDC model suggests that the level of pain and suffering in late March, when the new variant is forecast to be dominant, depends on actions taken today to try to drive down infection rates.

The emergence in recent weeks of mutation-laden variants has alarmed the CDC and the scientific community. Because the threshold for herd immunity depends in part on how infectious a virus is, the emergence of a more transmissible strain can prolong efforts to crush a pandemic.

There has been particular scientific focus on the United Kingdom variant, known as B.1.1.7, which has been spreading with stunning speed in Britain, Denmark and Ireland and has been identified in dozens of countries. The United Kingdom conducts extensive genomic sequencing, and first detected the variant, which has 17 mutations, in September. But it was not flagged as a "variant of concern" until December, when it began circulating at explosive rates and quickly became dominant among the coronavirus infections in southern England.

Scientists say B.1.1.7 has mutations in the "receptor binding domain" of the virus, and this may be enhancing the ability of the virus to bind with cells in the human body. There is evidence it leads to higher viral loads, which in turn could boost the amount of virus that a person is shedding, or prolong the period in which someone can transmit the virus.

None of these mutations appears to change the basic mechanics of infection, and people should stick with common-sense measures to limit viral spread, said James Cutrell, an infectious-diseases physician at the University of Texas Southwestern Medical Center in Dallas.

"The same things that worked to protect you from this virus are going to work for these new variants as well," Cutrell said.

The CDC did not call for new government restrictions to crush the pandemic but emphasized the need to drive down infection rates.

It is unclear if the winter surge in the United States is at a peak, but the numbers are staggering, with more than 200,000 new infections confirmed every day on average.

This is not the first warning from the CDC about variants of the virus, but it is the first to offer a plausible timeline for when and to what degree the mutations seen recently could complicate efforts to end the pandemic.

It shows that vaccination, performed rapidly, is critical to crushing the curve of viral infections. Without vaccines, under one CDC scenario, the country could be dealing with even greater levels of infections in May than in January.

But if public health agencies can ramp up to 1 million vaccinations a day, the CDC model forecasts that daily new infections will decline in the next few months - even with the extra boost from the highly contagious U.K. variant. It has been identified in 12 states, the CDC said Friday, and the agency has informed officials nationwide that they should assume the variant is present in their state.

The CDC and unaffiliated scientists have said they see no evidence that this particular variant is driving the winter surge in cases. So far, it has been involved in fewer than 0.5% of infections nationwide, testing data suggests.

Friday's sobering CDC forecast is based on simple models and has limitations, the agency acknowledged.

The model looks at just the B.1.1.7 variant and does not consider the impact of other variants already discovered or not yet identified. The variants in South Africa and Brazil could prove to be even more problematic, though they have not been spotted so far in the United States. Researchers have noted the disastrous spike in cases in Manaus, Brazil, in recent weeks, despite the high percentage of the population believed to have been previously infected - a situation that raises suspicions, not confirmed by data, that some people who had recovered are becoming reinfected by the new strain.

The CDC model treats the United States as a single unit even though the virus is spreading at different rates locally and regionally. No one knows, even at the national level, the current "R," the reproduction number, of the common coronavirus variant. That's the number of people an infected person will infect, on average.

The CDC model used plausible reproduction rates of 1.1 (faster spread right now) and 0.9 (slower). The CDC then used British data to project that the U.K. variant is 50 percent more transmissible than the common variant. The model assumes that between 10 and 30% of the population has been infected already and recovered and now has immunity.

"It would be foolish to say that this is never going to end, and we might as well stop trying," the CDC's Butler said. "But there is reason to be concerned. We're not out of the woods on this pandemic yet. We need to continue to press ahead."