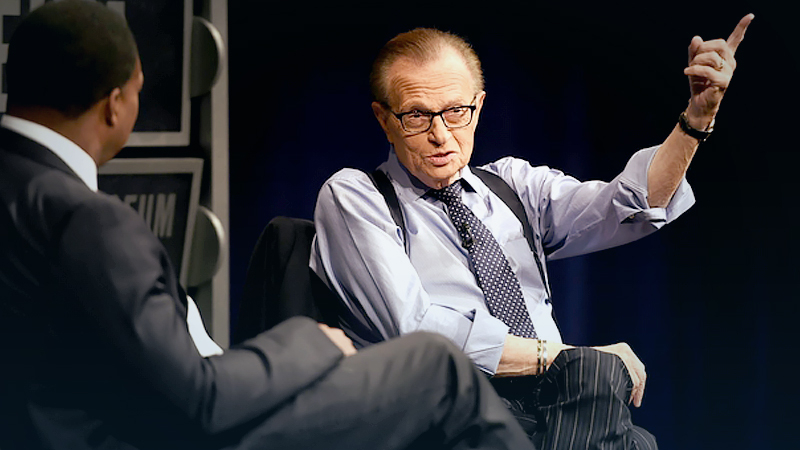 Larry King is interviewed by Leon Harris, left, at the Newseum in downtown Washington, D.C., for a special event, "A Life in Broadcasting: A Conversation With Larry King," in March 2015. Washington Post photo by Jonathan Newton

Larry King, the suspendered impresario of cable television whose popular CNN interview program - with its guest-friendly questions and conversational banter - was a premier safe haven for the famous and infamous to spill their secrets, hype their projects and soften their image, died Jan. 23 at a hospital in Los Angeles. He was 87.

Ora Media, the production company he co-founded, announced his death but did not provide a cause, according to the Associated Press. CNN reported earlier this month that King was hospitalized for complications from covid-19. The TV host, who was long beset by medical problems, such as diabetes and heart attacks, underwent an operation to remove early-stage lung cancer in 2017 and had a stroke in 2019.

In a career that included print and radio, King was best known for sitting behind a bulbous RCA microphone in the anchor chair of his prime-time CNN show "Larry King Live" from 1985 to 2010. He began as a Miami disc jockey in the late 1950s, wrote a USA Today column of stream-of-consciousness musings for nearly 20 years, and hosted a late-night Mutual Broadcasting System radio show that was beamed to more than 200 stations. He played himself in dozens of TV shows and movies.

CNN founder Ted Turner called King "the most famous interviewer in the world," which, at King's peak, was closer to understatement than hyperbole. His show, with its colored-dot map of the world in the background, garnered more than 1.5 million nightly viewers for segments with guests as varied as George H.W. Bush, Frank Sinatra, Snoop Dogg, Magic Johnson, Donald Trump, Michelle Obama, Lady Gaga, Moammar Gadhafi, the Dalai Lama and Marlon Brando, who, at once playful and bizarre, sang an old pop song and planted a kiss on King.

Others to appear included sex therapists, ufologists and Kermit the Frog and Miss Piggy. The Muppets donned suspenders in the host's honor.

Audiences responded to King's gentle probing, smoky baritone and casual manner. His CNN show served as an antidote to the network's otherwise round-the-clock breaking news coverage and partisan shoutfests. If other interview programs could resemble beds of nails, with "gotcha" inquisitions of newsmakers, King's show was a plush chaise longue.

New York Times columnist Maureen Dowd referred to him as "the resort area of American journalism, the media's Palm Springs, where politicians and other figures of controversy or celebrity can go to unwind, kick back and reflect."

King said he preferred to avoid reading background material on his guests in favor of a spontaneous approach of asking questions on the fly. He described himself as insatiably curious and said his favorite query was also the shortest: "Why?"

One of King's chief talents was his ability to put guests instantly at ease. He shunned the stiff suits favored by other newscasters for a jacketless look and rolled cuffs. His shoulders hunched as he leaned toward his guests. He seemed perpetually wide-eyed behind his windowpane glasses, keenly interested in what anyone sitting across from him had to say.

When nuclear physicist Edward Teller, a father of the hydrogen bomb, balked at an invitation to speak with King on his Mutual show, the host offered a deal: Stay for the first question and, if desired, leave afterward. At the interview, according to a 1980 account in People magazine, King asked Teller why high school students found physics so intimidating. Teller launched into a heartfelt response about the importance of scientific study - and then answered the rest of King's questions.

His impromptu methods caught some subjects off guard. When Vice President Dan Quayle appeared on "Larry King Live" in 1992, the conservative Republican politician stumbled into a question about abortion.

"What if your daughter grew up, had a problem, came to you with that problem all fathers fear, how would you deal with it?" King asked.

"Well, it is a hypothetical situation, and I hope I never do have to deal with it, but obviously I would counsel her and talk to her and support her on whatever decision she'd make," Quayle said.

"And if the decision was abortion, you'd support her?" King asked.

"I'd support my daughter," Quayle said.

Other times, King made news in spite of himself. Hosting Texas business magnate H. Ross Perot in 1992, King asked about his political prospects. On the spot, Perot announced it was possible he would make an independent bid for the presidency, immediately shaking up the campaign in which he would tap into voters' frustration with the two major political parties.

Speaking with Richard M. Nixon that same year, King asked the former president what he thought about as he drove past the Watergate apartment and office complex in Washington, the site of the political burglary and coverup that led to Nixon's resignation in 1974.

"Well, I've never been to the Watergate," Nixon replied. "Other people were in there, though, unfortunately."

Sometimes, King was caught flat-footed. He was upbraided by Jerry Seinfeld when he intimated that the comedian's extremely popular sitcom had been terminated by NBC, when in fact the actor-producer chose to end it.

When O.J. Simpson made a surprise call to King's show live on air in 1995, the day after the football star had been acquitted of murder charges, King's first question was, "Uh, how are you?"

While his style was purposely simple, King's line of inquiry occasionally had an unintentional comedic effect.

Initially thinking the Dalai Lama was a Muslim, he asked the Tibetan Buddhist leader: "Do you pray? And if so, who do you pray to?"

King said he was only posing the questions that members of his audience were too embarrassed to ask.

King, who collected Emmy and Peabody awards, conducted 50,000 interviews before leaving CNN in 2010 amid declining ratings. Into his 80s, he continued to appear on smaller cable outlets, notably the state-financed Russian television network RT, and on shows streamed online through a production company King founded with Mexican billionaire and telecom mogul Carlos Slim, Ora TV.

The son of Jewish immigrants from Russia, King was born Lawrence Harvey Zeiger in Brooklyn on Nov. 19, 1933. His father, who ran a bar and grill, died of a heart attack when Larry was a boy. His mother raised him and a younger brother. He later told New York magazine that he attributed their survival to government assistance, a belief that fueled his "undying liberalism."

After dropping out of high school, he held odd jobs before moving to Florida. At a radio station, he found work as a janitor but made clear his ambition to go on the air. He got his chance in 1957, when a disc jockey missed his shift. The station manager, advising a less Jewish-sounding name, christened him Larry King.

King soon started an interview program at Pumpernik's Deli, a well-known hangout for celebrities. Before long he had his own radio show, television program and a column in the Miami Herald. But by the end of the 1960s, he was gambling compulsively, on his fifth marriage and deeply in debt.

He allegedly stole $5,000 from industrialist Louis E. Wolfson, leading to grand larceny charges against King in 1971. The charges were eventually dropped because the statute of limitations had expired, but the host continued over the next several years to face problems over bad checks and debts exceeding $300,000.

He was fired from the radio station, and his lucrative connections to the TV and newspaper industries disintegrated. King worked as a publicist for a thoroughbred racetrack, among other jobs. In 1975, a sympathetic radio station manager gave him back his old job, and he slowly rebuilt his career, even as he filed for bankruptcy protection in 1978.

Around that time, Mutual radio lured King for a national late-night talk show based at studios in Arlington, Va. This incarnation of the "The Larry King Show," which featured show business and government newsmakers as well as offbeat personalities, ran from midnight to 5:30 a.m. (later cut back to 5) and drew a following that made him a star.

Soon, he was offered a column in the start-up newspaper USA Today, where he shared random, koanlike thoughts ("Jell-O is still one of the all-time great desserts," "I get a good feeling when I see a police officer on a horse") and occasional witticisms ("Is there a better feeling than having to sneeze and then sneezing?"). He ended his run in 2001.

Into his 80s, King maintained a loyal Twitter following numbering more than 2.4 million. Although he still used a flip phone, he mastered social media with tweets he tagged #ItsMy2Cents that featured a variety of underexplored ideas and questions: "Don't know why but corn tastes different off the cob," and "Of what possible use is the pinkie toe?"

King, known for his wandering eye and monumental self-regard, had a complicated private life. He was married eight times ("I love the chase!" he once declared), including twice to former Playboy bunny Alene Akins. His last marriage was to singer Shawn Southwick.

Two of his children from Akins died, Andy King in July 2020 after a heart attack and Chaia King of lung cancer in August 2020. He had three other children, including a son, Larry Jr., from Annette Kaye, and two sons, Chance and Cannon, from Southwick. A complete list of survivors was not immediately available.

King, who wrote several memoirs, was a natural raconteur, a skill he said he developed in childhood on the stoops of Brooklyn. Many of his stories, often involving sexual invitations, strained credulity. Some were outright false.

For years, King spoke in detail of his friendship as a teenager with a fellow Brooklyn native, the baseball Hall of Famer Sandy Koufax, and a bet that led to a trip in New Haven, Conn., and some high jinks in that college town. But Koufax told The Washington Post in 1991 that he had never been to New Haven and did not meet King until both were adults. King admitted that the story was a fabrication aimed to aggrandize the sorrowful childhood of Larry Zeiger.

"I'm a funny storyteller," King told The Post. "Now, that answers what I am. Who I am? It's a question I've never asked."

"Then how about Larry Zeiger? Who was he?" a reporter asked.

"He was an acne-faced, overweight, Jewish kid whose father died, who was on welfare, whose mother spoiled him. And then, in the course of his life, in his mid-20s, he became Larry King," he said.

"And who is Larry King?" he was asked.

"All the things that Larry Zeiger never was," he said.

"So who was telling that story . . . Larry Zeiger or Larry King?"

"Probably Larry Zeiger," he said. "Larry King wouldn't have to exaggerate anything."