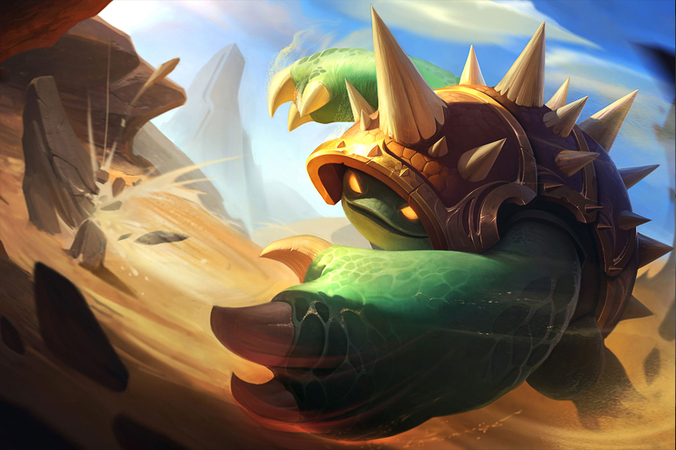 When I asked my five-person "League of Legends" team, composed of strangers playing on PC, if anyone was trying out "Wild Rift," one of them derisively replied, "Who would want to play 'League' on their phone?"

The answer, it turns out, is millions. The day of release, App Annie reported 6 million downloads of "League of Legends: Wild Rift" across the United States, Brazil and Mexico, growing the global total to 32 million downloads. The mobile game is already available in Southeast Asia and Europe, with other regions coming soon.

"Wild Rift" takes the gameplay of "League of Legends" - five players versus five players, fighting and strategizing to destroy the enemy's nexus - and modifies it to make sense on mobile. "Wild Rift" moves at a faster pace than "League" on PC, games demand less time and the size of the map shrank to fit smaller screens.

The reluctance from some PC players is understandable, however. Since its inception in 2009, "League of Legends" has both captivated esports fans and induced a sense of inferiority in its more amateur players stuck in the lower competitive ranks of bronze, silver and gold. Few League players reach the highest tier of Challenger, and even fewer can appear on world championship stages each year in Beijing or Paris displaying their speedy reaction times.

"League" is a game well-informed by its competitive play and what it's supposed to look like at the highest level - there is a valley of difference between a fun, messy game of All Random All Mid (ARAM) and professional plays. But for many League players, part of the fun is striving to get there. And to those hardcore fans, they might have a visceral reaction to hearing about "Wild Rift," which runs on iOS and Android, with console support in the works. After all, mobile gaming understandably means having to play on a smaller screen, using touch controls to drag one's champion around and other compromises to the full "League" experience.

But while those changes might be disliked by hardcore purists, "Wild Rift" adds up to a satisfying experience for many. The simpler version of "League" appears to be attracting a new set of players, those who quit "League" on PC, those who never had a gaming PC, those who never learned "League" because it was too information-dense, those who play other battle arena games similar to "League" and more.

In other words, "Wild Rift" seems to be injecting new life into a community that has grown pretty insular.

"League of Legends" averaged 8 million daily users in 2019, and that number remains flat this year. Without "Wild Rift," "Teamfight Tactics" and the other games that Riot has added to its recent portfolio, "League" might have continued to plateau. But Riot specializes in attracting fans to new intellectual property and supporting those games as esports. It has competitive plans for "Wild Rift" too, with tournaments already popping up in Southeast Asia and Europe. And the game maintains key features that pro players could excel at: killing minions to get power-ups, complicated champions like Vayne who rolls around and turns invisible, and three stages of the game, including a final stage for teams to face off.

Still, with limited support for controllers (I tried connecting a PS5, PS4 and an Xbox Series X controller to my iPhone and my Android phone, and none of them worked except for the share button on the PS4, which allowed me to capture footage and screenshots), "Wild Rift" is dependent on players learning its touch controls. It took me a good 10 games to get the hang of dragging to move my champion, aiming skill shots and attacking in the right direction. In early games, I would drag my champion backwards by accident and get caught in enemy attacks and die, which was frustrating, knowing that I would've survived if I just had a little more control.

After practice, however, I've started to play "Wild Rift's" competitive ranked mode and found it's easy to be consistent in games, push objectives forward and have a positive impact on the team. Double kills and even triple kills are sometimes simple to pull off, when enemy players are still trying to figure out how to run away. With the smaller map, ganks, the act of popping into a different lane to help kill the enemy, are a lot easier to execute. A common strategy in effective rank games is to group up and start deleting enemy champions one at a time. It's a plan that works well on PC too, but it feels even more oppressive on mobile, if one team is always sticking together and the other is scattered and uncoordinated.

"Wild Rift" also cleans up one of the more annoying reoccurrences in "League": online harassment. While I've seen players still curse each other out over taking a role someone else wanted, those instances are rare, as it's pretty tough to type while playing. "Wild Rift" requires a lot of hands-on tapping, and that means less time to say something mean in chat. There are pings players can use to signal that an enemy is missing, to retreat, that the player is on their way, or to engage in a fight. The game's narrator helpfully calls out "On my way!" repeatedly when the ping is pressed, and even though players tend to spam these pings, I haven't seen anyone complain that it's annoying.

With reduced online harassment, "Wild Rift" is a much more beginner-friendly game. In the games where I was trying out off-roles and champions I don't usually play, like Master Yi in jungle, I died multiple times and was a hindrance to my team - nobody said anything. On PC, it's common to see a player who has died 10 times get insulted by various teammates for being "useless" or intentionally losing.

Meanwhile, voice chat in game sounds crisp and smooth, but I had to switch to headphones to talk to my teammate, as my hand placement on the controls naturally blocked my phone mic and I sounded muffled and far away.

At the same time, "Wild Rift" still lacks a few features that could be helpful for newbies. Champion skills don't have descriptions once a game starts, so a new player can't read up on what each skill is while playing on the fly. Players aren't taught in the tutorial which champions are best for certain roles, nor what they should do after they destroy the enemy's first turret.

Ranked mode also opens up to players at level 10, which is fairly early, compared to League on PC where people unlock ranked mode after level 30 and owning 20 champions. The result is that the current ranked mode for "Wild Rift" includes a chaotic mix of people of all skill levels from beginner to advanced, even some people who are still learning the game's basics.

"Wild Rift" takes the same approach to free-to-play as PC "League" does: Players can earn in-game cosmetics through time spent on the game, and they can avoid spending real money if they'd like. There are no ads and no constant reminders to spend money on the game. There's no way to pay to win, and spending real money only has benefits such as better looking outfits and unlocking champions faster. I spent around $20 on the game, $13 to buy my champion a nice Lunar New Year themed skin and $7 to skip ahead and get Miss Fortune, my favorite champion.

That separates "Wild Rift" from many rival free-to-play mobile games, which often lure players to sink money with the promise of better lottery rewards and sometimes even run ads on top of that for additional revenue. In fact, Wild Rift's approach to mobile gaming feels more like a premium, paid product, such as a $4 app in the store, but without the paywall.

And it's that slick combination of a seemingly premium product that's also free-to-play that is drawing in new fans to "League of Legends," a nearly 12-year-old game and now a robust, growing franchise.