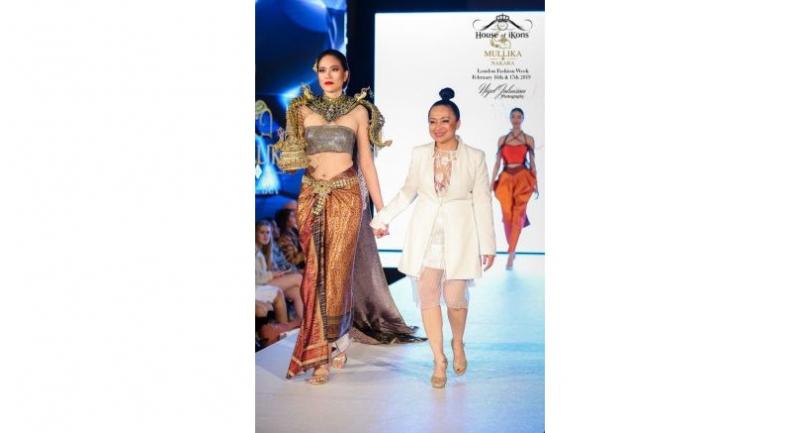 THAILAND made its presence felt in the UK last month as our very own designer Mullika Upatham celebrated the Kingdom’s traditions, Thai silk and Thai boxing in the opening show of London Fashion Week’s House of iKons.

Selected as a representative of the Culture Ministry, the London-based designer showcased gorgeous Thai silk fabric from Pak Thong Chai district in Nakhon Ratchasima province in a tribute to Thao Suranari – Ya Mo as she is known locally – the wife of the deputy governor of Nakhon Ratchasima (Khorat) who is credited with chasing off would-be Lao conquerers when they sought to take over the province in 1826. Her bravery and patriotism led to the complete defeat of King Anouvong and the destruction of his capital Vientiane.

An honours graduate in Fashion and Creative Design from the Faculty of Fine and Applied Arts, Chulalongkorn University, Mullika worked as a textile designer for Jim Thompson before moving to live permanently in England 20 years ago. She is also the licensed organiser of Thai kick boxing in the UK.
Her latest collection under the label Mullika Nagara wowed both Thai and foreign audiences at the show with superstar Khemanit “Pancake” Jamikorn putting on a turn as honorary model.
“My inspiration for this collection that combines the old style of boxing with a contemporary sporty look was Ya Mo of Khorat (Nakhon Ratchasima). History indicates that she had not only studied fencing but was also proficient in Thai boxing,” she says.
The designer used silks woven in the traditional way, adding graphics derived from murals about the Naga, the mythical serpent in Thai literature, and ancient Thai alphabet.

“I began the project about nine months ago. The silk used in the collection is beautifully hand woven with a refined and charming mudmee pattern. Thai silk is elegant and has a timeless quality but I added the flexibility of fabrics used in sportswear to the trousers that look like the traditional jongkraben to make them more wearable in everyday life.”
The makeup and hairstyles also followed the Ya Mo inspiration under the close supervision of veteran makeup artist Phumipat Kimhoo and stylist Udomrat Klabmuang.

“Working on the international stage was an amazing experience, from the moment we arrived at the airport to the fashion venue. As a Thai, I also admire our historic heroine. So, I interpreted the makeup using her fierce and strong look with black smoky eagle eyes, contoured the face with intense brush colour and finished with nude lipstick. The hair was tied into a bun but twisted with braids,” Phumipat says.

“I was so honoured to be part of the London Fashion Week, and the opening of this year’s House of iKons show and have received amazing support from the Mullika Nakara team in Thailand, the Thai government and friends and colleagues from the world of fashion, particularly a London-based Thai artist, Jade Chorkularb, who helped creating wonderful illustration for my designs,” Mullika adds. “I strongly believe in Thai boxing and are convinced that the powerful energy of the sport that can be developed into fashion design.”
Mullika will now showcase the collection in Frankfurt, Germany.