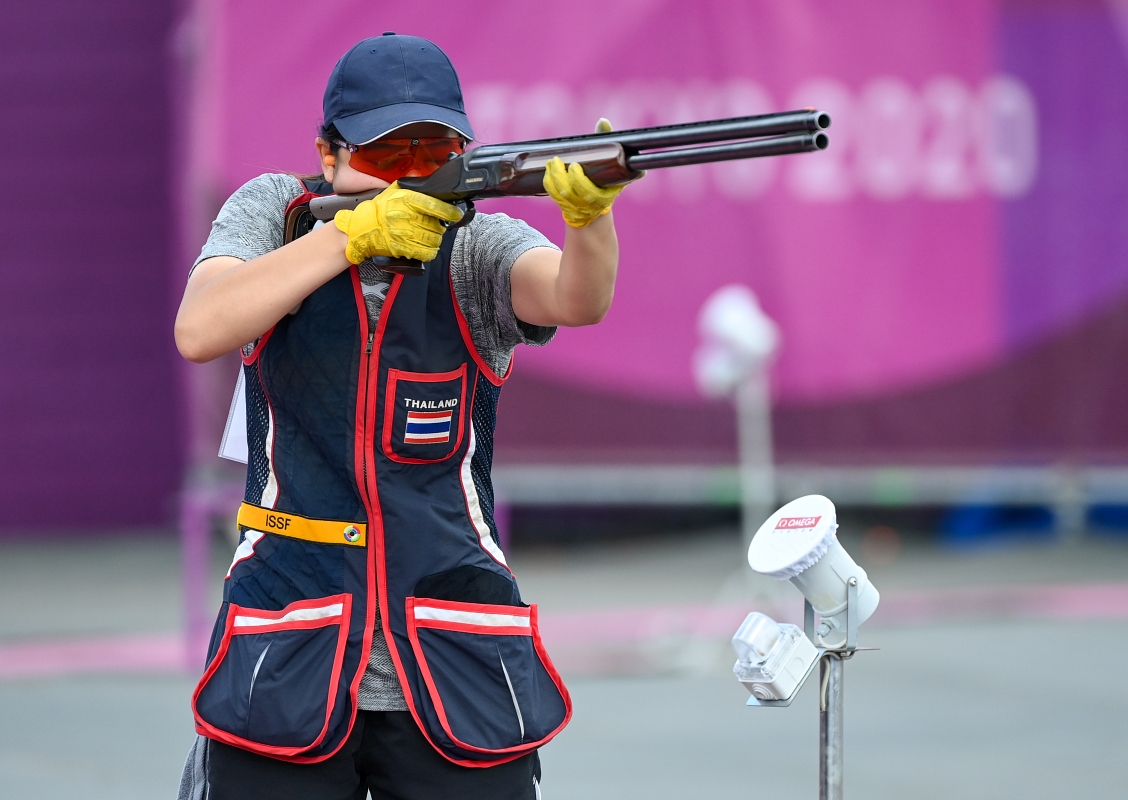 Unfancied Isarapa Imprasertsuk staged an impressive performance at the Asaka Shooting-Shotgun Ranges with a surprise fourth-place finish in womens skeet at the Olympic Games TOKYO 2020 on Monday.

Despite being an Olympic first-timer, the 2016 Asian Championships silver medalist shattered the odds to finish fourth in the qualifying competition and then shoot her way to fourth behind world No 2 Wei Meng of China (bronze), defending champion Diana Bacosi of Italy (silver) and 2018 World Championship winner Amber English of the US, who won the gold.

Isarapa, ranked a lowly 32nd in the world, earned a tilt at a medal after eliminating Natalia Vinogradova of the Russian Olympic Committee in the first shoot of the final and then Germany's Nadine Messerschmidt in the second.

In the third shoot, the Thai tied with Wei on 36 points. Results from the qualifying round were then taken into account and it was the Chinese shooter's remarkable 124 points to the Thai's 120 that propelled her to the top three. Wei's 124 points also marked an Olympic record and equalled her own world record, achieved at the 2019 Asian Shooting Championships in Doha.

Isarapa's fourth place was the best performance by a Thai skeet shooter, beating Sutiya Jiewchaloemmit's fifth at the 2008 Games in Beijing. Thai No 1 Sutiya who had a health problem did not make it to the final in Tokyo after being placed 11th with 118 points in the qualification round.

Said Isarapa: "I was under no pressure at all as other the shooters are all at world-class level while I'm just an underdog. Finishing fourth is beyond my expectation."

In badminton, world No 2 mixed doubles Dechapol Puavaranukroh and Sapsiree Taerattanachai were handed their first defeat in Tokyo  with a shock 12-21 19-21 result against Marcus Ellis and Lauren Smith of Great Britain in their last Group B match on Monday.

The Thai duo, who won three straight tournaments on home soil in January, were nowhere near their best against the inspired Britons who came up with intense attacks and solid defence. Despite their first defeat, Dechapol and Sapsiree move on to the knock-out stage as group runners-up.

"It makes a big difference going forward," said Smith of the British pair's win. "We knew after yesterday that this was a freebie game and that took the pressure off, it was ours to take and theirs to lose and I kept reminding myself of that," she added.