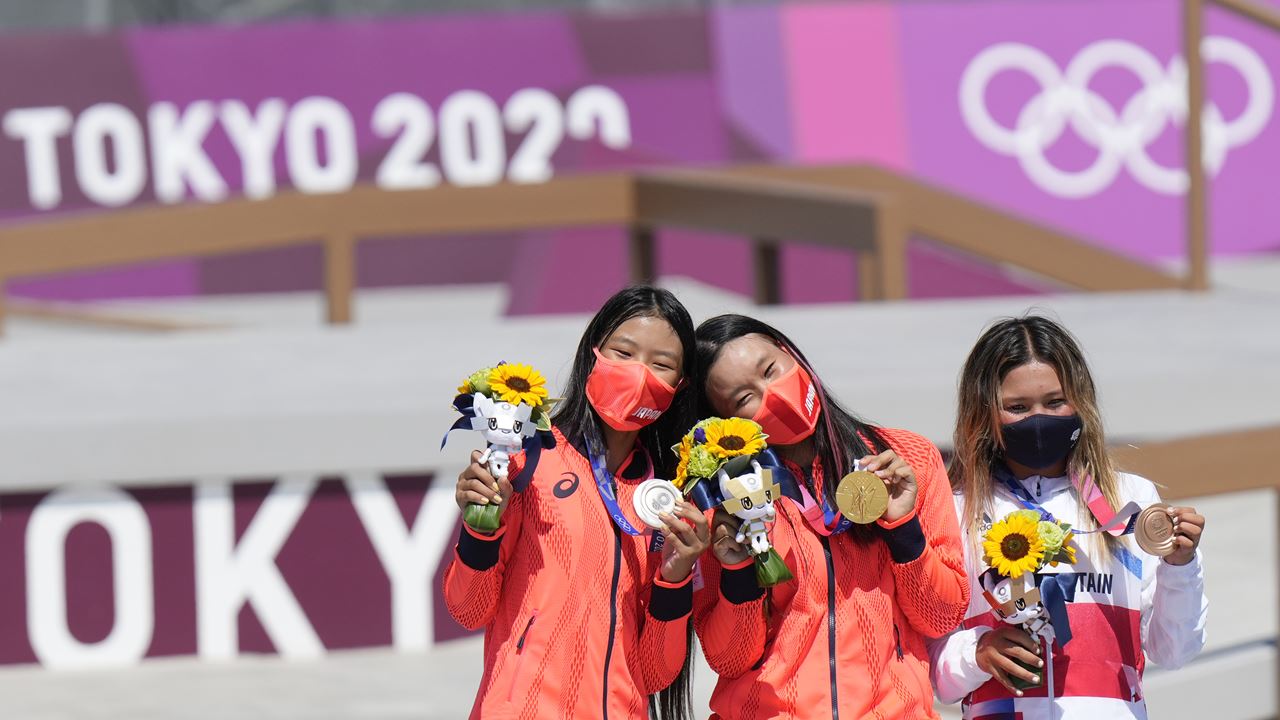 In women park skateboard, Tokyo youngest Olympians lean on each other

TOKYO - When 13-year-old skateboarding phenom Sky Brown spoke after winning her bronze medal in women park Wednesday in the scorching Tokyo heat, it wasnt her usual manner of public address.

Brown wasn't communicating directly to her audience on the video app TikTok (she has 1.3 million followers) or Instagram (she had 942,000 followers Wednesday morning and one million Wednesday afternoon). She was facing old-fashioned reporters, most of them men and most of them somewhere in the realm of at least 30 years her senior.

Brown, who lives in California, grew up in Japan and represents Britain thanks to her father's lineage, had support systems at the ready.

The first was her dad, Stuart, who was able to accompany her in Tokyo because Olympians under 16 are permitted to bring a guardian to the Games. He stood off to the side during her interviews Wednesday, beaming under his mask, helping to remind his daughter when she was asked what he told her before her final run of the day and had forgotten - "Winning this contest doesn't define you" - and stepping in to deflect questions from British reporters about his background - "This isn't about Dad, is it?"

The second of the bronze medalist's supporters was the gold medalist.

"Skyyyy!" Japan's Sakura Yosozumi sang with delight when she finished her own informal news conference and encountered Brown just beginning hers a few feet away.

Yosozumi, 19, who won with a score of 60.09 and the silver medalist Kokona Hiraki, 12, who had a 59.04, faced an even larger contingent of reporters than Brown because they won Japan its fourth and fifth skateboarding medals of the Tokyo Olympics. Hiraki had the added draw of being the second-youngest athlete of the roughly 11,000 at these Games.

"I'm so stoked! I can't believe it. It's unbelievable, it feels like I dream," said Brown, who earned third with 56.47. "I was definitely a little, like, I thought I was going to get it on the first or second run. I was a little shocked and a little like, 'Am I going to make it?' But Sakura, she really was like, 'You got it, Sky. We know you're going to make it. Go!' That made me feel better."

Women's park skateboarding made its Olympic debut Wednesday with some of the youngest athletes at these Summer Games. The ages of the eight finalists were: 12, 13, 15, 17, 19, 20, 21 and 23, all skaters who dropped into a roughly swimming pool-sized bowl with differently shaped concrete mounds rising out of the cavity and performed tricks. Runs lasted 45 seconds, with the best score of each skater's three runs determining her place in the standings.

The skaters brought speed, highflying tricks, turns and cool poses Wednesday. And they had in abundance something that is rare to see at an Olympic venue: exuberant friendship among competitors from different countries.

There is a lot of falling in skateboarding, especially in the park discipline. But skateboarding is perhaps the only Olympic sport where falling is, without fail, accompanied by rousing cheers.

When the Chilean Josefina Tapia Varas fell in the first heat of the day, she earned a fist bump from Brazilian skater Dora Varella, who shrugged, stuck out her tongue and drew rowdy applause from the other skaters when she then fell a few runs later. One of the largest roars of the day came when American Bryce Wettstein took a major spill in the final coming down a ramp and splayed, belly on the concrete. A one-time favorite to win gold, Misugu Okamoto from Japan was hoisted on her competitors' shoulders and feted after falling and finishing fourth.

"Skateboarding is such a good community," 17-year-old American Brighton Zeuner said. "I've known pretty much all these girls since I was 9, 8 years old, and just being here with them is absolutely surreal. . . . We're performers, and I think we need that good energy. It is competitive, but in a really healthy way. We're all just there to watch it unfold, do our very best."

Competitive skateboarding is a tight community already, bound by people who believe their sport is something closer to a lifestyle or art form than, well, a sport. That community is perhaps even closer knit among girls and women, who for years watched young White men received better promotion, bigger sponsorships and more opportunity to compete.

The X Games, the sport's biggest showcase before Tokyo 2020, didn't make women's park skateboarding an official event until 2003. This year's Olympians grew up learning to skate together. They are so supportive of each other that California native Lizzie Armanto chose to represent her father's country, Finland, because it left a spot open for another woman on Team USA.

"When I root for them," Wettstein said, "I root for myself."

Wednesday's final, with its constant cheering and hugs along with the flips and tricks, felt at times more like a presentation than a competition: Here, world, is what skateboarding is all about.

But there was competition and showmanship among the friendship, too. Yosozumi earned the highest score of the day on her first run in the final, a powerful, clean showing that displayed technical prowess, and she thrust both fists in the air when she landed one particularly difficult trick.

The diminutive Brown is flippier than most of her competitors, bending low to gather speed, then going for big air and flashy tricks - she fell in her first and second run trying to nail a stunt in which she flips her board horizontally in her hands while her feet hover in midair. She nailed it in a flawless third run to seal the bronze.

As Brown finally finished, she crouched into a ball on her board and held her head in her hands. When she popped up out of the bowl, Wettstein and Australian skater Poppy Olsen were the first to run over and celebrate, engulfing her in a hug. The two Brazilian finalists joined shortly after, followed by the rest of the young skaters standing nearby. No one was looking at the scoreboard.