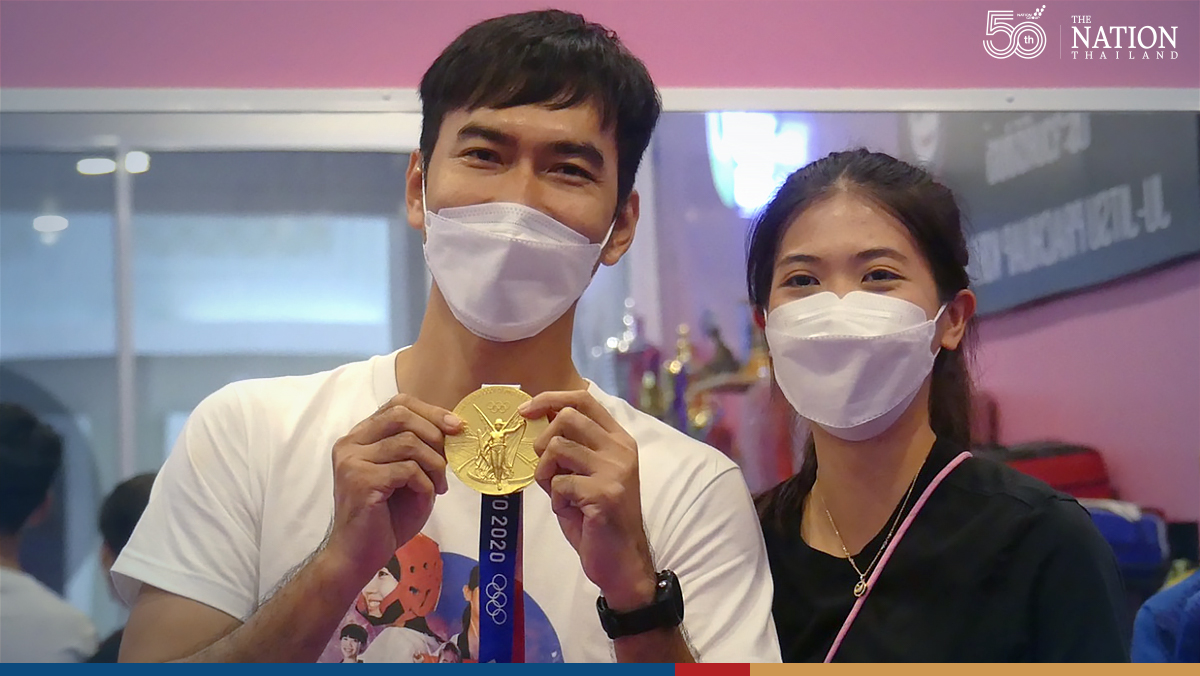 Amid the trappings of success, Panipak does not forget her first coach

Olympic gold winner Panipak Wongpattanakit on Saturday visited her first taekwondo coach, Songsak Thipnang, in Hua Hin to express gratitude for his role in her blossoming as a taekwondo champion.

Songsak had trained her to become a part of the youth national taekwondo team in 2011.

Acting Pilot Officer Panipak Wongpattanakit, also known as "Tennis", won the gold at the Tokyo Olympic Games in the 49kg women’s taekwondo.
On Saturday she along with her father made a personal visit to Songsak at Market Village in Hua Hin in Prachuap Khiri Khan province. Panipak also took along her Olympic gold medal.

She handed over the gold medal to her former coach and bowed before him. Both of them hugged happily after not having seen each other for a long time, as Panipak had been training hard for the Olympics, while Songsak had moved from Surat Thani to open a new school named “Huahin Taekwondo” for more than a year.

In a scene reminiscent of how her current coach Choi Young-seok had lifted her when the final competition result was announced at the Tokyo Olympics, Somsak gave Panipak back the medal and lifted her up.

The mayor of Hua Hin, Nopporn Wuttikul, offered Panipak a bouquet on behalf of the people of Hua Hin.
Panipak also signed autographs to coach Songsak’s students with a message: “Keep fighting, kids. I'm cheering for you,” written on the school’s board.

Panipak told the press that it was her intention to come and thank coach Songsak, the first coach, who had taught her when she was a child. His determination had inspired her to pursue the dream of becoming a youth national taekwondo athlete, and the goal of winning the Olympic gold, she said.
She said she was thrilled to see him after many years, and to now appear as an inspiration for the young generation in Hua Hin. She also gave Songsak a promise to stay committed to the sport.

Coach Songsak said that he was proud of Panipak's success.
"Tennis was a determined student and I knew that she would become a national taekwondo athlete. It has always been my dream to see my student succeed on the sports career path and to hear the Thai national anthem in world competitions. Today, Tennis has made this dream come true.

“I would like to tell all the youths not to focus only on Tennis’ achievement, but to see in wide perspective that at every step of success, there always are difficulties and obstacles. Success is  achieved when you perform at your best. My appreciation goes to Tennis who has brought happiness back to the sport of taekwondo, including to all Thai people amid this Covid-19 crisis,” said the ex-coach.

Panipak also gave an autographed photo and souvenir to the coach, and took commemorative group photos with the children before she travelled back.

Thai athletes fly off on quest for Tokyo Paralympics gold