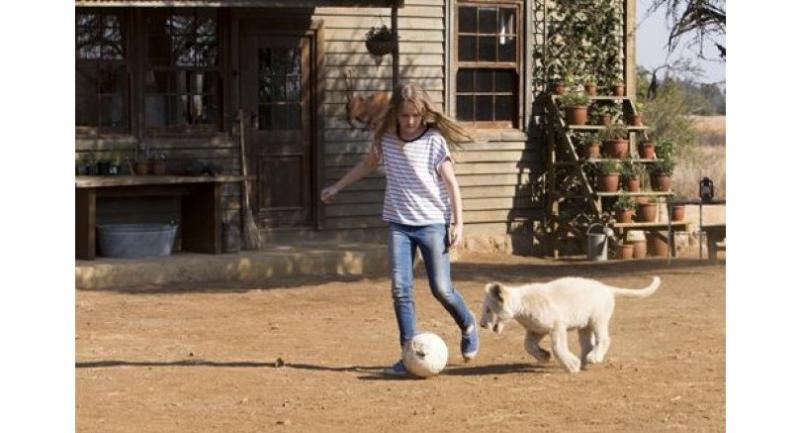 Felines play footy too: Mia (Daniah De Villiers) with Thor as a cub.

The story of a young girl uprooted from her life in London when her family decides to emigrate to manage a lion farm in Africa, “Mia and the White Lion” is a touching tale that will almost certainly please adults as much as children.

The film, which opens today at cinemas across Thailand, is directed by Gilles de Maistre. In a recent interview, he talked about his inspiration, his love for wildlife and the acting talent of his star, Thor the lion.

Where did the idea for the story come from?

It goes back years. I shot a series about children around the world who have deep bonds with wild animals for a French television documentary. My research took me to South Africa, where I filmed a child whose parents had a lionbreeding farm. They bred lions for conservation purposes – or so they claimed. The end goal was to sell them on to zoos and wildlife parks, to celebrate the king of animals in all its glory, and sometimes even to rewild them. There was a 10-year-old boy there who was in love with the lions. Once we finished filming and I left the farm, I found out that the lions were being bred for hunting.

This movie is about an 11-year-old girl called Mia, whose parents breed lions and she develops a bond with a white lion cub. The parents are witnesses to this deep friendship and start worrying about what will happen when the cub grows up. So they decide to sell him to hunters. And when Mia realises the truth, she decides to save the lion and help him escape the farm to a reserve where he might live out his days in peace. But the journey to get to this safe haven is complicated, to say the least.

It’s a family movie rather than a documentary, although there was a real-life friendship that inspired the relationship between the young girl and the lion we witness in the movie. It draws on a completely new and unusual way of working. We met over 300 kids in South Africa to find just the right actor. And we came across this little girl, Daniah. The first time she came head to head with a lion cub, she didn’t use her hands as we saw most of the children do, but her head. Our lion expert, Kevin Richardson, was convinced it needed to be her. Today, Daniah has grown up, and she’s now 14. The lion is no longer a cub, but a 250-kilo giant, and yet the two are still friends. I think it’s the first time anything like this has been attempted: telling the tale of a love story between a wild animal and apex predator, and a little girl, with no special effects. How did you meet Kevin Richardson?

Once I’d had the idea for “Mia and the White Lion”, my next question was: how can I make this happen? I’d already worked on a documentary about Kevin Richardson, called “The Lion Whisperer”. The man is just incredible, an international star who’s worked with over 100 lions over the past 20 years, dissolving the boundaries between human-kind and the animal kingdom to create authentic relationships between the two. When I spoke to him about “Mia and the White Lion”, he said: “This is going to be complicated, unless you’re prepared to film the movie over three years, using a very young lion cub. You’ll need to build a bond between the two and shoot the movie using the same lion throughout. But that’s impossible, you won’t have the time.”

And I replied: “Let’s do it anyway!”. Studio-canal and Galatee Films were excited and on board, and so that’s what we did!

They say that directing children and animals is hard for a director. And you had to do both, at the same time...

They also say that two negatives make a positive! But all joking aside, that saying is a little inaccurate. Regarding working with children, I met some truly exceptional kids on set: polite, sweet, smart, hardworking, brave... I was lucky.

And when it came to the animals, we developed a working method that’s completely different from how we tend to do things in the industry, approaching the lion as an actual actor rather than an animal we needed to tame. We built a relationship with the lion (Thor) from the moment he was born. Of course, the team kept more of a distance and by the end of the process needed to be in cages, but all the same, the lion became used to the cameras and mics. The younger actors worked with the lions on a daily basis.

It was more about creating an intimate relationship, fostering love, than training. And that gave our lion the confidence he needed to feel comfortable on set with our actors! Was this the first time anything like this had been attempted?

Yes. It was about immersion and creating habit and routine. The lion spent time with our actor every day, wandering around the set even when we weren’t filming.

And he was a real character! Kevin Richardson had never seen a lion as talented as our Thor. It might have been down to the time it took us to make the film and the atmosphere we had on set, but when we had to redo some takes, he was able to recreate the exact same thing, like a real actor.

Tags:
Mia and the White Lion Roaring to