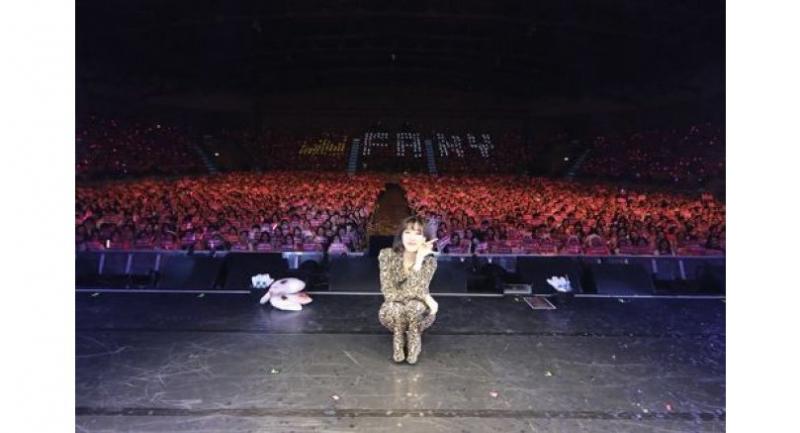 Tiffany poses for a photo with her supporters inside Thunder Dome.

Now in a new phase of her music career, singer Tiffany Young, who made her debut as a member of Girls’ Generation more than a decade ago, now prefers “being cool” to “being cute”.

That was the message she gave to her fan meeting in Thailand last week, when she sat and chatted with some 4,000 of her supporters inside Thunder Dome, most of them clad in Tiffany’s favourite colour of Pink.

The huge turnout – achieved despite a change in both date and venue for the fan meeting – marked an impressive start for the 29-year-old singer’s Asia Fan meeting tour. And for Tiffany, it was seemingly an amazing reunion with her Thai fans. Deafening screams echoed across Thunder Dome when Tiffany first appeared on stage in chic white attire and performed “I Just Wanna Dance”, confirming she was still their queen.

She then greeted the crowd with “Sawasdee kha” and smiled happily at her collaborators for the evening – DJ Jem – Jittrin Kulkallayadee, who took the role of MC, and Lalin Ketsilp, who served as interpreter.

Born and raised in the United States until the age of 15, Tiffany spoke in English but also sprinkled her interview with some Korean and Thai words to get closer to the audience. Her Thai fans, after all, first fell in love with her when she was a diva from one of South Korea’s most famous girl groups, Girls’ Generation.

During her years with the South Korean music label, she came to Thailand on many occasions, the last time being back in 2016.

“I am happy to be back,” Tiffany said, “I was very excited to perform for you”. The singer gets ready to create a special design on this white shirt.

She eagerly waved at members of the audience, some of whom were dressed up to the nines, even inviting one of them to stand in the spotlight to show her pink traditional Thai attire.

Tiffany said she enjoyed a fan-meeting event, because it gave her opportunities to really talk to her fans.

And so the audience heard a lot about Tiffany, who has now transformed herself into a solo artist and is signed with American music label Transparent Arts. The South Korean singer asks her fans to sing along to “Over My Skin” rendition.

“I feel supported. My fellow band members and fans had long known I wanted to go back home,” Tiffany said of her decision to leave South Korea for the US, adding that she still chatted with the Girls’ Generation members everyday. “Being apart makes us closer,” she quipped.

She also spoke about writing the lyrics of her new album’s just-released first single, "Over My Skin”.

The fan meeting then moved into the “Remember Me” segment, which featured Tiffany’s exclusive photos. Not only did she look gorgeous in the pictures, but she also shared with her fans why each of the shots was special to her. Two of them, for example, were pictures taken when she was a guest on the US radio programme (“KIIS FM”) and a TV programme (“Good Day LA”) for the first time after being a fan of both since childhood. There was also a photo of Soo Young and Hyoyeon, who volunteered to portray Tiffany’s best friends in her MV. As many as four Girls’ Generation said they were free on the day of the shoot, but these two were chosen because their funny character matched well with the song’s romantic-comedy theme. Tiffany added that she had recently visited Soo Young in her new house and tasted homemade budaejjigae, a well-known Korean dish.

The stage then shifted to Tiffany’s Big Data, with the star allowed to choose a word that appeared on screen and answer questions about it within five seconds.

Her first choice was “Thailand”. Asked what she loved most about Thailand, her answer was “Being here with you” and it drew loud cheers. Asked about her favourite food, she replied, “Thai candy floss”. Tiffany dances to her song.

Asked how to officially call her fans, Tiffany suggested it should be “Young One” because the sound resonated with her Korean name and sounded like the words that meant “Forever” in Korean.

Next, Tiffany was challenged to add a design of her style to a white shirt within three minutes. She did it nicely by painting its collar and sleeve rims with pink. She then wrote a line of her upcoming song, “Teach You”, on the pocket. A lucky draw was held to determine who among the audience would get this unique shirt. More lots were also drawn for the exclusive gifts Tiffany had brought along that were designed for her Asia Fan Meeting tour.

Tiffany then took a break while fans watched behind-the-scene footage of her music video. Back on stage, she performed “Talk” and “Fool” from her “I Just Wanna Dance” album.

Speaking directly to her fans, Tiffany told them that this was the first big-scale show she had performed in one year.

The diva said she was not good at public speaking and thus felt more at ease to deliver her messages via her songs, a statement she proved by singing “Remember Me” from the Disney animation “Coco”.

Another clip was then screened showing the singer preparing for her MV while in real time she prepared to perform “Over My Skin” live. When she returned to the stage, she was in a tigerskin-pattern outfit, her voice powerful and her dance moves sensual.

Then it was time to say goodbye and Tiffany asked her fans to pose for a picture together.

But to her surprise, Thunder Dome suddenly fell dark and the giant screens lit up with a clip she had never seen – a compilation of pictures and VDO recordings of her on various occasions with “Remember Me” as background music.

Obviously made with love, Tiffany was moved to tears, sitting on the stage with her eyes glued to one of the screens. It was only when the clip reminded her to look back whenever she needed support that Tiffany turned to find all her fans waving messages reading “Keep our love alive” and “I’ll never fade away”.

By then, despite trying her best to look cool and repeatedly saying that she would not get “emotional”, she shed tears of joy.

And so, just like Tiffany herself said, the fan meeting in Bangkok was “unforgettable”.