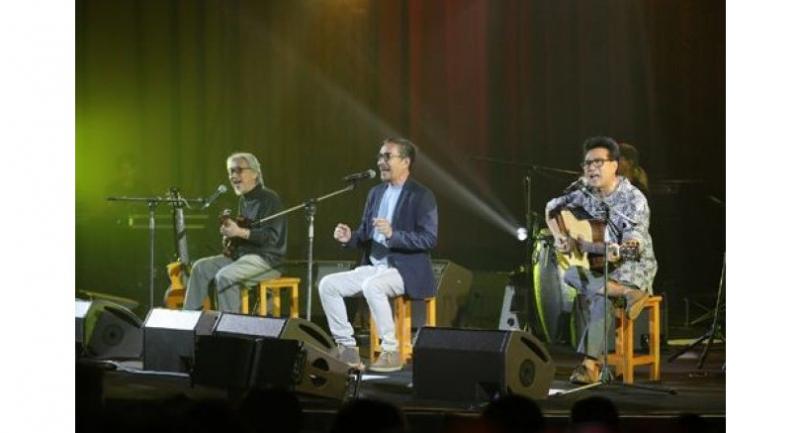 The “prehistoric boy band” in action.

Two veteran singers and a seasoned music producer collectively known as the Duek Dam Ban Boy Band were back on stage at Bangkok’s classic Scala Theatre last Saturday for their third concert in as many years.

The trio – whose name means ancient or prehistoric in a reference to their ages – received a warm welcome from their fans, keeping them all thoroughly entertained during two and a half hours of song and laughter.

The 1,000-seat hall was filled to capacity, with two extra rows of seats placed along the aisles next to the walls to cater to the crowd. The trio are joined by guest singer Kob Songsit during the encore.

Veteran singers Paiboonkiet “Pun” Khiewkaew and Charas “Tam” Feungarom, and long-time music producer Ponthep “Tun” Suwannaboon have been friends since their university days back in the ’70s.

Charas, 68, Paiboonkiet, 66, and Ponthep, 67, have been in the music industry for more than three decades giving the trio a combined experience of well over a 100 years. Both singers began their career in the early 1980s and most of their successful works were produced by Ponthep, who has been involved in the composition, arrangement and production of countless bestselling albums.

The concert, organised by BEC-Tero Entertainment, started with the three veterans walking down from the back of the hall towards the stage, each taking a separate isle, to loud applause from fans. Tam Charas did most of the talking during the concert.

They began their set with “Kon Khi Ngao” with Charas singing, Paiboonkiet and Ponthep playing guitars and doing the chorus. Paiboonkiet then crooned his hit “Fao Koy” with just as much vocal power as in his heyday and Charas and Ponthep joining him in the chorus.

A host of hits by both Charas and Paiboonkiet followed, with the added vocals giving golden oldies “Rak Lon Jai”, “Oh Jai Oey” and “Thale” a new lease on life. The fans sang along and applauded long and loud to show their appreciation. Thundering applause and cheers greeted actor/singer Songsit “Kob” Roongnophakunsri as he came on stage to sing hits “Kheed Sen Tai” and “Patiharn”, with the trio again providing the chorus. His fans sang and moved happily in their seats.

Music backup was provided by the five veteran musicians making up the NangLen Band whose popular covers of Thai pop songs have drawn millions of views on YouTube.

Later that night, Charas and Paiboonkiet took turns to sing a long set of songs, mostly made up of their old hits and numbers they wrote for other well-known artists of yesteryear. Charas did most of the talking during the concert, joking with the audience and teasing his colleagues on stage and fans about their ages. He also encouraged audience members to repeat funny extra lyrics after him.

With Saturday night’s show the first to reach sellout status, Charas joked that he hoped the trio would be back for a fourth concert next year. And judging from their reactions that night, most of the fans were in full agreement.