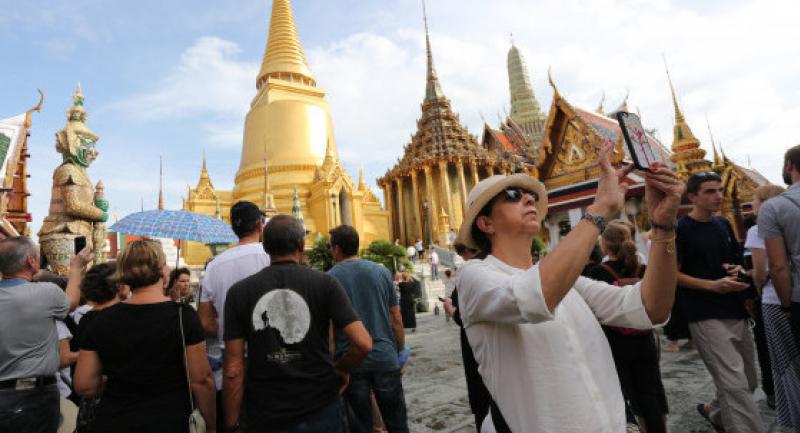 Tourists flock into the Temple of the Emerald Buddha inside the Grand Palace yesterday, as this was the first day they were allowed to visit the Temple since the distribution of tickets was suspended on October 14, after HM the King passed away. Visi

WHEN Wat Phra Kaew – Temple of the Emerald Buddha – reopened its doors to tourists for the first time in weeks yesterday, most foreign visitors showed respect for Thai culture and an understanding of the mourning period for the beloved King Bhumibol.

Tourists appeared sombre compared to their usual behaviour in the Palace grounds.

Lecointre and his partner Marie Renard, 34, added that they were amazed by the close ties between Thai people and the monarch.

“In France, we have no king. We have no idea to what extent people can love and revere a king. It’s so amazing for us to see how the people here respect the monarch. The national one-year mourning period after his passing also surprises us. In our country if a very important figure dies, the mourning period could be just up to about two weeks,” Lecointre said.

The Temple of the Emerald Buddha, a famous landmark in Bangkok adjacent to the Grand Palace, where the late King’s body rests, had been off limits to tourists since October 14.

“I plan to leave Thailand tomorrow and fortunately the temple opened today, otherwise I would not have had a chance to visit here,” Spaniard Pablo Romero, 33, said yesterday.

Tourists who came to the Temple yesterday saw huge crowds of mourners wearing black queuing to pay their respects to the late King inside the Dusit Maha Prasat Throne Hall at the palace.

The lines of tourists and mourners were separate as they entered the Grand Palace from different gates. Wisetchaisri Gate has been set aside for tourists from 8am to 4pm, while mourners enter the palace via Manee Nopparat Gate during the day and are only allowed to enter via the Wisetchaisri Gate between 4pm and 9pm.

“We plan to spend our holidays here, let’s say for leisure purpose. When it turns out that the country is in the mourning period, it’s fine. We do understand,” said Anke Schuster, 40, from Germany.

Schuster and her six travelling companions all said they felt sorry about the King’s passing and realised how they should behave.

Pornchai Sea-lee, a tour guide leading a group of Chinese tourists at the temple, said he had informed his group about appropriate attire and the code of conduct for tourists during the mourning period when visiting such royal attractions

“We can feel the grief covering the country. We appreciate the people and management here. Visiting here, all authorities welcomed and facilitated us,” said Wang Bi Bong, 27, a Chinese tourist on Pornchai’s tour group.

The Ministry of Tourism and Sports assured tourists yesterday that they could conveniently visit the Temple despite the big crowds of mourners in the adjacent area.

Anan Wongbenjarat, deputy head of the ministry’s Department of Tourism, said tour buses could easily drop tourists at designated spots such as in front of Royal Rattanakosin Hotel at Saphan Chang Rongsi Bridge.

There are shuttle buses between the designated spots and the Temple.